“The greatest missionary is the Bible in the mother tongue. It needs no furlough and is never considered a foreigner.” —William Cameron Townsend (1896-1982) Prominent Christian missionary in South America and founder of the Wycliffe Bible Translators and The Summer Institute of Linguistics 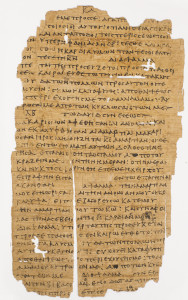 This spring in the Braccio di Carlomagno (Charlemagne’s Wing) at the top left of Bernini’s colonnade when facing St. Peter’s Basilica, a free, blockbuster interfaith exhibition, “Verbum Domini II: God’s Word Goes Out to the Nations” has been on display (Hours: Monday, Tuesday and Thursday-Saturday 9 AM -6 PM; Wednesday 1 PM-6 PM; holidays and Sunday closed except the last Sunday of the month: 1 PM- 6 PM). It’s a sequel to Verbum Domini I, which was displayed here from March 1 to April 15, 2012.

According to Clifford Keister, an official of the Green Collection based in Oklahoma City, the main sponsor of both exhibitions, the first exhibition “more or less told the story of the Jewish and Christian contributions to the formation, preservation and propagation of God’s Word.” He continued: “The exhibit’s 150 or so items, mostly on loan from private collections, recounted the history of the Bible’s production through the ages. They highlighted the efforts of many brave Bible scholars, some of whom lost their lives in the sometimes-dangerous work of Bible translation. Instead, Verbum Domini II recounts how the Word of God, the Bible, has spread geographically even to the moon and cyberspace, and how it will continue to spread throughout the entire world.” 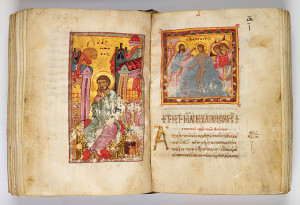 Miniature depicting St. Mark the Evangelist and the Baptism of Christ opening the Gospel of Mark, Four Gospels with Kephalaia, in Greek, copied by Manuel Hagiostephanites for John of Crete, archbishop of Cyprus, dated 1156.

Verbum Domini II’s brochure gives us the following statistics: “Out of the more than 6,900 languages spoken around the world, 513 languages currently have access to the entire Bible, while another 2,304 languages have access to some portion of the Bible… It continues to be translated into new languages every day.

“Currently, there are 2,617 translation projections underway, and these modern-day projects face many of the same challenges historic translations of the Bible encountered, such as political opposition and groups with no formal system of literary or written language. Nevertheless, there are still approximately 2,900 languages, representing more than 180 million people worldwide, that do not have the Bible.”

Yet, as the exhibition’s press release recounts: “Throughout history, no one book has had a broader influence than the Bible. Jews and Christians from every corner of the globe have worked together to preserve their scriptures and share its message with the people they encountered. World leaders throughout history, from Constantine to Charlemagne, have championed the transmission of the Bible. Along the way, the Bible has been made accessible to different cultures while still remaining true to the original Greek and Hebrew text. Over the last two millennia, this transmission, translation, and dissemination of the Bible has shaped and reshaped the history of the world.” 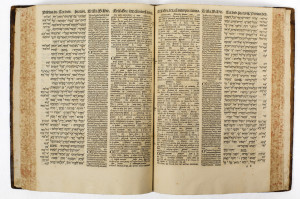 Verbum Domini II’s more than 200 rare and historical artifacts are on loan from the Abbey Library of St.-Gall in Switzerland; the American Bible Rare Bible Collection on loan to the Museum of Biblical Art, New York; the Vatican Library and the Vatican Museums; the Bridwell Library Special Collections, Perkins School of Theology at Southern Methodist University; Fürstliche Bibliothek Stollberg-Wernigerode; Gilcrease Museum, Tulsa, Oklahoma; Laurentian Library in Florence; Mart Green (the founder and CEO of Mardel Christian and Educational Supply and of the film company Every Tribe Entertainment, and an heir to the Hobby Lobby family of companies founded by Mart’s father, David Green); the Italian Ministry of Culture; The Museum of the Bible, which will also be a center for scholarly research and is scheduled to open in Washington, D.C., in the spring of 2017; the Smithsonian National Air and Space Museum, also in Washington, D.C.; The Green Collection; The Master and Fellows of Corpus Christi College, Cambridge; The Syndics of Cambridge University Library; and the Timken Museum of Art, Putnam Foundation Collection, San Diego, California. They’re divided into 12 galleries and shown in chronological order: “From the Greek World,” “To Northeast Africa,” “To China,” “To the Latin West,” “To the British Isles,” “Into Mass Production,” “To Central and Eastern Europe,” “To North America,” “To All Nations,” “To the Huaorani Tribe of Ecuador,” “To The Moon,” and “Into the Digital World.”

In order to bring the artifacts to life, some of the 12 galleries are set in immersive environments: 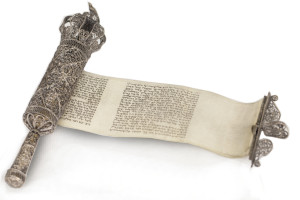 (1) A scene from ancient Alexandria, Egypt, where the Jewish texts of the Old Testament were translated into Greek as early as the 2nd century A.D.

(2) The Church of Saint George — a monolithic building in the shape of a cross, carved from a single piece of rock — in Ethiopia, where the Christian tradition has thrived since the conversion of King Ezana in the 4th century.

(3) Sainte-Chapelle in Paris, a 13th-century Gothic chapel, where more than 6,456 square feet of stained glass conveyed the story of the Bible to medieval Christians.

(4) Gutenberg’s print shop in Mainz, Germany, complete with a working replica of the Gutenberg press.

(5) The Huaorani village, deep in the rainforests of Ecuador, where interviews with members of the Huaorani tribe relate the story of Operation Auca, an attempt by five American missionaries to bring Christianity to this isolated tribe, known for its violence against its own people and outsiders. In fact, the missionaries were murdered in 1956, but their deaths galvanized US missionary efforts and sparked an outpouring of funding for evangelization efforts around the world. Several years later, the widow of one and the sister of another murdered missionary returned to Ecuador with the Summer Institute of Linguistics to live among the Huaorani. This eventually led to the conversion of many, including some of those involved in the murders.

“Named for the family who founded the American arts and crafts retailer Hobby Lobby,” the press release continues, “the Green Collection is one of the world’s largest private collections of rare biblical texts and artifacts. Scholars have scoured the world to assemble the more than 40,000 biblical antiquities that today comprise the collection.” (For more details read Wikipedia’s article: “The Green Collection.”)

Its highlights on display here include:
—Three fragments from the Dead Sea Scrolls.
—Five pages from the Bodmer Psalms Codex, a near-complete copy of the book of Psalms in Greek on papyrus from the 3rd to 4th century A.D.
—Pages from the codex Climaci Rescriptus. In an attempt to recycle the valuable parchment, the 9th-century Syriac texts were written over Christian texts from the 6th to the 8th century, most of them in Aramaic, a dialect of Jesus’ household language.
— The 14th-century Hours and Psalter of Elizabeth de Bohun, countess of Northampton, one of the most extensively illuminated manuscripts of its kind.
— A first edition of the King James Bible of 1611, the most influential translation of the Bible ever produced in English.
— The Lunar Bible, one of the 100 Bibles on microfilm that were flown to the moon’s surface with astronaut Edgar Mitchell on Apollo 14.
— A miniature German New Testament of Martin Luther’s translation printed in 1558/1561, containing more than 40 contemporary, hand-colored woodcuts.
— The Eliot Bible of 1685, a second edition of the first Bible ever printed in America.
Other treasures include:
— A double page from the Codex Vaticanus, the oldest surviving manuscript of the complete Christian Bible, dating from c. 325-350 A.D., on loan from the Vatican Library.
— One of the 13 Torah Scrolls from the Jewish community in Kaifeng, China, on loan from Bridwell Library Special Collections, Perkins School of Theology, Southern Methodist University.
— A Latin Tours Pandect Bible, produced under Alcuin of York in the 9th century at the Abbey of St. Martin at Tours, on loan from the Abbey Library of St.-Gall, Switzerland.
— The Bath Old English Gospels, a complete 11th-century translation of the Gospels into Old English, on loan from the Master and Fellows of Corpus Christi College, Cambridge, and on display outside of England for the first time. 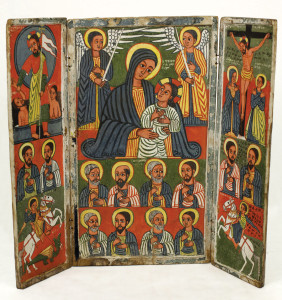 Triptych of the Virgin and Child, Gondarine School, tempera and gesso on wood, Ethiopia, 17th century.

Non-literary artifacts include an ancient Roman marble child’s sarcophagus front with Biblical scenes; three large brass 18th-century Ethiopian processional crosses; three Ethiopian icons; wood blocks used in the printing of the first edition of Arabic Gospels; a 16th-century Russian icon of the Nativity; several 19th-century Russian silver yads (Hebrew for hand) with enamel inlays so the reader would not touch the Word of God; a 19th-century silver Chanukah Menorah, and Tefillin covers with engraved flower designs that contain pieces of parchment inscribed with Torah verses (both from Ukraine); a 19th-century Russian Kiddish cup and Besomin; a pair of doeskin beaded moccasins made by Mary Ross, wife of the longest-serving (1828-66) Cherokee chief, John Ross; and a Huaorani tribe wooden blow gun and quiver of darts.

“Verbum Domini II is an exhibit created especially for display at the Vatican,” Alisha Wadsworth, marketing coordinator of the Museum of the Bible, told me. “It will not be traveling to a further location.” The exhibit catalogue is available for $29.95 online from www.store.explorepassages.com. Currently, the Museum of the Bible has an exhibition entitled “Book of Books” at the Bible Lands Museum in Jerusalem, which will be on display until October 25.