The Latin-rite Patriarch Calls for Fasting for Peace

The Latin-rite Patriarch Calls for Fasting for Peace

Dear Brothers and Sisters in Christ,

“Grace and peace be with you all!”

We read in the Gospel that “Jesus fasted for forty days and forty nights.” (Mt 4:2)

This fast very likely took place in the desert region four kilometers northwest of Jericho, on a mountain named “Quarantena” (or Quruntul in Arabic). In the 12th century, the mountain belonged to the Latin Canons of the Holy Sepulcher, and was inhabited by a group of clerics named the Brothers of the Forty Days.

Once more, our Church of Jerusalem may speak not only about history, but also of the geography and the topography of salvation. This site, not far from Jordan, is a place of pilgrimage not only for Christians coming from afar but also for the local faithful who are invited to visit the sites of our Redemption with piety.

A Fast which the Lord Did Not Need!

Latin Patriarch Fouad Twal of Jerusalem pictured in the Church of the Holy Sepulcher before Easter Mass in the Old City of Jerusalem, April 12, 2009 (CNS photo)

In theory Jesus could have miraculously dispensed with food; but “he had to become like his brothers” and sisters — other men, and “has similarly been tested in every way, yet without sin.” (Heb 4:15) Neither his fast, nor even his baptism from John, satisfied any kind of personal necessity. In contrast, penance, fasting, reconciliation, with prayer and almsgiving are indispensable for us for the atonement of our own sins. However, there is an essential difference: we have in the fast of our Lord, a magnificent example for ourselves. We cannot fast for forty days and forty nights “without anything to eat;” but during Lent the Church undertakes to re-enact the time passed by Christ in the desert in prayer and fasting. The intention of the Church is clear: “to imitate Christ” (1 Cor 11:2) who “wished to serve as an example,” not only in the washing of one another’s feet (Jn 13:15) but also in every other domain.

Our fast intends to imitate that of Christ, who himself followed the example of Moses who fasted forty days before receiving the tablets of the Commandments. (Ex 34: 28-29) Elijah also fasted for forty days before his encounter with the Lord on Horeb. (1 Kgs 19:8) During the transfiguration of our Lord on Mount Tabor, it was precisely these two figures, who had fasted forty days, who appeared beside the Messiah in glory.

A “Preventive” and Atoning Fast

In his 2009 Lenten message, Pope Benedict XVI raised the question of what value and sense there might be for us Christians today in depriving ourselves of food and drink, both being necessities for our health and survival. He responded with support from Holy Scripture and Christian Tradition that a fast is an important undertaking for the avoidance of sin and all that might lead us to it.

In his Lenten message for 2011, the Pope denounced greed, as if men wanted to “devour the world.” He stated, “We are often faced with the temptation of accumulating and love of money that undermine God’s primacy in our lives.” In 2008, he courageously said: “According to the teaching of the Gospel, we are not owners but rather administrators of the goods we possess: these, then, are not to be considered as our exclusive possession, but means through which the Lord calls each one of us to act as a steward of his providence for our neighbor.” Through this sharing and in communion, we live as in the early Church of Jerusalem. (“Apostolic Life” of the Early Christians in Acts 2 and 4; 2 Cor 8 and 9) The beloved apostle, John, wrote with severity: “If someone who has worldly means sees a brother in need and refuses him compassion, how can the love of God remain in him?” (1 Jn 3:17)

The Holy Father’s Message for Lent this year takes the theme: “Let us be concerned for each other, to stir a response in love and good works.” (Heb 10:24) Pope Benedict stated that “Christians can also express their membership in the one body which is the Church through concrete concern for the poorest of the poor. Concern for one another likewise means acknowledging the good that the Lord is doing in others and giving thanks for the wonders of grace that Almighty God in his goodness continuously accomplishes in his children.”

For us sinners, mortals constantly confronted with our failures, fasting is an effective way to demonstrate our repentance and the desire to set right our failings. “It was in this way that after Jonah’s warning, through penance and fasting the Ninevites avoided God’s wrath and were granted His mercy.” (Jonah 3:10)

Jesus gives us a framework for fasting and almsgiving: that they are to be carried out secretly and discreetly, without pretension, (Mt 6: 3-4) showing outwardly neither misery nor mortification. (Mt 6:16) This does not in any way contradict the public and communal character of these practices in the Church, but rather is necessary to spurn individual excess and caprice.

Later, Jesus will expound on the Christian fast, in contrast with that of the Pharisees and the disciples of John: Christians, as relatives of the Bridegroom, “will fast in those days [when he is taken away from them]” and raised on the Cross. (Mk 2: 19-20)

This is why the first Christians fasted during the Sacred Triduum. Subsequently, they fasted every Wednesday and Friday. (The Didache, Ch. 8)

Penance is a healthy practice. Indeed, it calls for a healthy attitude, which is a “return” to the Lord and to his goodness; a return “to the Father” like the prodigal son. (cf Lk 15) In fact, the verb toubou in Aramaic and Arabic means “return.” This call by the Baptist and the Savior is significant. It is there, near the Jordan River and the rest of this desert region, where the presence of God is marked in the emptiness and splendor of nature! 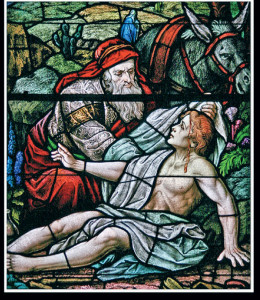 A stained glass window illustrating the parable of the Good Samaritan

A Fast of Conversion of Persons and Peoples

In the tradition of the Church, Lent is a preparation for the Easter Triduum, the “days during which the Bridegroom will be taken away from among us” (Mt 9:15) and raised on the Cross.

Lent is a forty-day journey, symbolically representing the forty years of the Hebrew people in the desert — it is a call:

a) To meditate on the mystery of the Cross, that we might conform ourselves to the death of Jesus (cf Rom 6:5) in light of a radical change in our lives;

b) To be docile to the action of the Holy Spirit, who will transform us, as he transformed Saul of Tarsus on the road to Damascus;

c) To adapt our lives with determination to the will of God, freeing ourselves from any egoism, lust for power, or avarice, by opening our hearts to the love of Christ and neighbor, especially the poor and indigent. Lent, as the Holy Father reminds us, is a providential time for us to recognize our frailty and welcome reconciliation, in order to orient ourselves to Christ.

Lent this year is between two Episcopal Synods of extreme importance. The first was the Special Assembly for the Middle East in October 2010, and the next is in October this year, for the New Evangelization for the Transmission of the Christian Faith. As with ecumenism which aims at reconciliation in light of the unity of Christians, it is “the conversion of the heart” which, by the grace of God, is the key to seemingly impenetrable problems and the end to ostensibly ceaseless and irreparable hostilities. This conversion rests on the understanding that “man does not live on bread alone but by every word that comes forth from the mouth of God,” (Mt 4:4) that “the flesh [alone] is of no use,” and one must “watch and pray that you may not undergo the test.” (Mt 26:41) In this case, fasting is an excellent antidote to the many excesses of every day.

Is this not a great time for the people of our region, constantly in conflict, to “return” to the Lord, by the application of the Ten Commandments, especially respect for life, for property, and for human rights? Would the solution not be in a metanoia, in upheaval, in radical change, whereby the good of the nations supersedes the interests of some leaders and authorities to the detriment of their people? 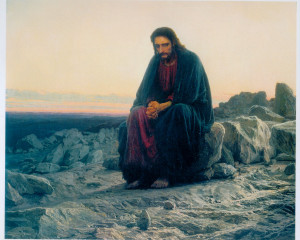 A Fast in a Time of Crisis

In the midst of difficulty and adversity, we must act with wisdom while helping one another. Pope Benedict has stated without hesitation from the advent of the global financial crisis that those who construct on money build on sand. The Holy Father on several occasions has underlined that the fundamental crisis is one of values and ethics, following a crisis of faith.

Our Fast: A Means, Not an End

We do not fast simply to fast. We fast to imitate Christ, to be conscious of those who hunger and thirst. As proclaimed by the fourth Preface for Lent: “For through bodily fasting you restrain our faults, raise up our minds, and bestow both virtue and its rewards, through Christ Our Lord.”

In the Holy Land and throughout the Middle East, we continue to suffer from violence and conflict. Peace is one of the greatest graces that the Lord gives to humanity.

With the birth of the Savior, who is Peace incarnate, in Bethlehem-Ephratha, (Mic 5:1, 5) the angels sang “peace to those on whom His favor rests.” (Lk 2:14)

The Lord asks us to work for peace, and if we achieve it, he commends us with compassion and gentleness. (Beatitudes, Mt 5:3, 9)

Before his Passion, he declared to his disciples: “I leave you peace, my peace I give you.” (Jn 14:27) In his crucified Body, Jesus abolished the separation wall between peoples (Eph 2:14) by establishing peace.

It is this peace that we hope to achieve by the grace of God, to which we dedicate our prayer, our penance and our fast. 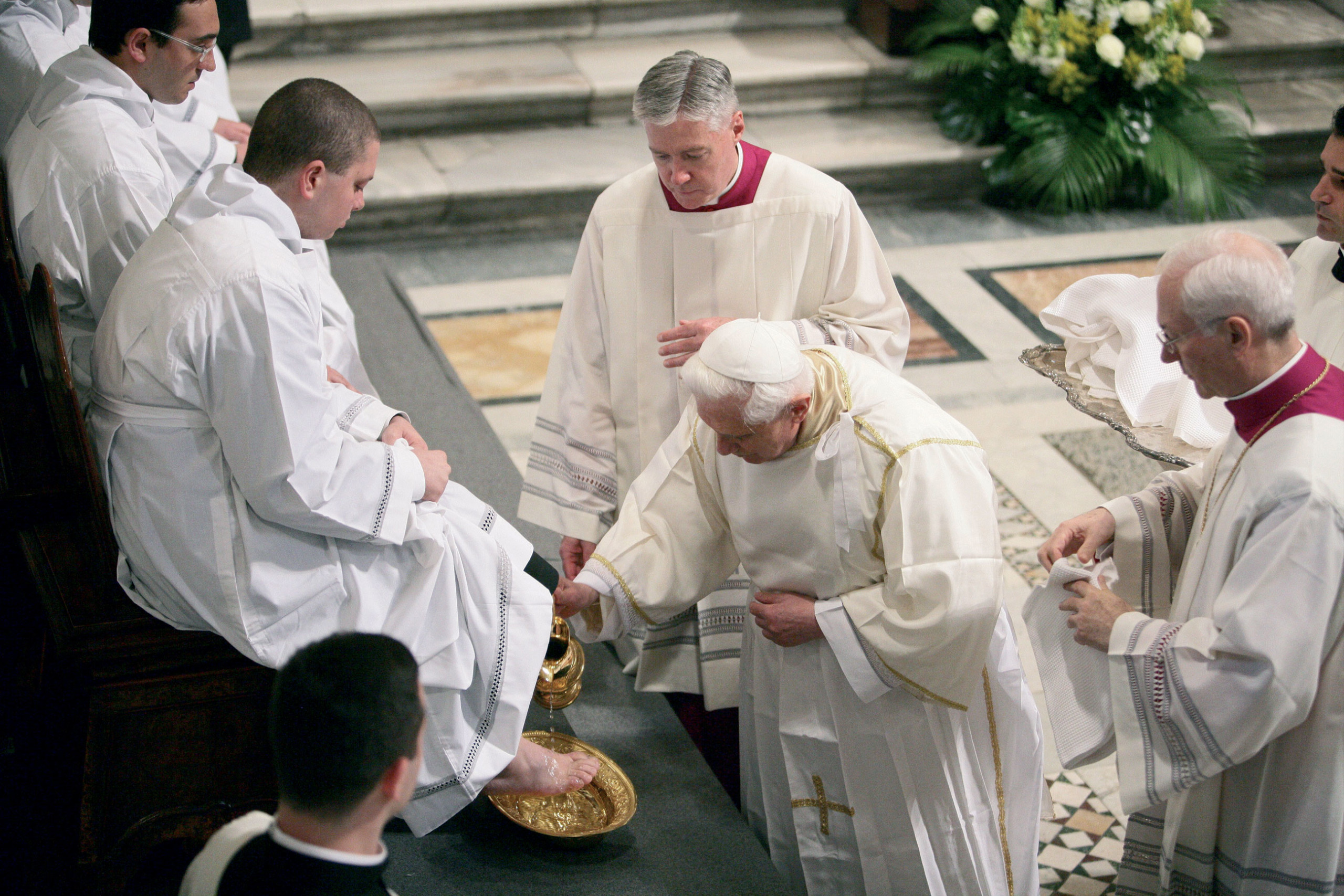 The Church demands a minimum of fasting and abstinence as follows:

a) Those above 14 are asked to abstain from meat on Fridays during Lent, during the time of the Passion, and on Ash Wednesday.

b) Those between 21 and 60 are urged to be satisfied with only one meal per day. The sick and elderly are excused from this practice.

c) In addition to abstinence and fasting from certain foods and drinks, it is the “spiritual” fast which most pleases the Lord: that our sense of “fasting” extends to refusing sin, “in word, act, and omission.”

d) During Lent, it is advised to avoid succulent meals and alcoholic beverages. It is suitable to abstain from or limit smoking. To promote an atmosphere of contemplation and of piety, it would be beneficial to avoid or reduce viewing spectacles, especially on television and the internet.

e)  So that charity and almsgiving might accompany our fast, we suggest that the fruit of our sacrifices and renunciations be offered to the poor, and to a vital project for our diocese. I propose, in particular, donations for the construction of the Church of the Baptism of the Lord and the adjacent convent on the Jordan.

In the Mother Church of the Holy City, the city of Calvary, of the empty tomb of the Resurrection, of the Church of the Ascension and of Pentecost, we pray with fervor. We plead that the Lord accept our penance and include us, in spite of our weaknesses, “in the procession of his triumph” over evil, sin, and death. (Eph 1:15-23) And “that the Lord, creator of heaven and earth, bless you all the days of your life.” (Ps 128:5)

I wish all of you a holy Lent and a happy Easter!