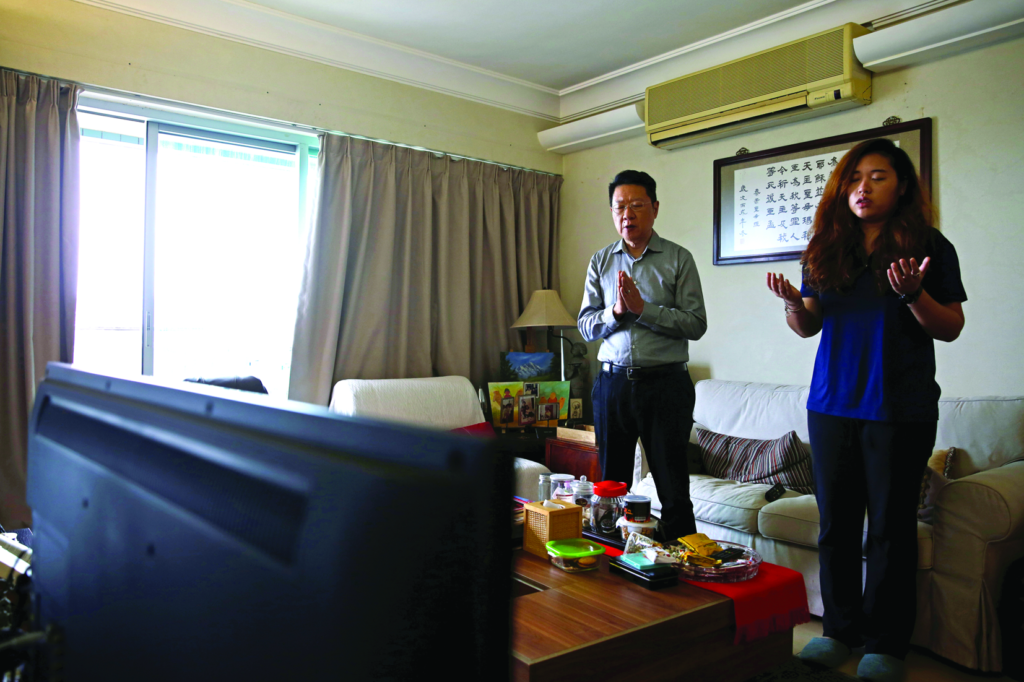 Stephen Wong and his daughter, Amanda, participate in an online Mass at their home March 8, 2020, after the Diocese of Hong Kong temporarily suspended public Masses in churches, following the COVID-19 outbreak. (CNS photo/Tyrone Siu, Reuters)

“During this dark time, I have learned to trust God without any doubts”

2020 seems like a year in which much trust in the Lord is needed. The COVID-19 came into our lives suddenly, and it still remains; the whole world still being shut down. A believer would ask: why COVID-19? Why does God allow it to happen? Is it a divine punishment for us?

As a Chinese Catholic, I have a special testimony that I would like to share with readers during this difficult time. The Catholic Church in China has been on lockdown from January 24 onwards and it remains closed even now. However, the lockdown does not prevent the faithful from practicing their faith in different ways.

My understanding of this pandemic is that it is absolutely not a punishment from God, but that it does give us an occasion to rethink what it means to us to be Catholic. We should remember, God would never bring evil to us, He wants to save all souls.

St. Thomas Aquinas in his profound work Summa Theologiae (I, 49, a. 2) asks whether the supreme good, God, can be the cause of evil? We should know that he cannot; God is the highest perfection, and evil consists of a defect in action or agent — thus God cannot be the direct cause of evil.

Personally, this time enabled me to participate in the suffering of Christ, and by this participation, I understood that this pandemic turned out to be a kind of blessing in my life. During this dark time, I have learned to trust God without any doubts. Because I know His plan for me will be the best plan for my life, and this is because He knows me in a most excellent way.

During the day, I started with the Liturgy of the Hours followed by the Rosary. In these days it seemed that the Lord slowed down our feet in order to help us to realize what it does mean to be a Christian…, it does not just mean daily prayer and the liturgy, but also good works and charity. Thus, as a Christian, I have joined a local volunteer job team to serve people who are in need during this unusual time.

The job was not very difficult; however, it entailed certain dangers: my duty was to serve at a local small hospital twice a week. When I was on duty, I needed to check the temperature of people who came to the hospital, and obviously all volunteers were required to use medical masks during the whole time. I remained in this job for two weeks. During the time at the hospital, I witnessed the testimony of many doctors who did not fear death and helped patients, trying to save their life, and I realized that these must be some of the loveliest people in the world.

After the volunteer job, I opened online courses for people who are interested in the Catholic philosophy and theology, and by the providence of God Ireceivedmany students. Most of my students come from the local Protestant community; I am indeed surprised by their desire to seek the truth; also, I realized that a ‘good action’ can be done in many different ways. It can mean a volunteer at a hospital, but also teaching; since teaching the truth is another way of glorifying God.

Concerning the question about the Chinese Government and the Holy Catholic Church, I have seen many different opinions among Catholics about this. Some people have extreme positive view that the Chinese government and the Church will come to a closer acceptance of each other these days, and would mean – in this context – continuous diplomatic relations between the two countries are coming soon; however, on the side of the Chinese Catholics, we still have some questions that should be borne in mind.

I have spoken to a handful of people regarding their Catholic faith and their opinion about China and the Holy See during the lockdown. First, concerning religious life, a priest explained to me that although the local government has stopped all kinds of religious activities, he still celebrated Mass at a parishioner’s home several times. He invited friends, trustworthy people; therefore he did not have to worry about Holy Mass being reported to the local government. Thus, some people are still able to participate in the sacrament of Holy Communion. However, a Mass at home is not a common thing in China; only in a few places, Mass is celebrated this way.

Also, in order to avoid the local government’s raids, some priests were celebrating Mass at 3 or 4 in the morning on Sunday. Also, some priests set up a kind of prayer group via social media tools, enabling people to pray and read the Bible every day.

You can see that the Catholic tradition continued during the pandemic and even grew stronger at this time. Additionally, other sacraments were administered by priests to their local groups. The same happened to my other friends, they have had a similar experience regarding their Catholic life during this time and although they cannot go to Mass every Sunday they tried to follow the Papal Mass(online) every day, during Lent and Easter season and combined it with daily prayers.

Rumor had it that the Pope was planning a trip to Wuhan, China. Here, I think it is most important to consider the question in a prudent way. We may ask whether it is the perfect time for his visit. There are many issues that could cause an inconvenience between China and the Vatican before and after his visit, and if we do not consider these issues prudently, greater obstacles may arise in the relationship between the two countries in the future. Among them we must consider:

First, the cultural difference between these two countries: China has a long history; however the history of the Christian tradition in the country is relatively young. For example, many Chinese do not know the distinction between the Roman Catholic Church and the Protestant community. Therefore to make a Papal trip fruitful, the Chinese government provide sufficient preparation of the people. It would be fruitful to provide clear instructions about the history of the Catholic Church in China. Most of the Chinese people would then see the Papal visit before an informed background.

Second, speaking for Chinese Catholics, there is no doubt that we are longing to see His Holiness stepping onto Chinese soil; it would be a great encouragement for our Catholic faith since we have been under persecution for a long time. Thus, in order to have a successful and fruitful diplomatic visit, it is necessary to clarify certain confusions between the Holy Catholic Church and the Chinese government beforehand – in a prudent way.

We hope that through the power of Divine providence, good fruits will come out of a possible visit and that all things will happen according to the Lord’s will.

Theresa Li is the pen name of a young Chinese Catholic teacher in Beijing, China. She reports on the current status of Catholics amid the pandemic in her country as she is experiencing it.