“Stay quiet, marine. You will be OK. God is with us all this day.” — Father Vincent Capodanno, last words, spoken to a wounded marine on a battlefield in Vietnam 46 years ago in 1967. A few seconds later, Capodanno was shot and killed. On June 14 in Vietnam, not far from the spot where he died, a Mass was celebrated in his memory.

On June 14, something extraordinary happened in Vietnam. A Mass was celebrated by a Vietnamese bishop in memory of an American Marine chaplain, Father Vince Capodanno (photo), who was killed in Vietnam on September 4, 1967, at the age of 38. Capodanno was ordained a priest on June 14, 1958, so the Mass was celebrated in commemoration of the 55th anniversary of his ordination. And so, in a sense, the Mass, attended by Americans and Vietnamese Catholics, was a sign of peace, and perhaps also of healing, nearly a half century after the end of the Vietnam War. 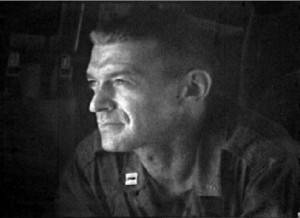 The Mass was largely the result of an effort by an old friend, Captain Edward “Ted” Bronson, a career Navy officer, now retired, who believes Capodanno was a holy man who died a holy death, administering the last rites to wounded soldiers on the battlefield, and so ought to be canonized by the Church as a saint. Here are excerpts from an email Bronson just sent to me:

All went well. As magnificent and spiritual a Mass as you could pray for. About 500 attended. The bishop sat on the side, after opening remarks re Father Vincent Capodanno. Then came the procession of 15 celebrants. A high school choir of 38 “rang out” with English hymns. I did the first reading.

A reception followed for all, a Vietnamese food feast. Among the 500 were two bus loads of Que Chau villagers from two hours south. They exude pure, intense, single-focus faith. It seems as if, were they asked to give up their faith, instead they would join the earlier “martyrs of Vietnam.” This village Mass site was 2 km from the Que Son valley battlefield where Father Capodanno died with his fellow marines on the opening day of “Operation Swift” on 4 September 1967. It was the worst casualty day for our Marines in the war, as they were outnumbered 500 to 2000.

Father Capodanno’s death occurred 15 seconds after telling a wounded marine, “Stay calm marine. Some one will be with you shortly. God is with us this day.” He then went to the side of a corpsman who cried out for help and both were machine gunned to death. Father Capodanno was a true “Grunt Padre.”

Danang Bishop Joseph Tri told us afterwards, he will make this an annual 14 June Mass for the repose of the soul of Father Capodanno. The date is the anniversary of his ordination to the Maryknolls by Cardinal Spellman 55 years ago today.

‘Twas magic, Bob, and it was all your challenge at dinner after the Mass at Santa Susanna, Rome 21 May, 2012. I started with a blank piece of paper and went from there… with a measure of help from my guardian angel and Bishop Tri. Delighted to have participated.

Thank you for your friendship and ‘till we meet again, very best.

The son of an Italian immigrant, Vincent Capodanno was the youngest of 10 children. He attended night classes at Fordham University and in 1949, confided to a close friend that he had felt a calling to the priesthood. Capodanno requested permission to join the Navy Chaplain Corps and serve the growing number of Marines arriving in Vietnam.

The Reverend Daniel Lawrence Mode, author of The Grunt Padre, described his service to the Marines this way: “Father Capodanno became a spiritual comrade by removing all distinctions and obstacles between his grunts and himself… He lived, ate, and slept as the men did… Grunts recall the Grunt Padre leaping out of a helicopter in the midst of battle, blessing the troops, serving the Eucharist to the Catholics, and then leaping into a chopper heading off to another corner of active conflict… He remained at the side of the dying, present until the end, rather than let any man die alone.”

In September 1967, the 2nd NVA Division moved into the Que Son Basin, south of Da Nang. Operation Swift began when elements of the 5th Marines were attacked in the early morning hours of September 4, southwest of Thang Binh. Father Capodanno left the relative safety of the command post and, as his Medal of Honor citation describes, “ran through an open area raked with fire, directly to the beleaguered platoon. Disregarding the intense enemy small-arms, automatic weapons, and mortar fire, he moved about the battlefield administering last rites to the dying.” Capodanno went to the side of Sergeant Lawrence Peters. He recited the Lord’s Prayer with him. After Peters died, he moved to comfort Corporal Ray Harton. He cradled the young corporal’s head and blessed the wounded Marine with his left hand, saying, “God is here with us, Marine, and help is on the way.”

As the fighting raged, Father Capodanno saw a young lance corporal giving aid to a wounded corpsman who was in danger of bleeding to death from a thigh wound. As the priest moved toward the wounded man, an enemy machine gunner set up his weapon no further than 15 meters away. Father Capodanno gathered the corpsman in his arms and used his own body to shield the wounded man from enemy fire. He was struck and killed instantly, 27 bullets piercing his body. He was posthumously awarded the Medal of Honor.