The Incident of the Birds

The Incident of the Birds

On January 26, Pope Francis, after calling for peace in Ukraine, where protestors had died, released two white doves as a sign of peace. The doves were immediately attacked and pecked by a crow and a seagull… A sign?

In this issue, we give profiles of the 19 new cardinals Pope Francis has chosen. We also cover the important six-week meeting of the Legionaries of Christ, as the order seeks to renew itself after the scandals involving its founder.

But, as we close out this first year of the papacy of Pope Francis, we cannot overlook an odd incident which occurred on January 26.

That Sunday, during his noon Angelus, the Pope issued a call for peace in Ukraine, where several anti-government protesters had just been killed. Two Ukrainian children standing by the Pope re­leased two white doves as signs of the hopes of Pope Francis, and of the world, for peace, not only in Ukraine, but also in Syria, in the Middle East, in the Far East, in families, everywhere.

But the release quickly dissolved into a vicious mid-air battle in front of the papal palace. As tens of thousands watched in horror, a large black crow chased one dove, and a seagull chased the other. The first dove lost some feathers as it broke free from the seagull. But the crow grasped the second dove in its claws and pecked it re­peatedly as it struggled to escape.

The extent of the doves’ injuries was not known, nor is it clear what happened to them later. 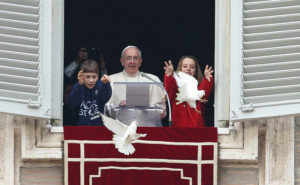 Pope Francis with the two Ukrainian children who released the doves in St. Peter’s Square. 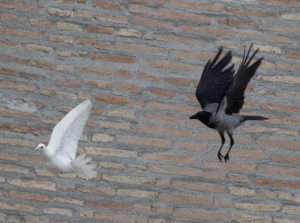 The doves were released during Pope Francis’ noon Angelus prayer.

The attack came just after Pope Francis told the crowd he hoped to spark a “constructive dialogue” sur­rounding the anti-government pro­tests in Ukraine, where the country is trying to decide whether to orient itself more toward Europe (as the protesters wish) or toward Russia (as the government prefers).

“I am close to Ukraine in prayer, in particular to those who have lost their lives in recent days and to their families,” the Pope said.

Following the dove attack, some people called the incident a “bad omen.” Others saw it as summing up the situation the Pope finds himself in: seeking peace everywhere, finding it rarely. Writing in the Washington Post, writer Max Fisher called the attacks on the doves of peace “a perfect met­aphor for Pope Francis’ first year.” He said: “What better symbol could there be for the world in 2013, its many setbacks and disappointments, and in particular for Pope Fran­cis’ well-intentioned but, so far, frequently unsuccessful attempts to improve it? This is not a slight against Francis, whose public role continues to inspire lots of people around the world. But the difficulties he’s encountered in his first year, and that his bold approach may continue to encounter, are symbolized well by Sunday’s dove disaster.”

Highly symbolic indeed. A lone voice for peace seems to invade the territory of the invested. But there’s a need for the Pope’s idealism, because we’ll never find our way to a better world without a vision of what can be. Humanity is crying for this vision right now. The answer is to join our voices with the Pope’s and the children’s, and release a thousand, a million, doves.

Editor’s note: Please consider joining one of our pilgrimages to the Holy See. We meet with Vatican officials and discuss issues facing the Church. Also, consider joining us on an Urbi et Orbi Foundation pilgrimage to Russia, Ukraine, and Rome in July (exact dates still to be set). If you would like to pray with and for Pope Francis, join us on pilgrimage. —Robert Moynihan