One Citizen of Rome Tells How the Pandemic Has Changed the Eternal City, And, Perhaps, the Church 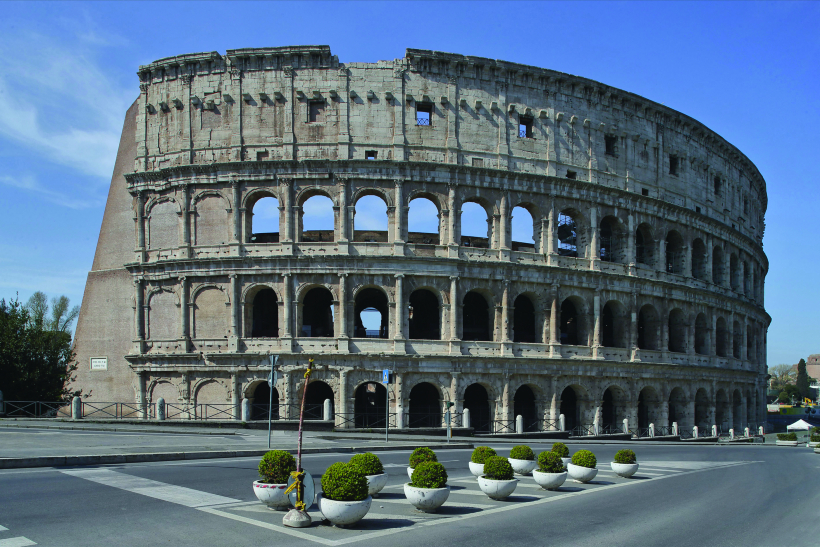 It’s something with which no one was acquainted. Or perhaps, for the elderly, it was an echo of the sad times of the Second World War. For everyone here in Italy — in Rome, in any case — an upheaval of the quiet (because predictable) swing of everyday life.

Nobody had foreseen it, except perhaps some writer of science fiction thrillers. The coronavirus has landed in our lives and forced us — along with our government — to profoundly change the way we live. For the psyche of the Romans, who at first had taken the coronavirus a little lightly (and mocked it in countless cartoons), the turning point occurred when (due to the power of images) TVs showed the rows of military trucks transporting the overflow of coffins from Bergamo to other parts of northern Italy, to cremate the bodies of elderly people cut down by the disease. At that moment, in Romans, jocularity became fear — and fear of contagion prevailed over accustomed, free behavior.

There is very little traffic on the streets now; the buses carry two or three people at most. On abandoned squares -— like in Piazza Navona — grass begins to sprout among the cobblestones for the first time. Towards St. Peter’s or the Colosseum, it is impossible not to notice the disappearance of tourist groups and students. Most of the shops have been closed for a month, and production is partially blocked. One fears that the start of the recovery (whenever it happens) will be long and tormented: the economic situation is very grave.

Around Piazza Bologna, in a bourgeois neighborhood not far from Porta Pia, you can see the queues, long, yes, because everyone is spaced at least one meter away from the other. When you go to the supermarket, you must enter one at a time. In the early morning or late afternoon, bipeds appear, walking at a brisk pace with quadrupeds on leashes, or jogging.

Most passers-by wear protective masks: some look like astronauts or Martians, others liven up their masks with decoration. With this beautiful spring, we begin to see bare shoulders and bellies again… .but sometimes only the eyes are visible in the faces!

Greetings are reduced to a “hello” suffocated by the masks, the hands covered with gloves, handshakes and hugs abolished. It is not possible to meet and chat in threes,since it is considered a “gathering” which must be dissolved.

The bags of food hung along the streets have also entered the landscape and are available to those who now experience great difficulty in regularly feeding their families. Solidarity with the needy is not lacking in any part of Italy.

From all television screens, radios and newspapers is repeated almost obsessively: “Stay at home.” And a large majority at the moment — though the first signs of restlessness are showing — still manages to follow the invitation/threat.This has created a sort of psychosis that transforms some into a sort of “guard”with the finger pointed at those who go down the street without a mask (though not mandatory), whether walking their dog, jogging, or taking a child for a walk. These “guards” especially love to scold the unfortunate. And sometimes they turn into police informers if they just glimpse three or four faithful who are wandering around the churches.

The noises and lights of the city have also changed. The cheerful and confused hubbub characteristic of Rome, the cappuccinos at the bar, the evenings at the cinema, or the theater, or the restaurants—all gone. It is true that we are spared the horns of impatient motorists and the quarrels over double-parked cars. But in their place are the sirens of ambulances and flashing lights of the police, placed to monitor compliance with the restrictive rules decreed by the government. Starting from the early closing of the shops, around seven in the evening, Rome falls into a curfew silence, unprecedented except in wartime. Here … the incredible silence of Rome.

The Italian Church and Electronic Christianity

We live as prisoners, under a sort of “house arrest” — how long, we don’t know. Many fundamental freedoms have been taken away from us: that of movement, of aggregation, of seeing our loved ones if they do not live with us, and of community expression of our faith through the rite of the Holy Mass in churches.

The government’s regulations about church attendance, many suspect, are unconstitutional, but the Italian Bishops’ Conference has suffered them passively. Public Masses have been prohibited, and, subsequently, churches closed in Trent and, for one night, in the diocese of Rome (here the Pope changed his opinion in a few hours, in the face of strong protests, and decided — through the Cardinal Vicar De Donatis — to reopen the parish churches). The interpretation of government regulations on the right to pray individually in churches is uncertain: in several places in Italy, access to the sacred places has been blocked.

Then on March 27 came a notice, bizarre to say the least (and in any case offensive to Catholics), from the Ministry of the Interior, stating that churches could remain open, but the faithful could only enter them to pray (with security measures) if the building was already on their way to the grocery store or the tobacconist’s! The right to pray in church that is worth less than buying a pack of cigarettes …

Though acquiescent to a government it considers a friend, the Italian Church has shown its own vitality through many of its parish priests, who now broadcast via the internet the Holy Masses celebrated in church — or even on parish terraces, amplified by speakers. Some priests went out on the streets alone to bless the city, even with the crucifix (and some were also fined). The Episcopal Conference organized television rosaries which attracted large audiences: for example, over four million gathered in front of the screen for the rosary from the Brescia sanctuary of the Madonna delle Grazie.

The aid given by the Italian Episcopal Conference (CEI) for the needs of families in daily struggle now to eat is substantial. Two hundred million euros (one fifth of the entire annual income of the nation’s clergymen) were donated to the dioceses; over 22 million euros had already been allocated for urgent interventions, while various charities have helped the needy with about 285 million euros.

And in the Vatican, one wonders, how are conditions? The virus knows no borders: as of this writing, there were eight infected persons (two or three of them prelates). The Pope himself eats in his apartment and celebrates the morning Mass (broadcast on TV) in the chapel of his residence without the usual faithful. The general audiences, as well as the Angelus, are broadcast, with the Pope accompanied by few people.

For those in need, the Pope has donated tens of millions. The pontifical almsgiver, Polish Cardinal Krajewski, works ceaselessly to help the poor materially and now—at the behest of Francis, perhaps inspired by the bishop of Bergamo who asked his priests to donate three months’ salary for a solidarity fund for coronavirus victims — he also has beaten cash out of his cardinal confreres and the other members of the papal household for pontifical charity.

The faith of many is shaken, as always happens in great tragedies. Why? The official Church has apparently adjusted without too much trouble to the ban on Masses coram populo and their replacement with video streaming. The faithful are invited to pray at home, to internalize one’s relationship with God (without the mediation of the Church, as represented by the priests) … all this risks having profound consequences. More than one might ask: But is it really so necessary to go to Mass, considering how this apparently did not seem a priority to the Italian Bishops’ Conference?

But “immaterial Christianity” is not Christianity, because Christianity is embodied in physical reality. When the recovery starts, will the failures of such a compliant attitude towards the “virtual” be seen? We hope not; we fear so.