Is Rome Pushing the Russian Patriarch "Into Putin’s Arms"?

Is Rome Pushing the Russian Patriarch "Into Putin’s Arms"? 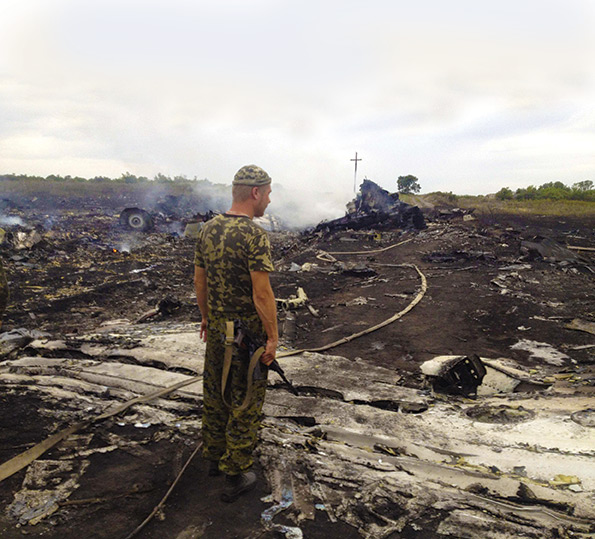 An armed pro-Russian separatist stands at the site in eastern Ukraine where a Malaysia Airlines Boeing 777 plane crashed on July 17. The precise cause of the crash was not clear in the days after it occurred (CNS photo/Maxim Zmeyev, Reuters).

A British priest who is a leading scholar in the field of ecumenism, writing in The Catholic Herald of London, has sug­gested that Rome may be missing an opportunity to work closely with the Russian Orthodox Church, and in so doing may be pushing Russian Orthodox Patriarch Kirill “into Putin’s arms.” The article was published on July 28 by Father Mark Drew, a researcher specializing is dialogue be­tween the Catholic and Orthodox Churches.

At the same time, the current global situation, with conflicts in Ukraine, in Iraq, and between Israel and Gaza, have led one Russian Orthodox prelate to worry that the word might be on the edge of another world war. Metropolitan Hilarion of Volokolamsk, head of the Moscow Patriarchate De­part­ment for External Church Relations has expressed concern over the current international situation, claiming that the world finds itself one step away from a global war.

So the future of Catholic-Orthodox relations, and of world peace, may be in the balance in Ukraine.

“The current situation is increasingly reminiscent of that in the run-up to the First World War,” Hilarion said in an article published in the weekly supplement to the Rossiyskaya Gazeta newspaper on July 31. “Yes, so far the conflicts have been on a local scale, but whole countries and whole military-political blocs are getting sucked into the militaristic rhetoric. Various countries create and maintain, through mass media, an image of the enemy. And that is one step away from a declaration of global war.” According to Hilarion, the parties to the present standoff have used the July 17 Malaysian plane crash in Ukraine for mutual accusations, “loud political statements and calls for reprisals and retribution — the same as 100 years ago when a shooting by a Serbian terrorist of the Austro-Hungarian heir to the throne led to war. It looked as if the leading global powers had been waiting for this shot to start the global slaughter.”

As fears of a wider war mount, the role of the Orthodox Churches, and of the much smaller Catholic and Protestant communities, in Ukraine may be critical.

The Moscow patriarchate, to which most of Uk­raine’s Russian Orthodox be­long, continues to position itself as a close ally of the Kremlin, Fr. Drew writes, though the Patriarch, Kirill, “has tried to put some distance at least between his Church and the more extreme positions of Russian nationalists.”

Fr. Drew argues that Kirill “knows that many mem­bers of his flock [in Ukraine] are at­tached to the sovereignty and territorial integrity of their homeland [Ukraine] and that by no means all are nostalgic for Kremlin rule. He certainly fears that many might defect to the rival Kiev patriarchate [Note: a Kiev patriarchate that has broken away from the Moscow patriarchate]. The latter group, although considered uncanonical and schismatic by most Orthodox Churches worldwide, has made significant inroads into Moscow’s flock in recent years. Any acceleration in this loss would significantly undermine Moscow’s ambition to be recognized as the de facto leader of worldwide Orthodoxy. Voices have re­cently been heard expressing the hope that the schism would soon be healed and most of Ukraine’s Or­thodox reunited under a single jurisdiction. That seems overly optimistic for now, but Kirill will be convinced that the division must at least not be exacerbated. Hence the dove-like noises he has been making, pleading for a peaceful solution at a time when the more hawkish voices are setting the agenda in Russian society as a whole. His statement on the downed plane neither points the finger nor attempts to deflect blame, confining itself to expressing sorrow and the hope for an impartial investigation.” 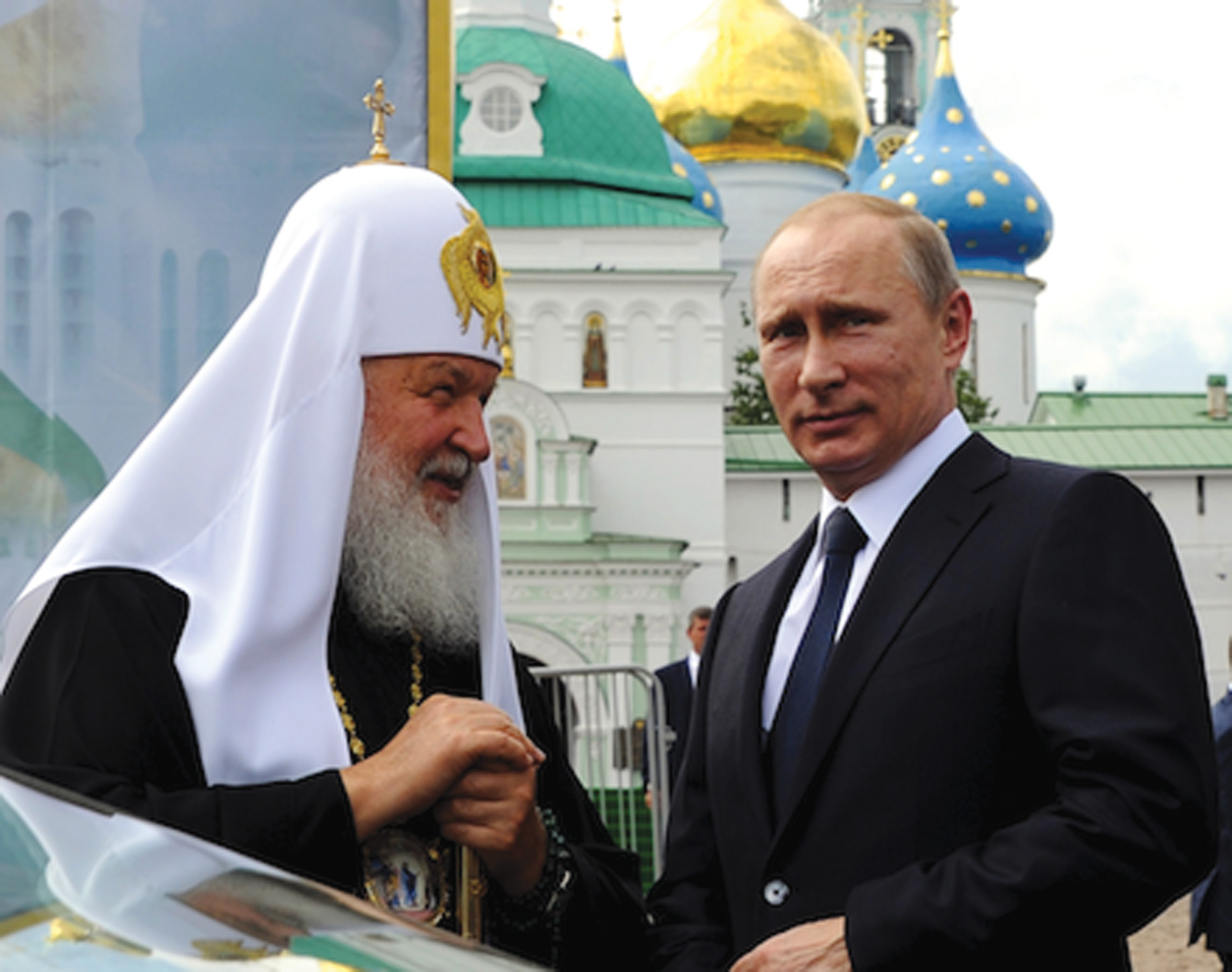 Russian Orthodox Patriarch of Moscow Kirill (left) with Russian President Vladimir Putin (right). Both were attending celebrations on July 18 near Moscow on the 700th anniversary of the death of St. Sergius of Radonezh, one of Russia’s greatest saints and considered a saint of the unity of the nation.

Whatever the talk of reunifying the splintered Orthodox majority in Ukraine, the relations between Catholics and Orthodox are tense, Fr. Drew says. In particular, the Ukrainian Greek Catholic Church, which follows the same Byzantine rite and customs as the Orthodox but is in union with Rome, is on the firing line, he says.

“The Orthodox have long seen Greek Catholics, to whom they refer by the disparaging term of ‘uniates,’ as a papal Trojan Horse, used by the Vatican to undermine Orthodoxy,” Fr. Drew writes. “Rhetoric about the evils of ‘uniatism’ has traditionally been turned up when the Orthodox have felt insecure and threatened. Last month it reached a paroxysm that was all the more distressing in that it came from a Churchman usually seen as being of a relatively irenical disposition.”

Fr. Drew was referring to the same Metropolitan Hilarion cited above. In early June, Hilarion, a re­spected theologian relatively favorable to ecumenical dialogue with western Christians, speaking in Minsk, Belarus, said that “uniatism” was and is “a special project of the Catholic Church, aiming to convert the Orthodox to Catholicism.” He accused Greek Catholics, and thus implicitly the Catholic Church as a whole, of “oppressing the Orthodox clergy in all possible ways.”

Fr. Drew writes: “Without over-dramatizing, it is worth asking why Hilarion, who must have known that his statement would endanger hard-won improvements in ecumenical relations, chose to make it anyway. We cannot exclude from the equation the effects of passions and fears which violent conflicts have on the judgment even of Christians. But I wonder if there is not a more calculated side to Hilarion’s statement. Nothing unites a body divided so much as a common enemy. Might Hilarion not have hoped that by re-awakening long-held fears of Catholic expansion he might encourage his co-religionists to abandon internecine strife, in order to concentrate their fire on the ancestral foe? Might he not conclude that, however regretful, putting the cause of ecumenism on hold might be worthwhile in order to stave off an immediate threat to the interests of his own Church?

“In any case, Hilarion might think that there is less to be gained from good relations with the Catholic Church than had been previously hoped. Relations progressed under Benedict. But both Kirill and Hilarion made it clear that they were sceptical about the prospects of doctrinal consensus, but welcomed the opportunity to construct an alliance with Catholics against secularism and the abandonment of traditional Christian moral values. Pope Francis has shown that he is much less interested in campaigning on these issues than his immediate predecessors. Some Catholics were uneasy about forging an alliance around issues widely identified with a reactionary social agenda; but the change in atmosphere summed up by Pope Francis’s famous ‘Who am I to judge?’ line may have cooled the ecumenical ardour of the Russian Orthodox hierarchy and propelled them more enthusiastically into Putin’s arms.”