The Thousands of Jews Saved in Churches and Convents

The Thousands of Jews Saved in Churches and Convents 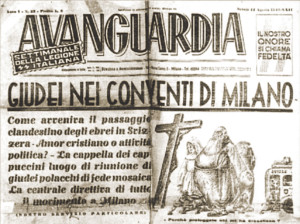 The front page of a newspaper close to the German SS during World War II denounces the protection received by Jews in Milan’s Catholic convents.

The controversy over the “silence” of Pius XII is being reignited. But the facts speak for themselves. The Catholic Church gave refuge to a great number of Jews. With a commentary by the Italian Jewish historian Anna Foa.

Fresh from a mid-January visit to Jorge Mario Bergoglio, his longtime friend and soon to be his traveling companion in Israel, the Argentine Rabbi Abraham Skorka said to the Sunday Times of London with regard to the pontificate of Pius XII: “I believe that the Pope (Pope Francis) will open the archives.”

With that, Skorka did not reveal anything new, but these few words were enough to stir up anticipation over an imminent opening of the archives concerning the papacy of Eugenio Pacelli, just before Francis’ trip to the Holy Land, scheduled for May 24-26.

During the 1960s, Paul VI had ordered the publication — very much ahead of schedule — of 12 large volumes of Vatican documents from the period of the Second World War.

But now it is expected that Pope Francis will make available the complete documentation of the pontificate of Pius XII, from 1939 to 1958, a documentation that runs to 16 million pages, more than 15,000 folders, and 2,500 files. The work of organizing this imposing mound of papers has been going on for six years at the Vatican, in order to make it practically accessible to scholars. And the prefect of the Vatican secret archive, Bishop Sergio Pagano, has told Corriere della Sera that “it will take another year or year and a half.” 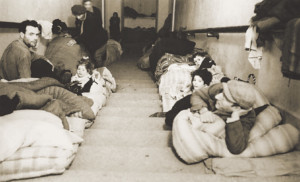 It was Benedict XVI who gave the impulse to the opening of the archives of Pius XII. But when, at the end of 2009, Benedict proclaimed the heroic virtues of that Pope (Pope Pius XII) — the first step on the road to canonization — the controversy over Pius’ presumed silence during the Shoah made a blistering return.

Yad Vashem in Jerusalem, the memorial museum, judged it “deplorable” that the virtues of Pius should be recognized before the publication of all the documents.

This was the period of the “impatience” of the archbishop of Buenos Aires at the time, Bergoglio — in conversations with Rabbi Skorka that were later collected in a book — about the opening of the archives concerning Pius XII, for the sake of “understanding if this is a matter of an error of vision or what really happened,” because “if we have made a mistake about something we have to say: ‘We were wrong about this.’ We must not be afraid to do so.”

In the meantime, however, the studies of the pontificate of Pius XII and the Jews have made significant steps forward in another direction, less ideological and more concrete: reconstructing what happened to the thousands of Jews whose lives were saved when they found refuge in churches and convents of Rome and Italy.

The research in this regard is highly advanced. And from this it is becoming ever more clear that the saving of many Jews was not only permitted but also coordinated by the highest leadership of the Church.

“This erases the image proposed in the 1960s of a Pope Pius XII indifferent to the fate of Jews or even an accomplice of the Nazis,” a leading Italian Jewish historian, Anna Foa, stated a few days ago.

Not only that. This research sheds light on a solidarity of life established in that period between priests and sisters and the Jews hidden on their property, which was a foreshadowing of the dialogue between the Church and Judaism begun decades later.

Anna Foa described this reality at a conference held in Florence on January 19 and 20. What follows is almost the complete text of her presentation, published in L’Osservatore Romano of January 20-21.

Anna Foa is a regular contributor to the newspaper of the Holy See. She teaches modern history at the University of Rome La Sapienza.