News From the East

News From the East 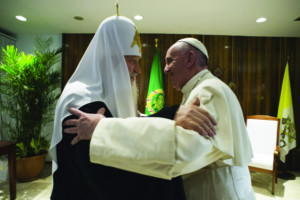 On February 12, a conference took place on “Saints – A Sign and Seed of Unity” at the Pontifical University of Saint Thomas Aquinas in Rome, devoted to the fourth anniversary of the meeting between Pope Francis of Rome and Patriarch Kirill of Moscow and All Russia.

The event was presided over by Cardinal Kurt Koch, president of the Pontifical Council for Promoting Christian Unity, and Metropolitan Hilarion of Volokolamsk, head of the Moscow Patriarchate Department for External Church Relations (DECR).

Cardinal Kurt Koch welcomed the gathering on behalf of Pope Francis, pointing to the relevance of conferences held annually at the anniversary of the Havana meeting to discuss subjects concerning the most important points of the Declaration signed by the Primates of the Roman Catholic Church and the Russian Orthodox Church. Thus in 2017, there was a discussion at the University of Fribourg in Switzerland on the general importance of the Havana meeting. In 2018, there was a discussion in Vienna on the situation of Christians in the Middle East, and in 2019 in Moscow on “Death and Dying in a Technological Society: Between Bio-medicine and Spirituality.” Cardinal Koch pointed to the relevance of the subject chosen for this year and stressed that the phenomenon of holiness and the example of saints is the foundation for building Church unity.

Then Metropolitan Hilarion greeted the participants and guests of the conference. In his address, he emphasized, “The first meeting of the Primates of the Roman Catholic Church and the Russian Orthodox Church to be held in history defined the prospect for developing bilateral relations for many years ahead. Due to the fundamental significance of the Havana meeting, it was agreed to mark this event annually by a joint conference on one of the pressing topics mentioned in the Joint Declaration which was signed to sum up the negotiations between the Pope and the Patriarch.”

His Eminence recalled the history of such conferences and said, “This year, our meeting is held in Rome, a city in which the relics of the holy first hierarchal apostles Peter and Paul and of many other apostles, martyrs and people of God rest, where great Christian shrines abide attracting thousands of pilgrims from all over the world. The place of the conference has defined its theme: ‘Saints – Sign and Seed of Unity.’ The theme of holiness and saints occupies an important place in the Joint Declaration of Pope Francis and Patriarch Kirill.”

“Significant is also the reference made in the Joint Declaration to the rebirth of Christianity in Russia and other Eastern European countries,” His Eminence continued. “In the terrible years of theomachy, thousands of Orthodox people followed Christ’s path to the Cross, and in our days they are ranked among the saints as new martyrs and confessors of the Russian Church. At the same time, the faithful of other Churches also took the path of suffering, in particular those of the Roman Catholic Church.”

Metropolitan Hilarion reminded the conference that in May-July 2017, an unprecedented event happened in the life of the two Churches — the bringing in of a part of the relics of St. Nicholas the Wonderworker to Moscow and St. Petersburg from Bari. “The relics of the man of God brought from Myra in Lycia to Bari in 1087 have never left the basilica, in which they rest, in the past 930 years. Thanks to the agreement reached between the Pope and the Patriarch, it became possible to bring a part of the relics of St. Nicholas to Russia,” he stressed.

After the conference, Metropolitan Hilarion’s film St. Peter was premiered with Italian translation at the university’s assembly hall. (mospat.ru)

Montenegro’s Prime Minister Dusko Markovic has formed a negotiating team and invited the Serbian and Orthodox Church to launch talks on Montenegro’s controversial Church law, the government said in a statement on March 5.

At the end of December the parliament in Podgorica adopted the Church law that, according to its critics, may strip the Serbian Orthodox Church of hundreds of religious sites in Montenegro, including medieval monasteries and churches.

Following the law’s adoption, tensions have escalated in Serbia and Montenegro and in mid-February Markovic met the Serbian Orthodox Church’s top bishop in the country, Metropolitan Amfilohije, to discuss disagreements.

After Amfilohije submitted a list of proposed amendments to the law to Markovic, they agreed to a comprehensive review of the law.

Montenegro seceded peacefully from its loose union with Serbia in 2006 following a referendum. Two-thirds of its population of around 620,000 is Orthodox Christian and the main church is the Serbian Orthodox Church.

A separate Montenegrin Orthodox Church was set up in 1993 but has not been recognized by other Orthodox Christian communities to date. The local branch of the Serbian Orthodox Church controls most holy sites, some of which are popular among tourists and bring in significant revenue. (IntelliNews)

Orthodoxy: a Call for Dialogue on the Ukrainian Crisis

A summit of Orthodox primates, including the Patriarch of Moscow, has failed to make significant progress in resolving the Ukrainian crisis.

The February 26 gathering in Amman, Jordan was called by the Patriarch of Jerusalem, Theophilus III. 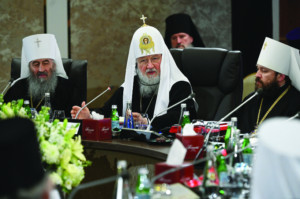 His Holiness Patriarch Kirill takes part in the meeting of Primates and delegates of Local Orthodox Churches in Amman, February 26, 2020

But, as expected, it turned out to be nothing more than a “fraternal meeting,” illustrating the impasse in which the Orthodox world finds itself today after the Ecumenical Patriarchate of Constantinople officially recognized the independent Orthodox Church in Ukraine. In the end, only three primates responded to Theophilus’ invitation: Patriarch Kirill of Moscow, Patriarch Irenaeus of the Serbian Orthodox Church and Metropolitan Rostislav of the Orthodox Church of the Czech Lands and Slovakia.

The Orthodox Churches of Poland and Romania were represented by a delegation.

The Ecumenical Patriarch Bartholomew I refused to attend the gathering, which prompted the primates of Alexandria, Greece, Cyprus, Albania, Georgia, Bulgaria and Antioch to also boycott the meeting.

“The purpose of the gathering was to renew dialogue and promote unity between brothers within the Orthodox Communion,” said a February 26 press release issued by the Jerusalem Patriarchate.

It said the meeting was held “with the primary view of unity and reconciliation within Holy Orthodoxy” in light of “the imminent danger of schism within our Orthodox Communion.” (La Croix)

Only 10% of Russians Intend to Keep Lenten Fast, According to New Survey

One out of every 10 Russians intends to observe the Lenten fast this year, according to the results of a new survey conducted by the All-Russian Center for Public Opinion Research.

The absolute majority of Russians—94%—have heard about Lent, though only 30% know that it begins after Maslenitsa (Cheesefare).

10% of respondents in the survey said they will certainly be keeping the Lenten fast, up from only 2% who strove to keep the entire fast in 2017, while 69% said they would not, and 20% were undecided.

More than half of the respondents (55%) have heard something about Lent and generally know about the rules and restrictions associated with it, while 43% do not.

The survey was conducted on February 21 with the participation of 1,600 Russians aged 18 and over. (OrthoChristian)

A row has erupted between doctors and the influential Church of Greece over whether to restrict Holy Communion in churches amid a rising number of coronavirus cases.

The federation of hospital doctors this week stressed that no exception “for religious, sacramental or metaphysical reasons” should be made to state health warnings to please the Church.

Most of the cases come from a single group of Holy Land pilgrims that traveled to Israel and Egypt last month.

But in the run-up to Orthodox Easter in April that traditionally sees a high turnout of faithful, the Church is holding its ground.

“Whoever believes that Holy Communion is life has nothing to fear, it’s a matter of faith,” Bishop Chrysostomos of Patras told Open TV. “Across the centuries, there is no case of sickness spreading through Holy Communion.”

In a statement this week, the governing Holy Synod of the Orthodox Church of Greece encouraged sick worshippers to “temporarily stay away from mass gatherings and avoid kisses and embraces.”

It also urged the faithful “to intensify prayer to Jesus Christ.”

In Romania, the Orthodox Church has allowed worshippers to bring their own spoon to Communion and to kiss icons in their own homes. (Straits Times) 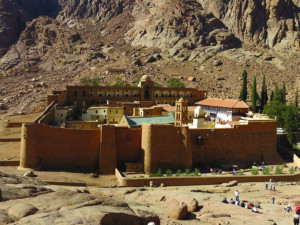 The ancient St. Catherine’s Monastery at the foot of Mt. Sinai, Egypt

The ancient St. Catherine’s Monastery at the foot of Mt. Sinai is home to one of the world’s most famous icon collections, and its icon of Christ Pantocrator is perhaps the single most recognizable Orthodox icon in the world.

Now that icon of Christ, along with more than 1,000 other sacred images, has been made available online by Princeton University, reports Aleteia.

Many of the treasures archived at the Icons of Sinai project of the Princeton University Department of Art and Archaeology pre-date the 8th and 9th-century periods of Iconoclasm when many ancient icons were destroyed.

Of all the Byzantine icons that survive in the world, over half of them are at Saint Catherine’s Monastery. This is due to the dry and stable climate, to the uninterrupted history of the monastery over the course of 17 centuries, and to the vigilant care and devotion of the monks of Sinai. The most notable are panel icons from the 6th and 7th centuries executed in the encaustic technique, where wax is used as the medium for the pigments.

The pre-iconoclastic icons at Sinai survived because Sinai was already at that time under the rule of the Muslims, and thus out of reach of the Iconoclast Emperors. Some scholars have speculated that icons were sent to Sinai for their safekeeping during this period.

In the late 1950s, the monks of St. Catherine’s began to clean and restore their collection, and a team of professors from Princeton University, the University of Michigan, and the University of Alexandria began to make trips to the ancient monastery to photograph the icons.

The website currently presents 1,294 icons, with the addition of new images ongoing. (OrthoChristian)