Sunday of Orthodoxy at the Ecumenical Patriarchate 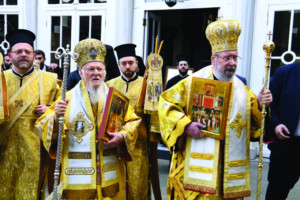 In his address, the Ecumenical Patriarch Bartholomew welcomed at the Center of Orthodoxy the Primate of the Church of Cyprus, Archbishop Chrysostomos.

“Any opposition to the matter of the autocephaly of the Orthodox Church of Ukraine is not canonical. However, there are some who intend to harm the newly established Orthodox Church of Ukraine with the aim of creating a secular institution, which, on the one hand, will be operating in contrast with ecclesial principles and tradition and, on the other hand, will be serving foreign interests in clear contradiction to Orthodox ecclesiology and the synodical character of the Orthodox Church,” Ecumenical Patriarch Bartholomew said in his speech at the end of the Divine Liturgy.

After a year of forced stay abroad after his passport and citizenship were revoked by the previous Poroshenko administration, Bishop Gideon of Makarov, who is also abbot of the historic Tithes Monastery in Kiev, has returned home to Ukraine, Bishop Viktor of Baryshevka reported on his Telegram Channel on March 8.

Bishop Gideon was unexpectedly detained in Kiev in February of last year upon returning from America, where he had spoken with Congressmen about his view of persecution the Ukrainian Church was facing under Poroshenko. The bishop was deported, his passport was confiscated, and his citizenship was canceled.

He also holds American citizenship and ended up spending several months in California. He later filed a lawsuit against the Migration Service in the Volyn Oblast, demanding that the decision to cancel his citizenship be overturned and declared illegal.

The District Administrative Court of Kiev began proceedings in the case on April 23, and on September 19, the court ruled in Bishop Gideon’s favor, deciding not only to return his citizenship, but also to reimburse him for his court fees.

Despite the Administrative Court’s September decision, the matter continued in the Appeals Court, which ordered the State Migration Service of Ukraine in the Volyn Province to return Bishop Gideon’s citizenship on January 22. (OrthoChristian)

Mt. Athos to Hold Vigils and Processions for Coronavirus

While the Holy Mountain Athos has closed its port to pilgrims until the end of March, the monastics continue to uphold the faithful through their prayers.

In this vein, the Sacred Community of Mount Athos, the governing body for the 20 ruling monasteries and their associated sketes and cells, has called on all the monasteries to hold All-Night Vigils to the Mother of God and to hold cross processions, entreating God’s mercy and grace as the world continues to suffer from the coronavirus epidemic, reports the Greek Orthodoxia News Agency.

At its March 19 session, the Sacred Community, consisting of one representative from each of the 20 ruling monasteries, decided to announce to each of the monasteries its decisions regarding the fight against the spread of the virus through active prayers, processions, and vigils.

“The representatives and abbots of the 20 monasteries of Mt. Athosthus express their love for suffering mankind, for whom they pray with agony to the Most Holy Virgin, entreating her protection in such a difficult time,” the Orthodoxia report reads. In conclusion, the Sacred Community expresses the need to strengthen prayers and the celebration of the sacraments during Great Lent and calls on all to repent “with all the power of the spirit of the Lord, the Lifegiving Source overcoming death.” (OrthoChristian)

Metropolitan Seraphim of Kythira of the Greek Orthodox Church was arrested on March 20 for defying the government’s order and continuing to celebrate the Divine services.

The Holy Synod of the Greek Church earlier announced that it would reduce its parishes’ schedules to just one-hour Liturgies on Sunday, though the state then overruled the hierarchs and ordered that all services be canceled until March 30 in an effort to contain the coronavirus.

The Metropolitan was arrested after celebrating the Divine Liturgy in the Holy Cross Cathedral in defiance of the state’s order. The doors of the cathedral were open and the bells were rung, calling the faithful to worship. Met. Seraphim’s decision to serve angered Mayor Stratos Harhalakis, who stated that “no one can be above the law.”

The Greek hierarch was taken to the police station and a case was opened against him. He was later released by the order of the Prosecutor General after it was explained to him that next time he would have to appear before a special court for considering the cases of those detained at the scene of a crime.

“Taking into account the unjustified, unfair, and artificial hype that arose both in the media and online at the expense of the clergy of our Metropolis, and mainly our bishop, with deep regret we inform the residents of Kythira that from today all services in our churches are discontinued,” the statement reads.

The statement also specifies that this is in stark contrast to the centuries-old tradition of the Orthodox Church. The Divine Liturgy will be served with the doors open, but only with the priest present. (OrthoChristian) 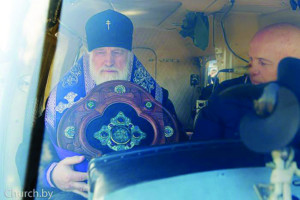 Minsk, March 23, 2020. His Eminence Metropolitan Pavel of Minsk and Zaslavl took to the skies to bless the capital of Belarus

While pious priests in Georgia, Ukraine, and elsewhere have begun blessing their churches and surrounding streets in processions throughout their cities, Metropolitan Pavel of Minsk and Zaslavl took to the skies to bless the capital of Belarus.

March 22, Metropolitan Pavel held a “moleben [prayer service] in times of devastating plague” and the Small Blessing of Waters at the Church of All Saints in Minsk, together with parish clergy. The service was held at the request of the faithful, reports the site of the Belarusian Orthodox Church.

The moleben was celebrated before the parish’s Cross-reliquary, in which is embedded a particle of the Lifegiving Tree of the Cross and the relics of several saints, and a venerated copy of the Reigning Icon of the Mother of God.

Metropolitan Pavel offered the faithful a word of edification on the Sunday of the Cross, stressing the theological significance and life-giving power of the veneration of the Cross of the Lord.

Thanks to the sufferings of Christ, the Cross became a symbol of the victory of life over death, he said. While the ongoing coronavirus epidemic has plunged many into confusion and even despair, true believers are called upon not to give in to fears, but to place their trust in God and behave responsibly towards their neighbors, the Belarusian primate said. (OrthoChristian)

Iconic Wooden Church of Russian North to Reopen After 30 Years 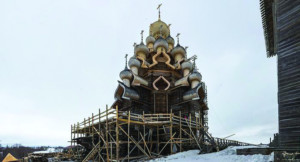 Holy Transfiguration Church on Kizhi Island in the Republic of Karelia, also recognized as a UNESCO World Heritage site

The large-scale restoration of one of the most iconic of the famed wooden churches of the Russian north, with 22 domes, has been completed, and the church is slated to open for the first time in 30 years this summer.

Holy Transfiguration Church on Kizhi Island in the Republic of Karelia, part of the Kizhi State Open-Air Museum of History, Architecture, and Ethnography, is also recognized as a UNESCO World Heritage site.

The church is currently scheduled to reopen on June 1, and museum representatives hope the church will be consecrated on its feast, August 19, by Patriarch Kirill, with Russian President Vladimir Putin possibly in attendance. (OrthoChristian)