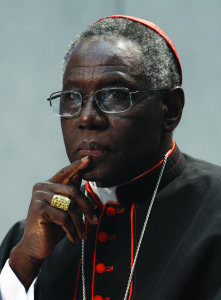 Cardinal Robert Sarah – This high-ranking African cardinal has burst onto the ecclesial scene with a powerful book. He is now being seen by many as the conscience of the Church

In the 2015 Synod on the Family, like its predecessor in 2014, the prelates from Africa emerged as a formidable force upholding Church Tradition, in doctrine and in practice.

And among those prelates, Guinean, 70, Prefect for the Congregation of Divine Worship and the Discipline of the Sacraments, has been a particularly outspoken crusader for the traditional dignity of the Mass, for the natural family, and for a bold faith in the midst of secularism. 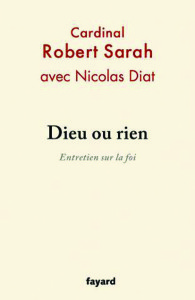 The original cover of the cardinal’s book in French. The book is now available in English from Ignatius Press

Cardinal Sarah, one of the authors of the pre-Synod book defending tradition called Eleven Cardinals Speak, also speaks in a book-length interview with French journalist Nicolas Diat, called God or Nothing, released in 2015. The topics he discusses are encapsulated in one quote from the book: “The question is ultimately very simple: is it the world that must change its attitude, or the Church its fidelity to God?”

In his forceful intervention at the October Synod, Cardinal Sarah called gender ideology and Islamic militancy “two apocalyptic beasts,” saying they are both “violently intolerant, destroyers of families, society and the Church, and are openly Christophobic.”

Armin Schwibach, professor of philosophy at the Pontifical Athenaeum Regina Apostolorum in Rome, conducted a wide-ranging interview with the cardinal in late 2015. Some of the interview is excerpted here:

What new forms of catechesis would be necessary so that the liturgy would become once again the true source of the Church’s life?

The liturgy is in itself the source and summit of the Christian life and this above and beyond any catechesis. Of course, however, a liturgical formation which has as its purpose the deepest comprehension of the sacraments is urgent. It is vital and urgent for man to reconnect personal and interior relationships with God through a true and intense liturgical and sacramental life… We were created to love, pray and adore God. When man kneels down before God he reaches the highest level of existence…

The recent events and the terrorist attacks in Paris… Do you see in this also a spiritual danger for our European society, for its community of values?

Europe is in danger because it has forgotten God, and, as a result its culture, its history, its roots, its identity. The phenomenon of Islamic terrorism might even be temporary, we all hope, but the problem of the West which does not know itself anymore will remain even afterwards… The jihadists have hit precisely the places which we hold to be the expression of today’s “life”: liberty, which often flows into anarchy; fun; lightheartedness. Now I ask myself: is the West only this?… And it is this which the degeneration of a part of Islam, which is made tangible in a false way in the terroristic spirit, strikes: these terrorists find a soft underbelly to strike, in which the absence of God and of identity has made us weak and defenseless… 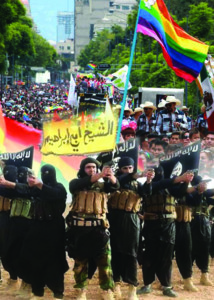 What, in your opinion, is the greatest weakness of Christians in Europe, in that part of the world which was once “the Christian West”?

The greatest weakness, which I would call mortal sin, of Europe is the silent apostasy of which St. John Paul II spoke. Or indeed the will to construct a “humanism without God.” Europe and the society of the West in general have distanced themselves from God… “whether there is [a God] or not, does not matter: everyone is free to believe whatever they want, but only in private”… insofar as everything is equal, nothing counts anymore. But this relativism is much worse than nihilism. Pope Benedict has always said that “only where God is seen, does life truly begin, only when we meet in Christ the living God, do we know what life is.”

Is not the talk of “opening a door” [to reception of the sacraments by the uncanonically married] equivalent to an always denied “change” of the doctrine of the indissolubility of marriage?

The Synod wanted to aid and accompany these baptized who find themselves in a situation of life contrary to the words of Jesus. And has proclaimed that the door for them is always open, inasmuch as God continues to call to conversion and to act in their hearts to regenerate their desire for the full life which Jesus has proclaimed to us.

Certainly, to propose those roads which do not lead to this full life is not opening doors… To admit a person to Eucharistic communion when he lives in manifest contradiction with the words of Jesus signifies opening a door which does not lead to Christ, or actually to close the true door of life.