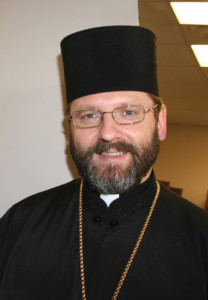 Sviatoslav Shevchuk, 43, was born in 1970 in Ukraine, then under Communist rule and part of the Soviet Union. Still, despite the policy of state atheism, he received and maintained his Christian faith. Now he has become the leader of the Ukrainian Greek Catholic Church, the largest Eastern-rite Church in union with Rome. For his energy and passion in defending the Church in Ukraine, especially during this difficult year for that country, we honor him as one of the “Top Ten” people of 2013.

Shevchuk is also a Church leader who raises his voice in defense of civil liberties, especially the freedom of expression in light of the recent events in Kiev. He knows Pope Francis very well as he spent several years in Buenos Aires, shepherding the Ukrainian community in Argentina. Shevchuk considers Pope Francis his mentor in the episcopate, because his first assignment as a Ukrainian Catholic bishop was in Argentina, so “this whole dimension of poverty, simplicity, evangelical counsels, is something that will provide another inburst of the Holy Spirit for the Catholic Church worldwide,” he said.

In November, Shevchuk had a long stay in Rome because he participated in the plenary session of the Congregation for the Oriental Churches. His stay fell during the same period when Russian President Vladimir Putin was received by Pope Francis at the Vatican on November 25. Commenting on this visit, Shevchuk said: “The meeting of the Pope with President Putin is truly very significant, not only for the opening of the hearts and minds of the Orthodox to the Catholic Western world but also because it contributes to mutual cooperation for a Christian Europe. Not only does the Russian Orthodox Church support Christian values, especially in the field of the family and marriage, but, together with the Holy Father, it is collaborating for peace in Syria. This is a very important fact because in Syria there are Catholics as well as Orthodox. It is a very encouraging step, therefore, and we hope there will be a follow-up in the future.”

Regarding recent attacks by police against peaceful protesters in Kiev, the Permanent Synod of the Ukrainian Greek-Catholic Church strongly denounced the police action. The statement, signed by Shevchuk and the members of the permanent synod, condemned “the action directed towards restricting civil liberties, especially the freedom of expression and peaceful civic manifestation of the citizens of Ukraine.” They declared their “support and solidarity with all those on Maydan Square who are standing with dignity and witnessing to the dignity of their fellow citizens and of the whole nation.“ They strongly supported “the peaceful character of this civic gathering and declare our rejection of any type of violence.”

In 2012, Shevchuk, at age 42, was the youngest Synod Father at the Synod on the New Evangelization at the Vatican. Talking of the Synod to Vatican Radio, he highlighted the concept of spiritual paternity and maternity as key elements to the New Evangelization. Our faith can only be transmitted “in the context of interpersonal dialogue, so, we need somebody who can generate us in the faith of the Church,” he said. He called these persons “spiritual father [and] mother.” The role of the family he considers as one that “fosters a sense of faith.”

“I received my Christian faith [during the time of the persecutions under Communism] in my family,” he said. “Actually, in the former Soviet Union, Christian families were true Ecclesiae domesticae [domestic Churches], where a priest could come and celebrate sacraments, where I learned a basic notion of Christian faith from my grandmother, and even in those circumstances, I learned how to pray, how to worship, how to live my life according to Christian moral principles.”

The Ukrainian Catholics have a long-standing request that their leader be recognized as a patriarch by the Pope, but there might be negative political effects of such a move in Ukraine and in Russia. Addressing this question, Shevchuk once said: “We are conscious that the decision about the patriarchate belongs to the Holy Father and we would never press him. We respect his freedom.”

Shevchuk began his religious education in 1991-1992 at the Don Bosco theological seminary in Buenos Aires. He continued his education from 1992 to 1994 in the Lviv Theological Seminary. He was ordained as a priest in 1994. He studied at the Pontifical University of St. Thomas Aquinas Angelicum in Rome, Italy, where in 2006 he obtained a doctorate in theology. In 2009, he was appointed auxiliary bishop of the Eparchy of Santa María del Patrocinio en Buenos Aires and consecrated bishop the same year.

From that period, Shevchuk knows Pope Francis well since Cardinal Bergoglio was archbishop of the principal Argentinian diocese.

In 2011, he was elected Major Archbishop of the Ukrainian Greek-Catholic Church to replace the retired Lubomyr Husar.