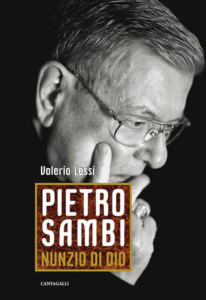 “‘I have come to cast fire upon the earth.’ These words of Jesus reported in Chapter 12, verse 49 of the Gospel of St. Luke, sum up the priestly and episcopal ministry of Pietro Sambi (1938-2011), first in his diocese of Rimini and then in various countries of the world in service to the Holy See.” This is what Cardinal Deacon Angelo Sodano wished to emphasize in his presentation of Valerio Lessi’s new book Pietro Sambi: God’s Nuncio [Nunzio di Dio] (Siena, Cantagalli, 2013, 234 pages), which took place at the headquarters of Vatican Radio on Thursday, January 16, 2014. The John Paul II Foundation for the Social Doctrine of the Church contributed to the project in collaboration with the diocese of San Marino-Montefeltro, where Bishop Luigi Negri — who chaired the presentation — served as bishop from 2005 until 2012.

Cardinal Sodano, who headed the Vatican Secretariat of State from 1990 to 2006, recalled: “I always had a fraternal relationship with Archbishop Sambi, from the time I met him as Apostolic Nuncio in Burundi” where “with great apostolic fervor he carried out the mission that John Paul II had entrusted to him.” Having come “to a country torn apart by years of war,” Sambi “sought bravely to bring the two rival ethnic groups into an honest collaboration. It was exhausting work that even cost the life of his successor, the Apostolic Nuncio Michael Courtney, who was brutally murdered in 2003.” 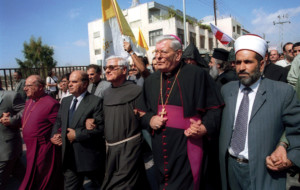 The sheik of Jerusalem (on the right) holds hands with Msgr. Pietro Sambi, papal nuncio to Israel, during a march for peace into Betlehem on October 23, 2001.

The Cardinal Deacon then recalled Archbishop Sambi’s next assignment in Indonesia, a country with 240 million inhabitants and a minority Catholic community. Despite this fact, “he did not become discouraged and began immediately to work together with the pastors and faithful towards a more forceful proclamation of the Christian message, even in the most remote islands of the vast archipelago.”

Even “more delicate was the mission which the same Pope entrusted to his papal representative in Jesus’ homeland, but the difficulties he encountered were many.” And yet, “he did not back away in the face of numerous obstacles” and “with patient work, he followed the method of confidence in dialogue.” 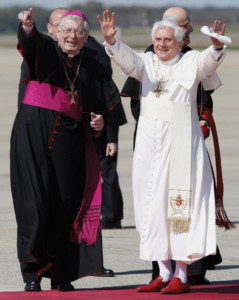 Pope Benedict XVI waves beside Archbishop Pietro Sambi, apostolic nuncio to the United States, after arriving at Andrews Air Force Base outside Washington on April 15, 2008.

Finally, in December 2005, he was sent by Benedict XVI to the United States of America, where “with great generosity, he addressed the new challenges existing in that country,” and welcomed Pope Benedict during his pastoral visit to Washington D.C. and New York in April 2008.

Archbishop Sambi died at the age of 73, on July 27, 2011, after 26 years of fruitful apostolate as a nuncio, preceded by an additional 16 years in the junior staff of papal representatives. He was, Cardinal Sodano said, “a great pastor of the Church and a great missionary of the Gospel” and “he remains one of the typical figures of the nuncio that Italy has offered to the Apostolic See.”

Last, the cardinal wished to add a personal observation that he gained in his “63 years of service to the Holy See, in different places, in different nations, and then next to the Popes: someone once said that the nuncios in the various nations are like the eyes of the Pope. I have always seen them primarily as the heart of the Pope, as the heart of the shepherd of the Universal Church, who desires to be close to the Christian communities scattered throughout the world.” (L’Osservatore Romano, 18 January 2014)