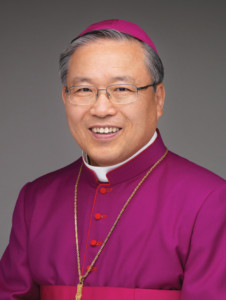 In choosing Andrew Yeom Soo-jung, the archbishop of Seoul, to be a cardinal, Pope Francis may be thinking of finding an evangelist for all of Asia — including China. This Korean Church leader is a media expert and a powerful preacher.

Yeom Soo-jung was born in Ansong, Gyeonggi Province, in 1943 to a devout Catholic family, as the third of six children.

Two of his ancestors were arrested and executed in 1850 for their Catholic faith. The Yeom family has kept their religious belief for generations through persecution, leading Archbishop Yeom, a fifth generation Catholic, to enter the priesthood.

He graduated from the Catholic University of Korea in 1970 before being ordained a priest in 1973 for the diocese of Seoul.

Called to be General Secretary of the diocesan curia of Seoul, he continued to coordinate the pastoral life of many parishes. He also encouraged the Church’s presence in the mass media, which led to the foundation of the Peace Broadcasting Corporation in 1990, which has provided Catholic voices to all of Korea on behalf of peace, reconciliation and the defense of life.

In 2001, Pope John Paul II named him auxiliary bishop of Seoul, and in 2012 Benedict XVI appointed him metropolitan archbishop. Catholics account for 10.3% of the total population in Korea; the archdiocese of Seoul is the most populous with 27% of the total Catholics. The country is home to Asia’s third largest Catholic community after the Philippines and Vietnam, and it is a fertile ground for priestly vocations and sends missionaries around the world. With 400 seminarians, Seoul plays an important role for the future of the Church in Asia.) The archbishop of Seoul also serves as Apostolic Administrator for the diocese of Pyongyang in North Korea.

In his ministry, he has highlighted the precious faith of martyrs as an example of authentic witness for all Christians.

“Through God’s call, I will pray and give my full support to the evangelization of the Church in Asia, in particular China and North Korea,” he said after learning of his appointment. He said he would try to bring “forgiveness, harmony and peaceful co-existence” to the Korean peninsula.

After his appointment, he made his first pastoral visit to Eun-pyong Village, a homeless shelter run by Seoul Caritas. He said: “You have probably wondered many times: Why does God let me suffer? But the truth is that God has loved you from the very beginning. And I want all of you to remember that you are always being loved. Heaven is not in another place or period; it exists in places where people love and share.” His episcopal motto is: “Amen. Come, Lord Jesus!”