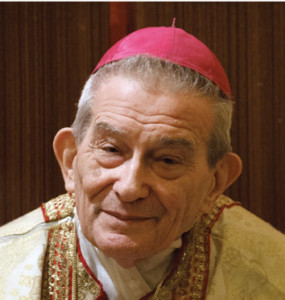 Of all the men recently appointed to become Cardinals by Pope Francis, none has waited longer — nor been more deserving — than Archbishop Loris Capo­villa. Best known as the private secretary of Blessed John XXIII (Pope from 1958-1963), Capovilla, at 98, is the Church’s oldest archbishop, and will be the oldest cardinal ever appointed by a Pope.

Capovilla’s life has been a model of faith and consistency.

Born in Pontelongo, Italy on October 14, 1915, he was ordained a priest on May 23, 1940, in the Archdiocese of Venice. It was there that Capovilla reunited with Cardinal Angelo Giuseppe Roncalli — the future Pope John XXIII (whom Capovilla first met in 1935) — after Pius XII had appointed Roncalli the Patriarch of Venice. During that time, Capovilla worked closely with the future pontiff and eventually became his lead assistant. After Pius XII died and Cardinal Roncalli was elected as John XXIII, he brought Capovilla to Rome, and later made him his literary executor.

As a gifted writer — he edited a diocesan weekly for years — Capovilla has been involved with dozens of books covering Blessed Pope John’s pontificate, and assiduously organized and promoted John’s most important writings, including his  Journal of a Soul. No one knows the heart and mind of this Pope better, and all major biographers have relied on Capovilla’s insights to write intelligently about “Good Pope John.”

But it would be a mistake to limit Capovilla’s life to his well-known association with John XXIII. His service to the Church has been much broader than that. Capovilla has just as strongly supported every other pontiff. He deplores the tendency to pit one Pope against another. He sees all the modern pontiffs as working in unison, under the guidance of the Holy Spirit, each adding his own special gifts to the many dimensions of the Church.

He is a strong believer in the continuity of Catholic tradition, and in fact has described John XXIII and Vatican II as essentially “conservative” in nature — deepening and strengthening the Church’s teachings, and in no way “breaking free” from them. Like Blessed John Henry Newman, Capo­villa  believes in the development of Cath­olic doctrine, provided it is legitimate and authentically rooted in the Sacred Deposit of Faith. He rejects, as indeed all orthodox Catholics must, “new revelation,” and ideas or innovations which weaken or contradict the Gospel’s core message. At the same time, he believes — following John’s stirring call to the Church — that Catholics need to be open to features of the contemporary world, provided they are consistent with Catholic orthodoxy.

Cardinal-elect Capovilla has always been a “loyal son of the Church,” to quote Pope Francis’ description of his own faith. Following Blessed John’s death, Pope Paul VI appointed Capovilla bishop of the Archdiocese of Chieti-Vasto in 1967, then prelate to the Loreto Prelature and Titular Archbishop of Mesembria.

Even now, in semi-retirement, as he approaches 100, he remains remarkably active, continuing to write and speak in defense of the Church, bearing true Christian witness.

Francis’ decision to elevate Archbishop Capovilla to the College of Cardinals is a reflection of the high esteem Rome has for him, and an acknowledgement of John XXIII’s inspiring pontificate. Last year, shortly after his election, Pope Francis personally called Archbishop Capovilla to thank him for his loyalty and tremendous contributions to the Church. A short time later, Capovilla learned, as did we all, that his mentor, John XXIII, would be canonized, along with Blessed John Paul II, this April 27th, on Divine Mercy Sunday.

For his part, the humble archbishop, following his elevation to the College of Cardinals, said the honor was “a ray of light over the sunset of my life.”  But, as with so many of his other accomplishments, Capovilla made it a point to share the moment with others. As Vatican Radio commented: “Monsignor Capovilla believes that by granting him the Cardinal’s hat, by the same token the Pope recognizes the silent service of a lifetime to the Church of other priests like him.”