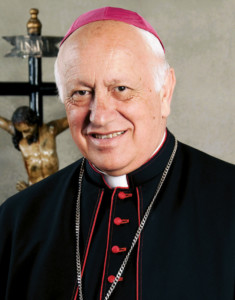 In this 72-year-old archbishop of Concepción, Chile, Pope Francis has found a Church leader after his own heart. The archbishop has taught and worked with young people, visited prisoners, and been an investigator into the possible misdeeds of religious orders in order to heal and reform them. He played a crucial role in ending an 82-day hunger strike by 34 Mapuche prisoners in October 2010. And, in June 2009, at the request of Pope Benedict XVI, he became one of four Apostolic Visitors to the Legionaries of Christ. Andrello carried out the investigation of the order in Chile, Argentina, Colombia, Brazil and Venezuela, where the Legion has 20 houses, 122 priests and 122 religious seminarians.

This Latin American cardinal is actually an Italian by birth. Ricardo Ezzati Andrello was born on January 7, 1942, in Campiglia Berici, in the region of Vicenza, in Italy. He arrived in Chile in 1959 when he was 17.

He entered the Novitiate of the Salesians in Quilpué, Valparaíso, where he studied philosophy at the Catholic University of Valparaíso, and theology at the Pontifical Salesian University in Rome, where he obtained the licentiate.

After his ordination he received a Licentiate in Religious Studies at the Institut de Pastoral Catéchetique in Strasbourg and the title of Professor of Religion and Philosophy at the Catholic University of Valparaíso.

As a Salesian priest, he was Director for Youth Ministry in the Salesian School in Valdivia. He was also a teacher in the Faculty of Theology at the Pontifical Catholic University of Chile and Vice President of the Conference of Religious of Chile and participated in the General Chapters of the Salesian Congregation in 1984 and 1990.

In 1991, he was appointed an official of the Congregation for Institutes of Consecrated Life and Societies of Apostolic Life in Rome. He was appointed as the bishop of Valdivia, Chile, on June 28, 1996, by Pope John Paul II. He was consecrated a bishop on September 8, 1996.

Pope Benedict appointed Ezzati Andrello as Metropolitan Archbishop of Santiago de Chile and the de facto Primate of the Catholic Church in Chile on January 15, 2011. He replaced Cardinal Errázuriz Ossa, whose resignation was accepted having reached the canonical age limit of 75.

Ezzati Andrello was named a Member of the Congregation for Catholic Education by Pope Francis in November 2013.