Between Benedict and Francis: My Life with Two Popes

Between Benedict and Francis: My Life with Two Popes

Archbishop Georg Gänswein, prefect of the pontifical household, talks about his tasks with Pope Francis and Pope Emeritus Benedict XVI.

The year 2013 is a year Archbishop Georg Gänswein will find hard to forget. As prefect of the pontifical household, the office organizing the Holy Father’s public audiences, Gänswein was raised to the episcopate on January 6

by Benedict XVI, whom he had served in the capacity of personal secretary for 10 years, from the time Benedict was prefect of the Congregation for the Doctrine of the Faith before being elected Pope. Since the election of Pope Francis on March 13, Gänswein’s life has definitely changed; now he spends his days and divides his tasks in the direct service of two Popes. It is a unique case in the history of the Church, an unprecedented role, one which has to be built up from scratch, which he regards as a “challenge” and a “grace.” In mid-September, he took possession of the town of which he is titular bishop, Urbisaglia, a picturesque little town in the Marches, Central Italy, which is now part of the diocese of Macerata.

In the Catholic Church, titular bishops are members of the College of Bishops, but they are not directly in charge of an existing diocese. Still, since every bishop has to be at the head of a diocese, regardless of whether it is still active or not, titular bishops are assigned an extinct diocese or a see otherwise established, but which has never been a residential diocese.

At Macerata and Urbisaglia, Gänswein had a warm and enthusiastic reception with a concert given in his honor and a toast by the mayor, the archpriest and all the people at the end of the Mass celebrated in the Collegiate Church of St. Lawrence. Before returning to the Vatican, Gänswein agreed to answer some questions about his work for the two Popes. 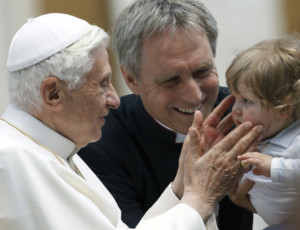 Archbishop Gänswein, you are now at the service of two Popes and act as a go-between …

Archbishop Georg Gänswein: I work as prefect of the pontifical household. The present situation, in the light of recent events, is that there are two Popes: the current Pope and the Emeritus Pope. I live with the Emeritus Pope and work for the current Pope. Being with both of them every day, I am, as it were, a go-between. This is normal. It is something which, as I have already said, I did not look for, which I could not even imagine, but it’s so. Now I think of this service as a commitment, a “challenge,” a “grace.” And since this an unprecedented situation, I have to build up my role from scratch, to find a way to carry it out. As Pope Francis and Pope Benedict are visibly different, this is not too difficult. There is continuity between them, not only theological, but also human.

Everyone can see that they both live their faith authentically, though with different expressions. Diversity, which is a resource, is often used to draw distinctions, to create opposition. This probably works as a first approach in psychological terms, but it won’t work in the long run. Pope Francis’ emotional impact would have been impossible without Benedict XVI’s resignation.

Benedict XVI is still surrounded by great affection, isn’t he?

Gänswein: Yes, he is; you can see it from the numerous letters he receives. I sort out his mail every evening. He cares a lot about it. He is deeply interested in personal letters which he receives from all over the world —from Germany, obviously, but also from Italy, Spain, and from the English-speaking world, with messages, thanks and pictures. It’s nice. At first some people wrote because they were traumatized by his resignation; I was traumatized too, even though I knew it would happen. Now most letters are letters of gratitude. 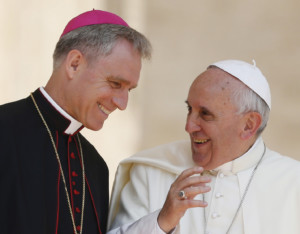 After some months, have the faithful gotten over Benedict XVI’s resignation?

Gänswein: I think so, and with great serenity lots of people pray for Pope Francis and his predecessor.

Gänswein: They have a relation of mutual liking. On landing at Fiumicino Airport at the end of his journey to Brazil, Pope Francis said to me: “On the flight back from Brazil I talked with the journalists about lots of things and about Pope Benedict too. A lot, maybe too much, as a ‘wise grandfather’ I have with me.” That was a reference to his grandmother, whom he often quotes in his speeches and who was and still is his guiding light.

Will people get used to the idea of two Popes living in the Vatican in the future? Will this affect the exercise of the Petrine magisterium in any way?

Gänswein: I don’t think this has changed just because the Pope Emeritus lives with the current Pope in the Vatican. I am deeply convinced that Benedict XVI’s resignation has affected the exercise of the Petrine ministry. This means that if the Pope is no longer able to exercise his ministry, he is allowed to resign. This is a long-established rule, but it is clear that Benedict XVI’s gesture was different from that of other Popes who have renounced the exercise of their ministry in the past. It is a new experience for everyone, a spiritual challenge, an epoch-making event.

Will the two Popes appear together at the canonization of John XXIII and John Paul II on April 27? 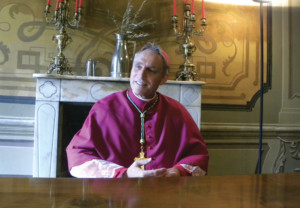 Before returning to the Vatican, Archbishop Gänswein agreed to answer some questions and explain his work for the two Popes.

Gänswein: Maybe, we’ll see. As for John Paul II, his pontificate would not have been as it was without Cardinal Ratzinger. He relied blindly on Cardinal Ratzinger’s faith, doctrine, and theological knowledge. This is true in many respects. Their mutual trust grew, as did Benedict XVI’s esteem for his predecessor. Pope Benedict always refers to Karol Wojtyła as “the Pope.” John Paul II’s was a long pontificate which lasted more than 20 years, the last of which were marked by great suffering; it was a pontificate Joseph Ratzinger did not wish to replicate. In this case, too, we are confronted with two different personalities which are yet profoundly in tune, having been through the same personal and historical events. John Paul II is definitely the person in the world Pope Benedict valued most.