The Service of a Swiss Guard

The Service of a Swiss Guard

Sergeant Stephan Probst speaks about his experience in the Pontifical Swiss Guard, in charge of the Pope’s safety. 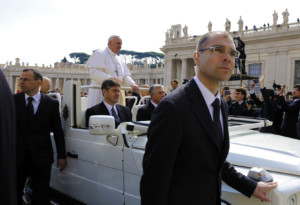 Serg. Stephan Probst on duty while Pope Francis greets the faithful from his popemobile in St. Peter’s Square before his weekly general audience.

Most of the young Swiss men who decide to come to the Vatican to serve the Pope as Pontifical Swiss Guards remain for the basic period of two and a half years, but for some of them this unique experience becomes a lifetime profession. Among them was Sergeant Stephan Probst, who in 2013 celebrated 20 years of service with the Corps, during which he served three non-Italian Popes: the Polish John Paul II, the German Benedict XVI, and the Argentinian Francis.

Moreover, he was a witness to the memorable, historic moments of the last two conclaves: in 2005, when almost the whole world came to a halt for several days after the death of John Paul II, and in 2013 when, for the first time in the modern era, a sede vacante was initiated by a Pope’s resignation, not his death, and for the first time in many centuries a non-European Pope was elected. During his 20-year service, he was responsible for a missionary shop supporting the charitable activities of the Corps. Today the shop sells Swiss Guard souvenirs, but in the past it was simply a regular shop with basic articles.

Over the past 20 years, which moments have been the most remarkable for you?

Sergeant Stephan Probst: It is hard to say, as there were so many of them: the Jubilee Year of 2000, the beatifications of John XXIII and John Paul II, the beatification and canonization of Padre Pio. A very beautiful and interesting experience was to accompany Pope Benedict XVI to Cameroon and Angola during his first trip to Africa in 2009, to see the different mentality. People in Africa always smile, and yet they have little there. They are poor, though rich in spirit, and they have a deep joy that truly strikes your heart. In Europe, there are many who could learn much from their example. 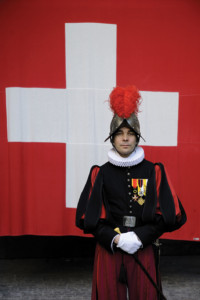 What values did you want to transmit to the young generations of Swiss Guards?

Probst: Definitely, faith and the value of prayer. I have experienced that personally. When you pray for something, you can always obtain it, if the Lord also desires it. Then, loyalty and true friendship. Moreover, for me, justice too has been important. I always worked for the good of the Swiss Guard.

You carried the flag at Pope Benedict’s farewell from the Vatican on the last day of his pontificate, and at the election of the new Pope. Those must have been very special moments…

Probst: It was a very special moment to be at the St. Damascus Courtyard to greet Pope Benedict XVI for one final time. I experienced a deep emotion saying “arrivederci” to a Pope whom I loved. It was like saying goodbye to a dear friend you will never see again, to a friend you wish all the best. He himself said that he was going to dedicate himself once more to prayer and meditation, and he would be far from the public eye. I remained very sad.

I remember the excitement in St. Peter’s Square to learn who the new Pope was after the white smoke. When I heard the name of Francis, immediately I thought about St. Francis of Assisi and his simplicity: in this name of the Holy Father is hidden the whole plan of his pontificate.

How will you remember Pope Benedict?

Probst: What I can say about him is that he has always been a humble person. I remember very well his first words from the loggia: “The cardinals have elected me, a simple and humble laborer in the vineyard of the Lord.” He has always worked for the good of the Church. I regret that he was not better understood by the media.

How was the service of the Swiss Guard during the sede vacante?

Probst: We protect the Holy Father, and during the sede vacante we are responsible for the safety of the College of Cardinals. We are at their disposal when they ask for a particular service. We were present at the entrance to Paul VI Hall during the general congregations before the conclave. During the sede vacante there is no sentinel at the entrance to the Vatican, and at the Apostolic Palace our service remains unchanged. 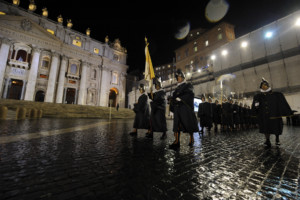 And at the conclave?

Probst: The Guards do not have contact with the cardinals. We have to do our service with absolute discretion.

Have you had an opportunity to meet the new Pope? What is the new pontiff like?

Probst: Yes, I did when he celebrated Holy Mass in the Vatican parish church of St. Anne. I was able to participate with my whole family. At the end, the Holy Father greeted all the faithful who were present. It was a grand and beautiful surprise. He blessed my daughters, who were quite overcome with emotion. The way he speaks, you can see he is a man of prayer. What he says, he truly lives in his own daily life.

With the duties of your service, is it easy to find time for family life?

Probst: The service of the Guards is very challenging, and at the end there remains little time for the family, but you can always find moments to be together.

Which values from your service in the Swiss Guards are you trying to transmit to your daughters?

Probst: My “scarlet thread,” the common thread of my life: the Faith, prayer, and to work always for the good and for justice. Of course, I cannot educate others. Everyone has to know whether or not what he or she is doing is the right thing. It is important to treat everyone well and always be kind to everyone.

The majority of the Guards stay with the Corps an average of two years. You, instead, have dedicated 20 years to the service…

Probst: When I first entered the service, it never occurred to me that I would be here for 20 years. Each person has his own plans for his life, but it is always the Lord who decides for us. I have enjoyed being here with the Guards, most especially to serve the Church; this, for me, has always been important.

I have always said that we must ask ourselves the question: for Whom are we here? It is not important what else is going on, otherwise no one can manage to go forward. This has always given me much strength and motivation.