Abbess General of the Order of the Most Holy Savior of St. Bridget 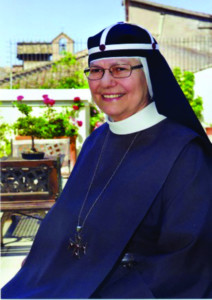 By a terse communiqué on their website, the Sisters of the Most Holy Savior of St. Bridget (in Latin Ordo Sanctissimi Salvatoris Sanctae Birgittae, O.SS.S.), more popularly known as the Bridgettine Order, have announced to the world that their beloved former Abbess, Mother Tekla Famiglietti, passed away on March 3, 2020, in Rome. She died in the Order’s headquarters, Casa di Santa Brigida (after the name of its original foundress, St. Bridget (or Birgitta) of Sweden (1303 – 1373), in Piazza Farnese, in the heart of historic Rome, after a long illness.

The funeral took place at the Basilica of San Lorenzo in Damaso the following Friday, March 6, and was presided over by Cardinal Leonardo Sandri, Prefect of the Congregation for the Oriental Churches and Vice Dean of the College of Cardinals, in the presence of other senior clergy and prelates, including a delegation of the (Lutheran) Church of Sweden and senior diplomats, including the Ambassadors of Sweden and Cuba to the Holy See. Pope Francissent a telegram of condolence, which was read out at the end of the religious service.

In his homily, Cardinal Sandri pointed out what he said were her extraordinary internal and external dimensions: a deep-rooted spirituality based on suffering and hope, whose outer projection was a tireless activity which led to a phenomenal expansion of the Order — a trajectory in a way similar to that of her spiritual mother, Holy Mother Maria Elisabetta Hesselblad, who re-established the Bridgettine Order in 1911, and was beatified in 2000 and canonized in 2016.

Mother Tekla was born in 1936 in Sturno, Italy, in the province of Avellino, not far from Naples. From a very young age, she felt attracted by religious life, so much so that she joined the Order when she was 14. As reported in the Acistampa obituary (March 4, 2020) by Angela Ambrogetti, it was love at first sight, in the sense that in her first contact with the Bridgettines, she realized it was the Order she had always dreamt of, with its perfect balance between contemplative life and active life. She spent her first years of religious life in the Order’s convent in Lugano, where she remained for 24 years, half of them in her capacity as abbess. In 1979 Mother Tekla was elected Abbess General of the Order, a position that she held for 37 years, until 2016, when for health and age reasons she decided to step down and was succeeded by Mother Fabia Kattakayam, a native of Angadikadavu, Kerala, in southwestern India.

As already said, during Mother Tekla’s many successful years as a general abbess, the number of monasteries of the Order more than doubled and the number of sisters also increased considerably.

Today, the Bridgettine Order has some 700 sisters who are active in 55 monasteries in 19 countries on four continents.As pointed out by Angela Ambrogetti, these results were achieved “not without difficulties and criticism,” a typical case in point being Mother Tekla’s initiative to establish a convent in Cuba. Those who accused her of being a friend to Fidel Castro, perhaps are not aware of her unshakeable conviction that “even if only for the salvation of just one soul, who otherwise might never have been able to meet Christ, the opening of a new house would be thoroughly worthwhile.” Wasn’t Our Lord also accused of being a friend to pagans and publicans? 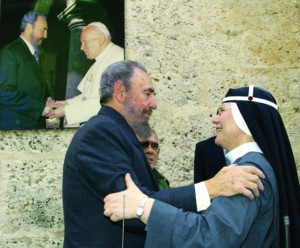 Cuban President Fidel Castro greets Mother Tekla Famiglietti during the inauguration of a new Bridgettine convent in Havana on March 8, 2003.

But there is more: ultimately her critics had to eat humble pie, since the establishment of a convent in Cuba had an almost prophetic dimension that nobody could have ever imagined at the time, probably save for Mother Tekla. But this is hardly surprising, in the sense that real men and women of God, thanks to their extraordinary far-sightedness, may envisage well ahead of time events and developments due to take place even many years later. In fact, the miracle that paved the way for Mother Maria Elisabetta Hesselblad’s canonization in 2016 happened precisely in Cuba thanks to the newly-established presence of the Bridgettines there.

Mother Tekla has been described inmanyways.In an interview,the now-defunct Catholic journal 30 Giorni (No. 12, 1999) quoted Jesús Castellano Cervera, director of the Pontifical Teresianum University of Rome, as calling her “la terza (third) Brigida” after St. Bridget and Mother Hesselblad. In the same interview, former Danish Ambassador to the Holy See Henrik Ree Iversen was quoted as saying that Mother Tekla Famiglietti “is the most powerful woman in the Catholic Church today.”

In the obituary “Moder Tekla Famiglietti har avlidit” (“Mother Tekla has passed away”), penned by former SwedishAmbassadorto the Holy See from 2002 to 2008, Fredrik Vahlquist, which appeared in the Swedish journal of Catholic culture, Signum, he referred to her as a “legendary” figure who, due to her profound friendship with John Paul II, in Rome and in the Vatican came to be “regarded with both admiration and respect, and she has been termed one of the most influential women in the Catholic Church.”

In particular, the senior diplomat points out, she proved an invaluable builder of bridges between Rome and the Nordic countries for the advancement of what he called “ecumenism in practical action.” Suffice it to think of the Chapel of St. Catherine (the saintly daughter of St.Bridget) in the crypt beneath the Casa di Santa Brigida which has been granted to the Swedish Lutheran community in Rome for their religious services, and the participation of the Bridgettine nuns in the feast of St. Henrik, martyr patron saint of Finland, on January 19, within the framework of theWeek of Prayer for Christian Unity (January 18 – 25), which is celebrated in Rome every year.

As is by now a consolidated tradition for many years, an ecumenical delegation from Finland led by the heads of its three historic Christian traditions, Evangelical Lutheran, Orthodox and Catholic, is received by the Pope as a sign of encouragement for them to proceed on the ecumenical path for an increasingly full and visible unity among Christians.

In fact, in this Nordic dimension of the Week of Prayer for Christian Unity, the Bridgettine Order fulfills a prominent role by hosting in its headquarters, Casa di Santa Brigida, the convivial function that normally follows the Mass celebrated in the national Finnish chapel in the nearby Chiesa di Santa Maria sopra Minerva. In alternate years, this service is presided over by either a Catholic or a Lutheran bishop, with the homily being preached by a bishop of the other tradition. 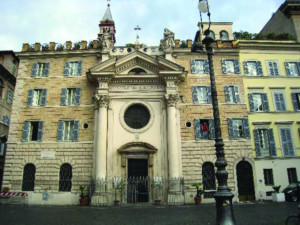 the Church of St. Bridget annexed to their house on Piazza Farnese in Rome

The Bridgettine nuns also host and participate in other closely-related religious initiatives, such the celebration of ecumenical vespers on the eve of the Mass in Santa Maria. In the last few years these vespers were presided over by the president of the Pontifical Council for Promoting Christian Unity, Cardinal Kurt Koch.

This year, due to restoration work, the Church of Santa Maria was not available and the nuns generously offered the Church of St. Bridget annexed to their Casa for the celebration of the service, which this year was the Catholic Mass.

And last but not least, Mother Tekla’s work for the consolidation and intensification of the relations between the Vatican and Scandinavian countries, and most notably Sweden, did not go unnoticed in the top echelons of the latter’s political establishment, up to the point that in 1991 H.M. the King of Sweden, Carl XVI Gustaf, bestowed upon Mother Tekla the prestigious honor of the Commander’s Sign of the North Star Order.