Archbishop Bernardito Auza, Apostolic Nuncio of the Holy See to the United Nations, addressed the UN Security Council on November 17. Expressing the Holy See’s sympathy for the victims of recent terrorist attacks, Archbishop Auza reminded the Security Council of Pope Francis’ words to the UN in New York on Sept. 25, 2015: “War is the negation of all rights and a dramatic assault on the environment. If we want true integral human development for all, we must work tirelessly to avoid war between nations and peoples.”

He also expressed the Church’s belief that “grassroots movements, faith-based organizations and local communities play [an important role] in the prevention of conflict and in peacebuilding.” — Vatican Radio

Pope thanks people of Bosnia & Herzegovina

Pope Francis received the chairman of the Pres­idency of Bosnia and Herzegovina, Dragan Čović.

Čović is the current occupant of the head position of the rotating collegial presidency, put in place in 1996 as part of the constitutional settlement that brought an end to the 1992-1995 conflict in the former Yugoslavia.

The Pope told the president that he personally has learned from the example of the people of Bosnia and Herzegovina, especially about the capacity to suffer; to forgive and to strive for forgiveness; to come together and work for the common good; and to dialogue.  — ZENIT.org

Pope Francis on November 24 visited the Institute for the Works of Religion (IOR), commonly known as the Vatican Bank, and during his visit he met with the Board of Superintendence where he announced the appointment of a new director general of the institution, Dr. Gian Franco Mam­mi. Dr. Mammi, who was vice-director of the Vatican Bank, will be assisted for the time being by Dr. Giulio Mattietti until a new vice-director is appointed. — Vatican Radio 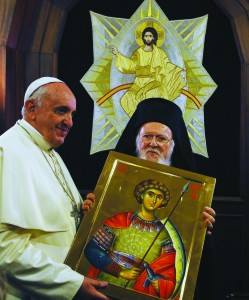 In a November 30 message marking the feast of the apostle Andrew, patron saint of the Orthodox world, Pope Francis urges Catholics and Orthodox to offer a “credible and effective witness” to the Christian values of trust, respect, charity and reconciliation.

The message was hand delivered to the Orthodox leader Patriarch Barthol­o­mew I in Istanbul by the head of the Pontifical Council for Promoting Christian Unity, Cardinal Kurt Koch, who led a delegation to the Patriarchal Church of St. George for the feast of St. Andrew on November 30. Asking all Orthodox faithful to pray that the Jubilee Year may bear the spiritual fruits for which we yearn, the Pope assured the Patriarch of his prayers for the Pan-Orthodox Synod which is due to take place in 2016. (Vatican Radio)

Archbishop of Paris prays for “the grace of a firm heart”

The Archbishop of Par­is, Cardinal André Vingt-Trois, on November 15, after the terrorist attacks, issued a powerful 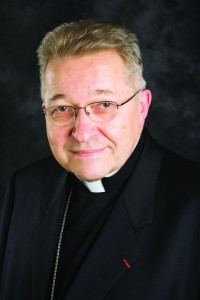 “Our city of Paris, our country, was hit last night with particular savagery and intensity. After the attacks of last January, after the attack in Beirut this week and many others in these past months, including in Nigeria and other African countries, our country knows anew the pain of grief and must face the barbarism spread by fanatical groups…

“Faced with the violence of men, may we receive the grace of a firm heart, without hatred. May the moderation, temperance and control that has been shown so far, be confirmed in the weeks and months to come; let no one indulge in panic or hatred. We ask that grace be the artisan of peace. We need never despair of peace if we build on justice.” — ZENIT.org

Pope Francis meets with the President of Ukraine

Pope Francis on November 20 met in the Vatican with the President of Ukraine, Petro Poroshenko, and his wife Maryna. Poroshenko subsequently met with the Secretary of State Cardinal Pietro Parolin, accompanied by Archbishop Paul Richard Gallagher, Secretary for Relations with States. 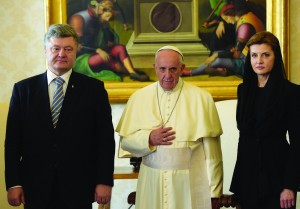 Both parties reaffirmed the good relations between the Holy See and Ukraine, sharing the hope that political solutions may be favored, starting with the full implementation of the Minsk Accords. The meeting provided an opportunity to highlight the important role of the Church in society, as well as the contribution of the Greek Catholic and Latin-rite communities to the life of the country. — Vatican Radio

After the attacks in Paris which killed over 120 people, a Church leader in Syria is calling for the international community to stop the funding of terrorist groups.

“Terrorism is an ideology that does not spare anyone,” Bishop Georges Abou Khazen, O.F.M., the Apostolic Vicar of Aleppo, told the Fides news agency November 14.

“In Syria, we know this well, because for years we have suffered from the terrorist attacks which have created thousands of refugees,” said Bishop Khazen. “All of this happened while the international community was indifferent.” 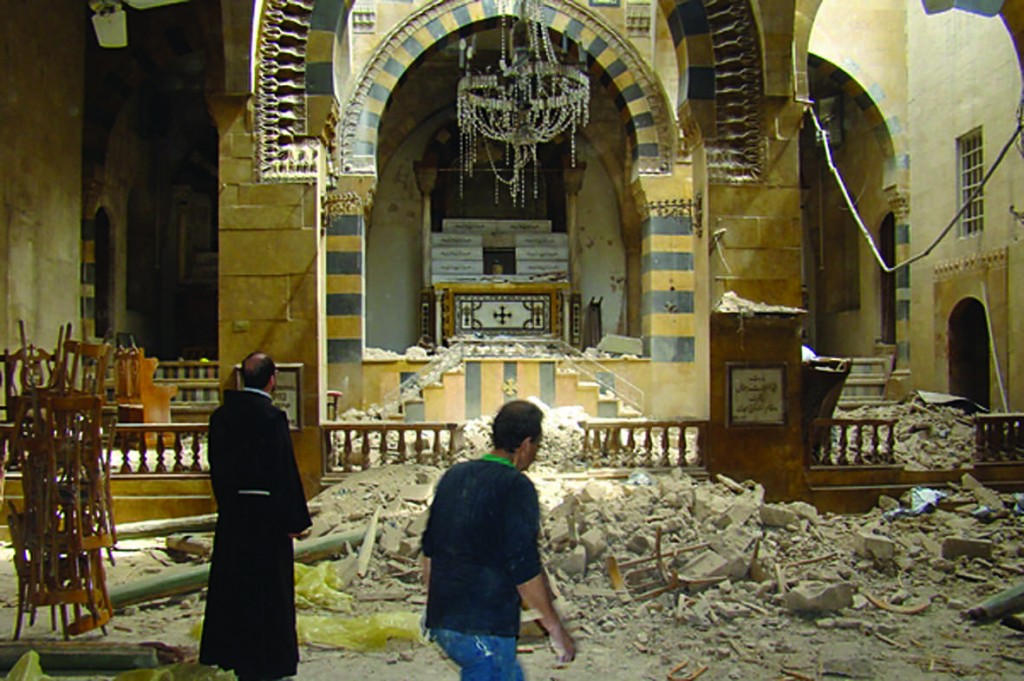 A church damaged by bombing in Aleppo in Syria. The city has suffered much since the beginning of the conflict between the governing regime and the opposition began in March of 2011

Two eminent theologians from Lebanon and Brazil have been awarded the 2015 Ratzinger Prize. The winners of the prize, often referred to as the “Nobel Prize in Theology,” were chosen by the Benedict XVI Foundation, which aims to promote theology in the spirit of Joseph Ratzinger.

Professor Nabil el-Khoury, aged 74, is a professor of philosophy and literature. He taught at the

Lebanese University in Beirut and translated the entire collected works of Joseph Ratz­inger (from before and after his election as Pope) into Arabic.

The second recipient is the 79-year-old Jesuit Professor Mario de França Miranda, who taught in a number of Institutes including the Pontifical Catholic Un­i­versity of Rio de Jan­eiro and the Jesuit Faculty of Theology in Belo Horizonte.

Announcing the winners in the Vatican Press Office, the president of the Foundation, Monsignor Giuseppe Scotti, quoted Pope Francis’ Apostolic Exhortation Evangelii Gaudium, stressing that the university is a privileged place in which to “articulate and develop” the commitment to evangelization in an integrated and interdisciplinary way. — Vatican Radio

Child protection experts from 13 East and West European nations gathered in Luxembourg November 18, the first European Day for the Protection of Children, for a conference entitled “One Crisis — Different Responses.”

“When I became archbishop four years ago, I got the whole dos­sier on sexual abuse — mostly relating to past 30, 40 years ago — and I must say I had to read them in the chapel, because you feel sick to read it,” said Archbishop Jean-Claude Hollerich of Luxembourg. He said the sexual abuse crisis has affected the Church in Luxembourg, and people have lost their once strong attachment to the Catholic faith.

“We were a very Catholic nation,” the archbishop said. “We are now probably one of the most secularized states in Europe,” — Vatican Radio

Preacher of Papal Household speaks to Church of England Synod

Britain’s Queen Elizabeth and leaders of the Church of England welcomed the words of the papal preacher, Fr. Raniero

Cantalamessa, as “significant,” “forthright” and “a very strong message.” The Franciscan friar, who is the preacher of the papal household, gave the sermon in Westminster Abbey during the inauguration of the Tenth General Synod of the Church of England, with Queen Elizabeth II in attendance.

“In many parts of the world,” Fr. Cantalamessa stressed, “people are killed and churches burned, not because they are Catholic, or Anglican, or Pentecostals, but because they are Christians. In their eyes, we are already one!” — Vatican Radio

Commending them for the methodology they used for dialogue and bringing stability to Tunisia, the Pontiff said the Nobel laureates accomplished their work “with their hands and their hearts.”

The 2015 Nobel Peace Prize was awarded to the Tunisian National Dialogue Quartet, for what the Nobel Committee called “its decisive contribution to the building of a pluralistic democracy in Tunisia in the wake of the Jasmine Revolution of 2011.” — ZENIT.org