“I am ready to face the persecution” 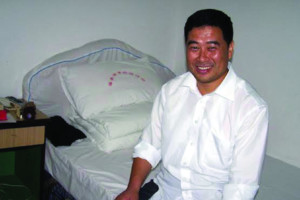 Until 2018, Bishop Guo was the ordinary of the Diocese of Mindong, located in the southern province of Fujian.

However, with the signing of the “provisional agreement” between the Vatican and China in September of 2018,  which resulted in Pope Francis lifting the excommunications of several invalidly ordained bishops in China, including Bishop Zhan, the Underground Church in China was deeply disturbed. At the request of Pope Francis, Bishop Guo voluntarily stepped down as the ordinary of the Mindong diocese in favor of Bishop Zhan, to become his auxiliary.

This was among the conditions Chinese officials had proposed to Bishop Guo during his 2017 detention. Bishop Guo told the New York Times last February that “we must obey Rome’s decision,” and that “our principle is that the Chinese Catholic Church must have a connection with the Vatican; the connection cannot be severed.”

Faithful to the Holy See, Bishop Vincent Guo is under constant pressure from the Communist authorities, who
regularly order his imprisonment; yet, he says, “I am ready to face the persecution with other priests.” Bishop Guo was born in 1958, and since his ordination to the priesthood in 1984, he has been a zealous member of the Catholic underground Church in China. Guo has been imprisoned several times, and since 2006, he has been regularly placed under house arrest by the Communist police.

According to AsiaNews, the 61-year -old auxiliary bishop is reportedly exhausted by his ordeal, having been harassed for more than a year by the Chinese government. Although under the watch of government security guards, Guo
escaped from the headquarters of Msgr. Vincenzo Zhan Silu, the officially recognized bishop of Mindong, and is now in hiding.

While Bishop Vincent Guo may be, as AsiaNews puts it, the best-known “victim of the Sino-Vatican agreement,” he is, by far, not the only one.