A young Nigerian seminarian became a martyr for the Faith

“Change your evil ways or perish”

Nigeria, according to many worldwide indices, is one of the worst nations in the world for religious freedom and the rule of law. Christians, who make up roughly half the population, are specially targeted for persecution and death in Muslim areas. One December 2020 report by the Heritage Foundation cited just one example:

“The Fulani raiders arrived under cover of darkness with their jihadist chants and their AK-47s. The marauders swiftly maimed and murdered Christians while burning down every structure and pillaging what remained. Hundreds of similar incidents have occurred. We reviewed one confidential list that precisely documents attacks by Fulani militants on seventy-nine Christian villages over the last five years in one state alone.”

In May, the Catholic News Service reported that a Nigerian Catholic seminarian, Michael Nnadi, 18, one of four seminarians who had been kidnapped from Good Shepherd Seminary by Islamic bandits, had been killed for his refusal to stop preaching the Gospel to his captors.

According to Nigeria’s Daily Sun newspaper, the jailed Mustapha Mohammed, 26, leader of a marauding gang and admitted killer of Michael Nnadi, praised the seminarian’s “outstanding bravery,” and said Nnadi “told him to his face to change his evil ways or perish.”

The other three seminarians were released, having sustained injuries, some of them serious.

“With immense sorrow, we must inform you that the last seminarian held by kidnappers, Michael, was murdered. The rector of the seminary of Kaduna identified the body in the afternoon,” Aid to the Church in Need tweeted February 1, 2020. 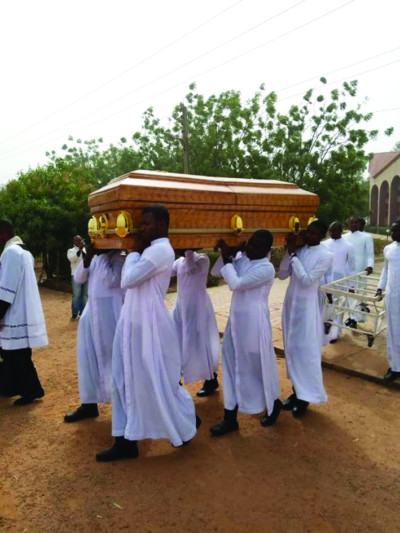 Michael Nnadi is a martyr for the Faith.

And in 2020, he was not even remotely alone. Some estimates put Christians killed in hatred for their faith last year in the thousands, with churches attacked and Christians imprisoned in the tens of thousands.

As Pope Francis pointed out just a month after his election, and has repeated many times since, “The Church has more martyrs now than during the first centuries.” And specifically, Catholic missionaries were among those targeted for death because of their faith; 20 of them were killed in 2020.

As in previous years, the most deadly continents for Church workers were the Americas and Africa.

The Vatican-based news agency, which releases an annual list of murdered Church workers, uses the term “missionary” to refer to “all the baptized engaged in the life of the Church who died in a violent way.”

Nigeria saw more faith-motivated killings when, in mid-July, five aid workers were killed in its West Africa Province by the Islamic State (ISWAP), a Boko Haram faction in northeast Nigeria.

In a video, the fighters said that the executions were a warning to “all those being used by infidels to convert Muslims to Christianity.”

And in what was once known as “Christian Europe,” a suspected Islamic terrorist on October 29 hacked to death three worshippers at the Basilica of Notre Dame in Nice, France.

The three victims were Simone Barreto Silva, a 44-year-old mother of three; a 60-year-old woman who had come to the church to pray; and Vincent Loquès, the church’s 55-year-old sacristan.

“The stones cannot cry out their horror,” said Nice’s Bishop André Marceau at the November 1 funeral Mass. “Three lives were stolen in the name of a false god.”

Also in Europe, Fr. Roberto Malgesini, 51, of the Diocese of Como, Italy, was found near the rectory where he lived with numerous stab wounds, including one on the neck which caused his death, on September 15.

Fr. Malgesini had begun his morning routine distributing breakfast to the needy when the killer, lying in wait, accosted him; he was a homeless man from Tunisia the priest had been assisting.

At a General Audience September 16, Pope Francis praised God for “the martyrdom of this witness of charity toward the poorest.”