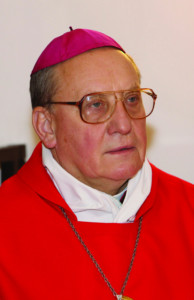 A courageous bishop who served in Moscow and Minsk

Ever the “good soldier”

On the evening of January 6, 2021, just-retired Archbishop Tadeusz Kondrusiewicz of Minsk-Mogilev, Belarus, celebrated Mass for the feast of the Epiphany at the Cathedral of St. Francis Xavier in his hometown area of Grodno, in western Belarus near the border with Poland. It was a very emotional time for the Grodno Catholics and for the archbishop himself; the requisite resignation every bishop offers the Pope upon his 75th birthday had just been accepted and the archbishop was bidding his flock a final farewell.

Archbishop Kondrusiewicz had been barred on August 31, 2020, from returning to Belarus after visiting family in Poland because he had criticized the government crackdown on protests against the contested re-election of Belarusian President Alyaksandr Lukashenko. The archbishop was allowed to return Christmas Eve after an envoy from the Vatican met with Lukashenko in Minsk. “When I crossed the border, I knelt down and prayed, I kissed this land,” Kondrusiewicz said in comments on December 24, adding that “the Fatherland cannot be thrown out of the heart.”

The archbishop conducted the Epiphany Mass in Polish, switching from time to time to Belarusian and Russian. He said that Belarusians now face many tests — both the coronavirus epidemic and the political crisis that the country is now experiencing. “And everyone must give himself an answer, who I am before God, before Jesus Christ, and what kind of future I wish to build for myself, my family, city, my country, and land where I live,” the Metropolitan said. “Today our society is divided […], but someday it will all end and the wounds of hatred will heal. These wounds require an elixir of love and forgiveness. Everything depends on us, and our destinies also depend on us.”

Longtime observer of Eastern Christianity and Inside the Vatican contributor Peter Anderson said this in tribute to Archbishop Kondrusiewicz: “In 1988, a group of us in Seattle decided to form an ecumenical ‘sister churches’ program between the Christian churches of Seattle and the Christian churches of Leningrad. It was during those exciting times when the churches of the Soviet Union were first regaining their freedom after over 70 years of
persecution. 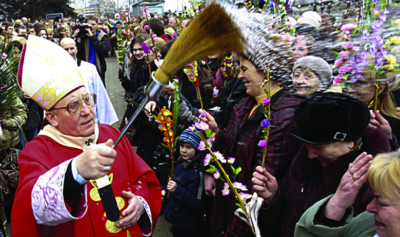 “In June 1993, Archbishop Kondrusiewicz, then Apostolic Administrator of European Russia, came to Seattle for three days as a guest of the program, staying at our home. Picking him up at the airport, I was surprised that his total luggage was one very small handbag. He was a wonderful guest with no pretensions; each day he would put on some short athletic pants and jog through our neighborhood. Both my wife and I were very impressed by him both as a bishop and a person.

“On February 11, 2002, the Vatican announced that the four Catholic apostolic administrations in the Russian Federation had become dioceses, forming an ‘ecclesiatical province,’ and made Archbishop Kondrusiewicz a metropolitan archbishop responsible for them. This administrative move caused an uproar in the Russian media and harsh criticism by the Orthodox Moscow Patriarchate, which claimed that it was an effort to make Russia a province of the Vatican! Of course, a ‘province’is simply a Catholic term used for the area of a metropolitan archbishop (the United States has 35 of them).

“Being in Moscow, Archbishop Kondrusiewicz was in the center of the storm. He also defended the Church against accusations of proselytism, which in turn irritated critics further. In subsequent years, the Vatican tried to improve relations with the Moscow Patriarchate; some believe the transfer of Archbishop Kondrusiewicz to Minsk, Belarus, in 2007 was part of that.

“Shortly after his transfer, he referred to himself as a ‘soldier of the Church’ — he accepted orders without complaining. As in Moscow, in Minsk he spoke out against what he considered wrong in the current crisis in Belarus, and accepted the consequences.”

Ever the good soldier, he now accepts without objection the decision of Pope Francis to begin his retirement.

“Thank you to everyone who prayed these four months” of his forced exile, Archbishop Kondrusiewicz said at his farewell Mass. “God works miracles, but with the help of people.”