The Wisdom of Birds

The Wisdom of Birds

Among many species, beauty is more important than life 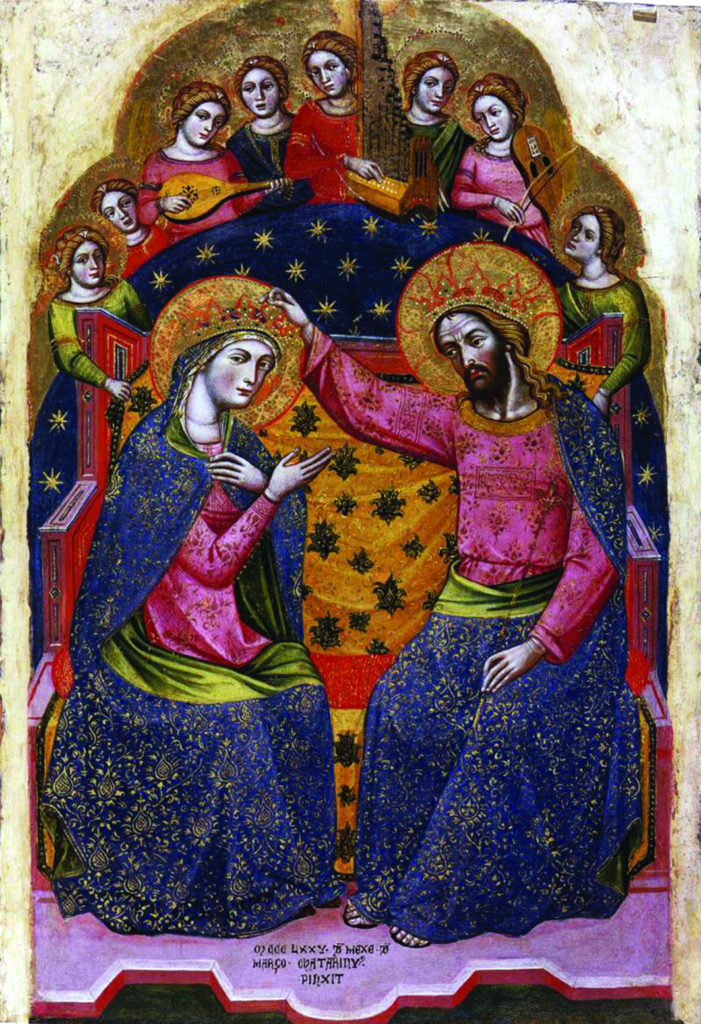 The Crowning of the Virgin by Catarino, Gallerie dell’Accademia, Venice, Italy

I was very sad that day. I don’t know why I walked into a church near where I live. This church is an architectural jewel with a beautiful mosaic, known all over the world. In the church there were only a few tourists, who were walking around curiously. I sat down at the back and began to fix my eyes on that famous mosaic in which there were Christ and the Blessed Virgin, staring at me. It was as if there were only we three, and what bound us so strongly was the beauty of those images, because beauty is not something neutral: beauty can strike you in a way that nothing else can. That beauty helped me, and also gave meaning to the suffering I was feeling at that moment; it seemed to me like a medicine, as if my soul had been nourished by what it missed so much.

Beauty is nourishing. Ugliness is not. But ugliness is much more active than beauty, which is eternal in its shining. The philosopher Marcello Veneziani said in his Letter to the Italians: “The trouble is that beauty is; instead the ugly advances, moves, speaks, does. Beauty is inert, passive, helpless, while the ugly advances, incedes, is agitated. Beauty is a legacy, a lineage, sometimes a ruin, however declined in the past or lost in the ancient, while ugliness is a language, a way of doing, understanding and willing, between technique and administration. This is our economic and metaphysical, aesthetic and social, urban and literary tragedy. The beautiful is, the ugly becomes; the beautiful poses, the ugly is in perpetual motion. Beauty pertains to the sphere of being but not to that of the eternal and immutable. The ugly, on the other hand, pertains to the sphere of making and becoming, and is viral, expansive, progressive” (all translations are from the Italian version of these texts and are mine).

And we have seen in recent decades how ugliness has taken over art, music and architecture in our churches. The feeble resistance of some knights of good taste was not able to do much. The Russian Orthodox writer Vladimir S. Soloviev said: “It might seem excessive to leave the salvation of the world to beauty, when it is still necessary to save beauty itself from the various artistic and critical experiments that try to substitute the deformed-real for the beautiful-ideal” (On Beauty).

And here we are not even talking about artistic experiments, but about selling off the beauty of tradition for the byproducts of contemporaneity.

In English: “Beauty consists in the components that make up [the beautiful object] as regards the matter, but in the splendor of the form as regards the shape [and consequently] as well as the beauty of a body it requires that there be a due proportion of the members and that the color shines on them […], likewise the universal essence of beauty requires the reciprocal proportion among what is equivalent [to the limbs in the body], be they parts or principles or whatever other element the luminosity shines upon of the form.” (From Albertus Magnus, Super Dionysium de divinis nominibus, IV, 72 and 76, in Opera omnia XXXVII / 1:182-183 and 185; cited in Umberto Eco, Art and beauty in medieval aesthetics, 1986.)

The law of proportion helps to discern beauty when it is ordered to an aesthetic end, and it recalls the supreme order that beauty intends to place before us and within us.

Why don’t we give our young people beauty?

Why do we give them cheap cosmetic food for the soul?

How is it possible that we do not understand that we must educate young people, including their aesthetic sense? 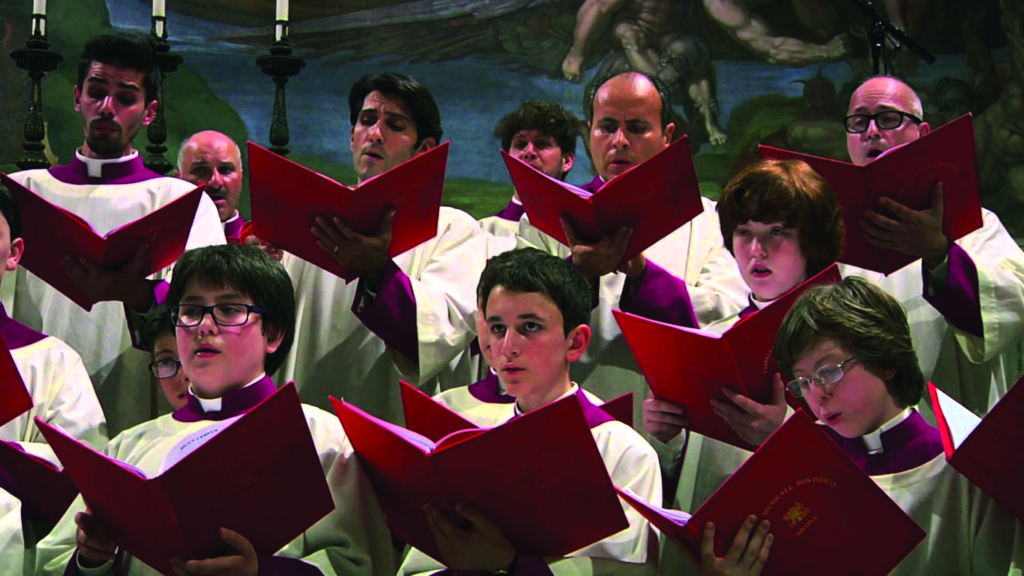 A choir sings in the Sistine Chapel at the Vatican

If they are well educated, they will then become champions of beauty, of the good and of the true… “Youth” as a category in its own right has sought to ruin not only sacred music, but even the young themselves. But young people are much better than they are led to believe.

Romano Amerio in his fundamental Iota Unum frames the problem well: “Concluding this analysis of the new attitude of the world and of the Church towards youth, we will note that here too a semantic alteration has taken place and that the terms ‘paternal’ and ‘paternalistic’ have become terms of contempt, as if the education of the father, as a father, were not an excellent exercise of wisdom and love, and as if all the pedagogy with which God educated mankind in the way of salvation were not paternal. But who does not see that in a system, in which value rests on authenticity and the refusal of any imitation, the first refusal is the refusal of paternal dependence?

“The truth, going beyond the hypocorisms [Note: “Hypocorism,” Maestro Porfiri clarifies, “means to treat with petty names young people when they should be taught to be better adults and not to stay in an infinite youth”] of clerics and laity is that youth is a state of virtuality and imperfection that cannot be possessed as an ideal state or taken as a model. Furthermore, youth is valid in the prospect of a future, of a hope for the future, so much so that when the future is fulfilled, youth diminishes and is lost. The tale of Hebe becomes the tale of Psyche.

“Indeed, if youth is deified, it is thrown into pessimism, because it makes it want to perpetuate itself, while it is not possible.

“Youth is a project of non-youth and mature age should not be modeled on it, but on matured wisdom. After all, no age of life has as a model for its becoming an age of life, neither one’s own nor others. In fact, the model of each is given by the deontological essence of man, which is to be sought and lived, identically, in each age of life. Here, too, the spirit of vertigo makes the dependent turn towards non-dependence and the insufficient towards self-sufficiency.”

How much wisdom there is in these words!

Promote education in beauty in your churches. Young people are much better than some clerics think…

I have experienced this and I can tell you that when young people are enthusiastic about it, they become the heralds of beauty and carry this treasure within, throughout their whole lives…

What harm was done to the younger generations by neglecting this, and treating them as if theirs was a perfected “age” in its own right, and not, rather, a preparation for mature age.

Sacred music is itself a pedagogy of beauty: it is that via pulchritudinis (“way of beauty’) that we travel towards the Father. We don’t need pastoral plans and ecological conversions to save our souls — we need beauty, goodness and truth. Vladimir S. Soloviev, already quoted above, said: “Among many species of birds, the complicated ornaments of males not only cannot have any utilitarian value, but are indeed directly hindering because they develop at the expense of mobility, hinder flight and ability to race, and betray their presence in the face of the enemy who pursues them; but evidently, for them, beauty is more important than life.”

Beauty is more important than life; we should never forget that. 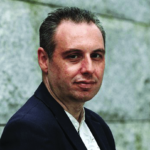 * Aurelio Porfiri is a composer, author, honorary master organist at churches in Rome and Macau, China, newsletter editor and YouTube host. Find him at aurelioporfiri.com.