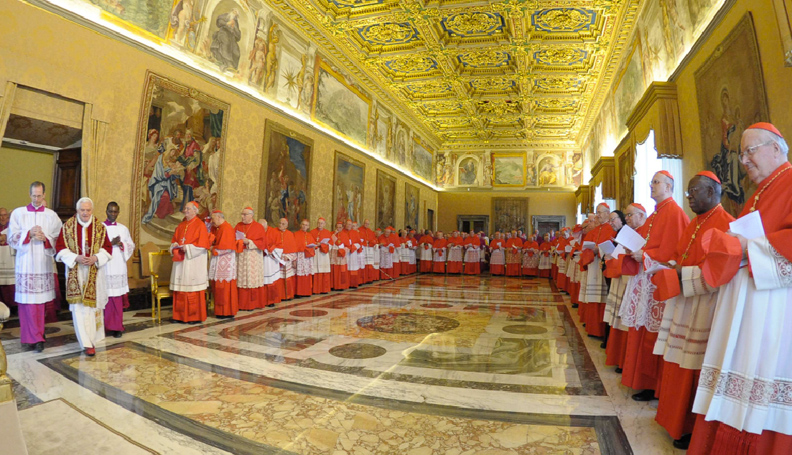 Pope Benedict XVI arrives for a meeting with cardinals and bishops during an ordinary public consistory at the Vatican February 21, 2011 (CNS photo/L’Osservatore Romano via Reuters)

Note: On December 28, Sandro Magister, a veteran and respected Italian “Vaticanist” based in Rome, released an unsigned article saying that Pope Benedict will hold a Consistory to create new cardinals on February 19. The Vatican has not officially confirmed the news, so it is not yet certain. But it is well known that there are more than a dozen places “open” in the 120-member College of Cardinals, as a number of cardinals have recently reached the age of 80 and are, under current rules, no longer eligible to vote in a papal conclave. So it is clear that Pope Benedict will in any case soon hold a Consistory to fill those spots. Here are excerpts from the Magister newsflash. —The Editor

In the year to come, “a Dio piacendo” (“God willing” or “if it is pleasing to God”), the fourth consistory of Benedict XVI is scheduled to take place, with the creation of new cardinals…

The most probable date of the new consistory is the weekend before February 22, the liturgical feast of the Chair of Saint Peter: a feast traditionally associated with consistor­ies, but not usable next year, because it coincides with Ash Wednesday.

In all three previous consistories of Benedict XVI — on March 24, 2006, November 24, 2007, and November 20, 2010 — the official announcement was made about a month in advance, and always at the end of a Wednesday General Audience: respectively on February 22, October 17, and October 20 of those years. If this temporal rhythm is kept this time as well, it can be hypothesized that the names of the new cardinals to be created on February 19 could be made known at the end of the audience on Wednesday, January 18…

So far, Benedict XVI has created 62 cardinals… 57 of them are still alive, and 46 of them have the right to vote.

On the basis of norms established by Paul VI in 1973 and confirmed by John Paul II, the maximum number of cardinal electors — those who, in keeping with the 1970 motu proprio Ingravescentem aetatem, are under the age of 80 and therefore have the right to participate in an eventual conclave — is fixed at 120.

There are currently 192 cardinals. Those under the age of 80 amount to 109, dropping to 107 by February 19 — in addition to Cardinal Zen (who turns 80 on January 13), in fact, the Portuguese José Saraiva Martins will turn 80 on January 6. This means that at the next consistory, there will be at least 13 new cardinals, but more likely 15 or more, considering that in the following months of 2012 another 11 cardinals will turn age 80.

So far Benedict XVI has exceeded the ceiling of 120 by only one (this happened in 2007 and 2010). So this time the extra appointments could be slightly more numerous, but still well below those had with John Paul II, when – after the consistories of 2001 and 2003 – the record number of 135 cardinal electors was reached.

In the consistory of 2010, half of the posts for cardinals went to directors of the curia and of other Roman ecclesiastical offices intended to be occupied by a cardinal. For 2012, the appointments expected concern the Italians Fernando Filoni (Prefect of Propaganda Fide), Domenico Calcagno (President of APSA), Giu­seppe Versaldi (president of the prefecture of economic affairs of the Holy See) and Giu­seppe Bertello (President of the Governorate of Vatican City-State), the Brazilian Joao Braz de Aviz (Prefect of the Congregation for Religious), the American Edwin F. O’Bri­en (Pro-Grand Master of the Equestrian Order of the Holy Sepulcher) and the Spanish Santos Abril y Castello (Archpriest of the Papal Basilica of Saint Mary Major). To these could be added Francesco Coccopalmerio (President of the Pontifical Council for Legislative Texts), and/or Rino Fisichella (President of the newly created Council for Promoting the New Evangelization).
As for the dioceses traditionally led by a cardinal, it seems that the practice will be respected that calls for not creating a new one where an emeritus is present who has not yet turned 80. An exception, if there is one, could be made for Timothy Dolan in New York, and for the Dominican Dominik Duka in Prague, the cardinals emeritus of which will turn 80, respectively, on April 2 and May 17.

The list should include the new archbishops of Berlin (Rainer Maria Woelki), Tor­onto (Thomas C. Collins), and Utrecht (Wil­lem J. Eijk), the bishop of Hong Kong (John Tong), as well as the new Maronite patriarch Bechara Rai in Lebanon and the new major archbishop of the Syro-Malabars in India, George Alencherry.

A more complex question is that of the episcopal sees in which the cardinal emeritus has not gone into retirement, but has been called to another post in the Roman curia. This is the case of Florence, Toledo, and Quebec, whose “archbishops emeritus”… are now, respectively, president of the Pontifical Council for the Family (Ennio Antonelli), Prefect of the Congregation for Divine Worship (Antonio Cañizares) and Prefect of the Congregation for Bishops (Marc Ouellet)...