Pope Francis: Heartfelt solidarity with those affected by Philippines typhoon

Pope Francis: Heartfelt solidarity with those affected by Philippines typhoon

Pope Francis today expressed his deepest sympathy for those in the Philippines who have suffered from a terrible typhoon which has taken more than 10,000 lives.

Francis also reflected during his midday Angelus on the Gospel reading for this Sunday, setting forth powerfully his understanding of the meaning and reality of eternal life. His words may offer some comfort, perhaps, to those who are in sorrow over these events in the Philippines, and similar tragic events.

Pope Francis today ordered that a telegram of condolence be sent to the President of the Philippines, expressing his solidarity with those affected by Typhoon Haiyan. The typhoon, one of the worst on record, is feared to have killed as many as 10.000 people on Leyte island, which bore the brunt of the storm.

According to Reuters, “one of the most powerful storms ever recorded killed at least 10,000 people in the central Philippines, a senior police official said on Sunday, with huge waves sweeping away coastal villages and devastating one of the main cities in the region.”

Philippine Interior Secretary Manuel Roxas, who had been in Tacloban, where the storm hit, since before the typhoon struck the city, told Reuters: “From a helicopter, you can see the extent of devastation. From the shore and moving a kilometer inland, there are no structures standing. It was like a tsunami. I don’t know how to describe what I saw. It’s horrific.” 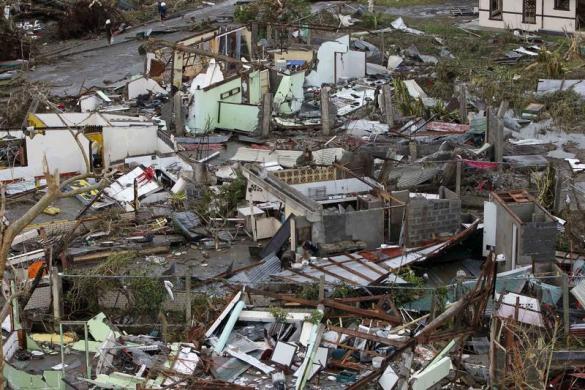 Images of Tacloban city’s devastation are difficult to view. Up to 10,000 are dead

Below is the full text of the Pope’s telegram, signed by Archbishop Pietro Parolin, Vatican Secretary of State.

President of the Republic of the Philippines

Deeply saddened by the destruction and loss of life caused by the super typhoon, His Holiness Pope Francis expresses his heartfelt solidarity with all those affected by this storm and its aftermath.

He is especially mindful of those who mourn the loss of their loved ones and of those who have lost their homes.

In praying for all the people of the Philippines, the Holy Father likewise offers encouragement to the civil authorities and emergency personnel as they assist the victims of this storm.

He invokes divine blessings of strength and consolation for the Nation.

Pope Francis also prayed for the victims of the typhoon after the Sunday Angelus in St Peter’s Square. He firstly called for silent prayer, and then led the faithful in a recitation of the Hail Mary. Furthermore, he urged those present to help their brothers and sisters in the Philippines concretely, as well as through prayer.