Pope Francis has authorized 12 decrees on miracles, martyrdom and heroic virtues of 22 men and 5 ‎women. ‎ 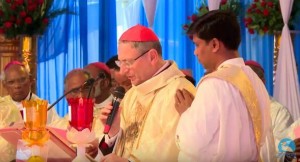 Pope Francis on Monday took 27 men and women a step closer to sainthood.  The Pope received Card. Angelo Amato, the Prefect of the Congregation for the Causes of Saints and authorized him to promulgate 12 decrees regarding 22 men and 5 women from as many as 8 nations.  They concern 3 miracles, a martyrdom and 8 heroic virtues.  Nineteen candidates, including 3 miracles and the martyrdom of 16,  have been cleared for Beatification, the penultimate stage before Canonization or sainthood.

Among the 12 is the decree on the heroic virtues of the noted “Rosary Priest”, Servant of God Fr. Patrick Peyton of the Congregation of Holy Cross (CSC).

Born on 9 January, 1909 at Carracastle, Ireland, Fr. Peyton died on 3 June, 1992, in San Pedro, US.  Fr. Peyton is the founder of the “Family Rosary Crusade.”  He was the first to proclaim the phrases “The family that prays together stays together” and “A world at prayer is a world at peace.”

Another person whose heroic virtues have been recognized is Servant of God, Cardinal Stefan Wyszyński, the former primate of Poland. The cardinal who was Bishop of Lublin and later Archbishop of Warsaw and Gniezno died on 28 May, 1981, in Warsaw.  He is known for his struggle against the Communist state over freedom and the basic rights of the Church, and he even suffered imprisonment.

Among the 12 decrees are 3 miracles through the intercession of 2 priests and a nun who have been cleared for Beatification.  They are French priest Fr. Giovanni Battista Fouque, who died on 5 December, 1926; Spanish Jesuit Father Tiburzio Arnáiz Muñoz, who died on 18 July, 1926; and Venezuelan Sister Maria Carmen Rendiles Martínez, foundress of the Institute of the Servants of Jesus of Venezuela, who died on 9 May, 1977.

Pope Francis also authorized a decree on the martyrdom of Servants of God, Father Dio Teodoro Illera Del Olmo of the Congregation of St. Peter in Chains and his 15 companions, who were killed for their faith during the 1936-1939 .  All 16 martyrs have been cleared for Beatification.