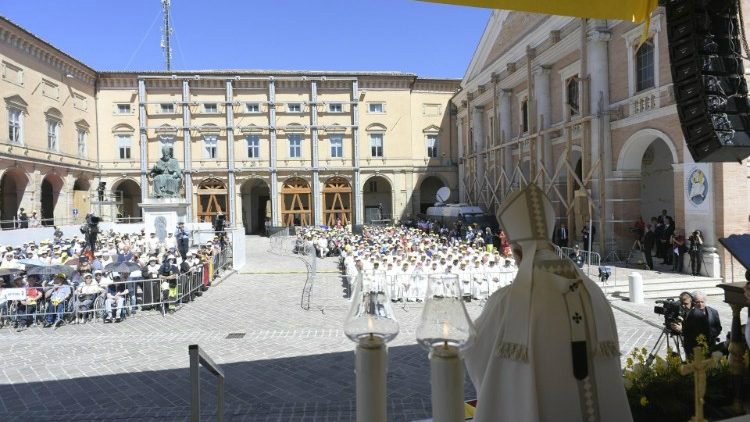 After celebrating Holy Mass in Camerino, in the Italian Marches Region, Pope Francis recites the Angelus Prayer, thanking those who helped prepare for his visit, and remembering “the saints next door”. He also appeals for a resolution to conflict in the Middle East.

Before reciting the Angelus after Mass, Pope Francis voiced his concern over “increasing tensions in the Persian Gulf.”  “I call on everyone”, he said, “to use the instruments of diplomacy to resolve the complex problems of the conflicts in the Middle East. I also renew to the international community my heartfelt appeal for every possible effort to be made to promote dialogue and peace.”

The Pope also recalled that June 20th marks United Nations World Refugee Day. “This day invites everyone to show solidarity with men, women and children fleeing wars, persecution and violations of fundamental rights”, he said. “May our ecclesial and civil communities be close to them and attentive to their needs and sufferings”.

Pope Francis then proceeded to greet not only those present in Piazza Cavour, in the town of Camerino, but also those who, “through radio and television, have united themselves spiritually to this Holy Mass”. He remembered especially “the sick, the elderly, and prisoners”, and thanked “all those – institutions, organizations, associations and individuals – who worked for this brief but intense visit”.

“May you walk together and joyfully in the way of faith, hope and charity”, said Pope Francis, “faithful to the many witnesses of holiness of which your land is rich”. Aside from famous individuals like St Nicholas of Tolentino, the Pope said he was thinking of “the many figures of “saints next door” who have not been beatified or canonized, but who supported and transformed families and communities with the strength of their Christian lives”.

In this regard, Pope Francis mentioned the beatification, on Saturday in Sardinia, of Edvige Carboni. He described her as “a simple woman of the people who in her humble daily life embraced the Cross, giving witness of faith and charity”. The Pope invited those present to applaud the new Blessed, and said we should “give thanks for this faithful disciple of Christ, who spent her whole life in the service of God and her neighbour”.