Pope at Angelus: Christians called to serve God and neighbour as Jesus

Pope at Angelus: Christians called to serve God and neighbour as Jesus 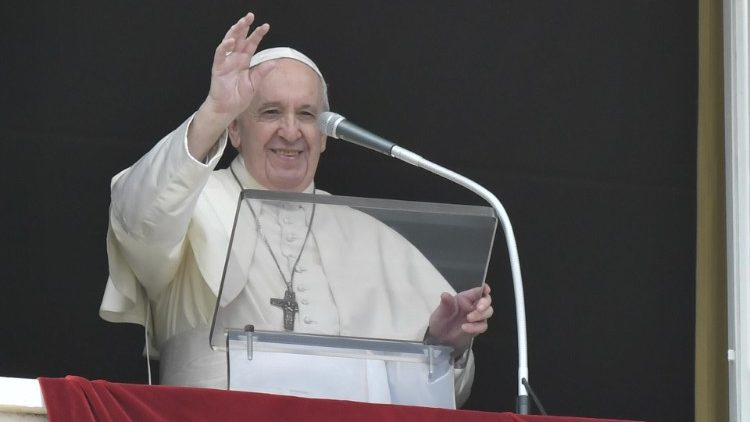 Pope Francis speaks during Angelus from the window at St Peter’s Square, at the Vatican (Vatican Media)

At the Angelus on Sunday, Pope Francis says “taking up the Cross” means imitating Jesus by expending our life in service to God and neighbour.

In Sunday’s Gospel, Jesus speaks to His disciples about the mystery of His Passion, Death, and Resurrection – a teaching, Pope Francis said, that the disciples are not yet able to understand, because their faith “is still immature, and too closely tied to the mentality of the world.”

The Pope said that for Peter and the other disciples – and for us too – the Cross is seen as “a ‘stumbling block’, whereas Jesus considers the ‘stumbling block’ [to be] escaping the Cross, which would mean avoiding the Father’s will.” This, the Pope said, is why Jesus rebukes Peter so strongly, saying to him, “Get behind me, Satan!”

In the Gospel, Jesus then immediately explains, “If any want to become my followers, let them deny themselves and take up their cross and follow me.”

Pope Francis said that in this saying, Jesus “indicates the way of the true disciple, showing two attitudes”: renouncing oneself, which means a real conversion; and taking up one’s cross, which “is not just a matter of patiently enduring daily tribulations, but of bearing with faith and responsibility that part of toil and suffering that the struggle against evil entails.”

Participating in the salvation of the world

Focusing on the latter, the Pope said, “Thus, the task of ‘taking up the cross’ becomes participating with Christ in the salvation of the world.”

Images of the Cross should be a “sign of our desire to be united with Christ through lovingly serving our brothers and sisters, especially the littlest and the weakest,” Pope Francis said; adding, “The Cross is the holy sign of God’s love and of Jesus’s sacrifice, and is not to be reduced to a superstitious object or an ornamental necklace.”

Instead, he explained, when we look at a crucifix, we should reflect on the fact that Jesus “has accomplished His mission, giving life, spilling His blood for the forgiveness sins.” In order to be His disciples, Pope Francis said, we in turn must “imitate Him, expending our life unreservedly for love of God and neighbour.”