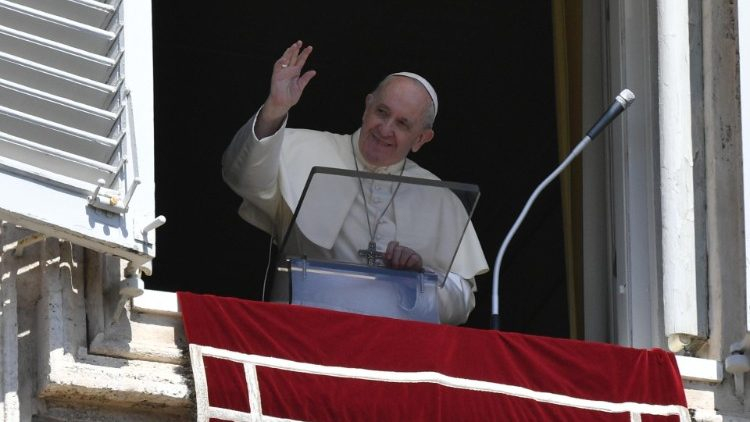 At the Angelus address on Sunday, Pope Francis says Jesus shows us that the path of perfection lies in trusting in Him and carrying out acts of charitable solidarity.

Ahead of the recitation of the traditional Marian prayer, Pope Francis reflected on the day’s Gospel (Mt 16:13-20), in which Peter professes his faith in Jesus as the Christ and the Son of God.

In the episode, Jesus asks the disciples about His identity, and leads them further in their relationship with Him.

“Indeed,” said the Pope, “the entirety of Jesus’s journey with those who follow Him, especially with the Twelve, is one of educating their faith.”

Hesitation in the face of Mystery

Jesus first asks the disciples who others say that He is. “Speaking of others is not so demanding,” said the Pope, “even though in this case the perspective of faith rather than gossip is already required.”

Then Jesus asks them: “But what about you?… Who do you say that I am?”

This second question, said Pope Francis, touches them to the core.

“At this point, we seem to perceive a moment of silence, as each one of those present is called to put themselves on the line, manifesting the reason why they follow Jesus,” he said. “Therefore, a certain hesitation is more than legitimate.”

Peter answers for the rest confidently. “You are the Messiah, the Son of the living God.”

His “complete and enlightening” answer, said the Pope, is the fruit of “a particular grace of the heavenly Father.”

And Jesus recognizes Peter’s prompt response to grace, praising his faith as the “unshakable ‘rock’ on which the Son of God wishes to build His Church.”

Who is Christ for me?

Pope Francis went on to remind the faithful that Jesus’s question is directed today to each one of us: “And you, who do you say I am?”

“It is a question of giving not a theoretical answer,” he said, “but one that involves faith, that is, life, because faith is life!”

Finding our own answer to Jesus’s question, said the Pope, requires us to listen to the Father’s voice within us, “and its consonance with what the Church, gathered around Peter, continues to proclaim.”

“It is a matter of understanding who Christ is for us: if He is the center of our life and the goal of our commitment in the Church and in society.”

The Holy Father then reflected on the relationship between charity and faith in Jesus.

Catholic communities, he said, should provide pastoral care to people who face various forms of poverty and crises. “Charity is always the high road of perfection.”

But, he added, works of solidarity cannot “divert us from contact with the Lord Jesus.”

“Christian charity is not simple philanthropy,” said the Pope. “On the one hand, it is looking at others through the eyes of Jesus Himself and, on the other, seeing Jesus in the face of the poor.”

“May Mary Most Holy, blessed because she believed, be our guide and model on the path of faith in Christ, and make us aware that trust in Him gives full meaning to our charity and to all our existence.”