Pope at Angelus: Immaculate Conception encourages us on path of conversion

Pope at Angelus: Immaculate Conception encourages us on path of conversion 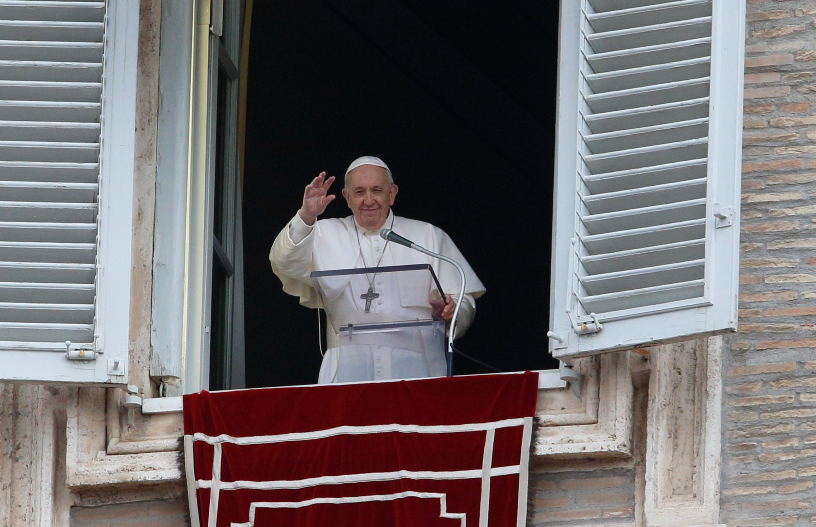 At the Angelus on the Solemnity of the Immaculate Conception, Pope Francis urges Christians to follow a path of conversion, as we find hope in the special grace Mary received from God.

Pope Francis prayed the Angelus on Tuesday, as the Church marks the feast of the Immaculate Conception of the Virgin Mary.

In his catechesis ahead of the Marian prayer, the Pope reflected on how Mary offers us a foretaste of the blessedness of eternal life.

“She too was saved by Christ,” he said, “but in an extraordinary way, because God wanted that the mother of His Son not be touched by the misery of sin from the moment of her conception.”

The Blessed Virgin Mary, added the Pope, was “free from any stain of sin” throughout her life, due to a “singular action of the Holy Spirit so as to always remain in perfect relationship with her Son Jesus.”

Pope Francis said every human being is created by God for the fullness of holiness, as St. Paul says in the Second Reading of the day’s liturgy (Eph 1:3-6, 11-12).

“What Mary had from the beginning, will be ours in the end,” he said, “after we have passed through the purifying ‘bath’ of God’s grace.”

‘The Lord is with thee’

The Pope said even the most innocent people were “marked by original sin and fought with all their strength against its consequences.”

He noted that the first person we are sure entered paradise was a “ruffian: one of the two who was crucified with Jesus.”

This, he said, is a sign that God’s grace is offered to everyone.

Pope Francis went on to warn Christians to “be careful”.

“It does not pay to be clever – to continually postpone a serious evaluation of one’s own life, taking advantage of the Lord’s patience.”

He said there is no time like the present to to seize the day.

‘Pray for us sinners’

We should do so, he noted, not in a worldly sense of enjoying every passing moment, but in a Christian sense.

“To say ‘no’ to evil and ‘yes’ to God, to once and for all stop thinking of ourselves, dragging ourselves into hypocrisy and to face our own reality as we are –this is who we are – to recognize that we have not loved God and neighbor as we should have.”

Once we have seized the opportunity of recognizing our failings, we should confess it, he said, in the Sacrament of Reconciliation and then seek to repair the harm we have done to others.

‘Now and at the hour of our death’

This difficult journey of conversion, concluded Pope Francis, is our path for becoming “holy” and “immaculate”.

“The uncontaminated beauty of our Mother is incomparable, but at the same time it attracts us,” he said. “Let us entrust ourselves to her and say ‘no’ to sin and ‘yes’ to Grace once and for all.”