Pope at Angelus: May Our Whole Life Be a “Yes” to God

Pope at Angelus: May Our Whole Life Be a “Yes” to God 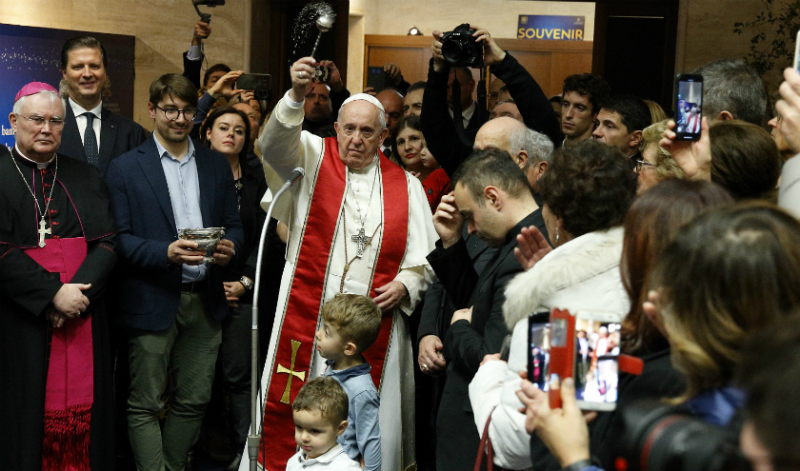 The Blessed Virgin Mary, conceived without sin and full of grace, is at the centre of today’s feast. In his reflection before the Angelus, the Pope highlights all her beauty: a masterpiece even in her humility, capable of making room for God without complacency and ready to put herself at the service of others. May she be a model of our communities and of our life.

The Solemnity of the Immaculate Conception of Mary – “celebrating the singular grace and privilege granted by God” by which the Mother of God “was preserved free from all stain of original sin” from the first moment of her conception – was the focus of Pope Francis’ reflections at the Angelus on the Second Sunday of Advent.

This feast, he said, is found in Advent, a time of waiting and expectation; but in the case of Mary, he explained, God’s will has already been done, as Mary was preserved “from the contamination of evil that is the common legacy of the human family.”

Trust in God’s Will

Turning to the Gospel, which recounts the story of the Annunciation, Pope Francis said that God thought of Mary and wanted her “from the beginning”. But, he said, in order to be “full of grace”, to be filled with God’s love, it is necessary to listen to God’s Word and trust totally in His will, as Mary did.

Mary, the Pope said “does not lose herself in logical arguments, she does not place obstacles in the Lord’s way, but she promptly entrusts herself and leaves room for the action of the Holy Spirit”. Corresponding perfectly to God’s plan for her, “Mary becomes ‘all beautiful’, ‘all holy’, but without the slightest shadow of self-satisfaction”. That is, she remains “humble, small, poor”.

An Attitude of Service

Pope Francis then emphasized “the word with which Mary defines herself in her surrender to God”. “Mary’s ‘yes’ to God”, the Pope said, assumes from the beginning the attitude of service, of attention to the needs of others”, as seen in Mary’s visit to Elizabeth. “Openness to God is found in the openness to take on the needs of one’s neighbor”. Moreover, he emphasized, this is done without “noise or ostentation… because charity and works of mercy do not need to be exhibited as a trophy”.

Making Our Whole Life a ‘Yes’ to God

Pope Francis concluded his reflection with the prayer that the feast of the Immaculate Conception might “help us to make our whole life a ‘yes’ to God, a ‘yes’ made of adoration of Him and of daily gestures of love and service”.