Pope at Angelus: Open your eyes to God’s humble presence

Pope at Angelus: Open your eyes to God’s humble presence 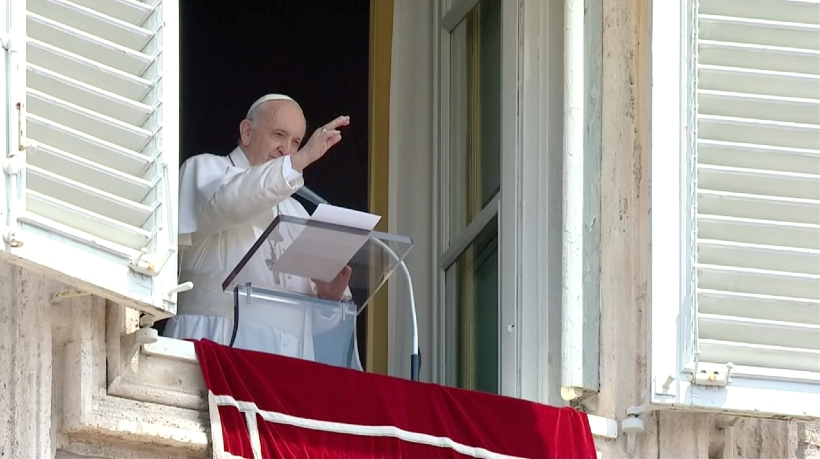 Pope Francis calls on us to keep our eyes and hearts free of prejudice and closed mindedness that comes from habit. Be open to being amazed at God’s surprises, he says, and God’s “humble and hidden presence in daily life”.

Before leading the recitation of the Angelus, Pope Francis offered reflections on the Sunday Gospel reading which recounts when Jesus began to teach in the synagogue of his home town of Nazareth and the reaction of those present who questioned how he could have such wisdom coming from a humble family, the son of a carpenter. Their reaction was one of disbelief and resentment to which Jesus responded: “A prophet is not without honour, except in his own country, and among his own kin, and in his own house” (Mk 6:4).

This attitude of Jesus’s fellow villagers reflected how they thought they knew Jesus, but they did not recognise him. The Pope observed that the difference between knowing and recognising is something we need to all be aware of or we risk thinking we know everything about a person, when in reality our knowledge is superficial and we need to be open to learning more to “recognise the uniqueness of the person”. In the worst case, we can start labeling others and become closed within or own prejudices, he noted, as the villagers who knew Jesus for thirty years did by not realising who Jesus truly was and refusing to appreciate what was new about Jesus.

The Pope warned that if we let the ease of habit take over in us, it can lead to a “dictatorship of prejudice” where we close ourselves to novelty and the possibility of being amazed. We see this in our daily lives when we gravitate toward experiences or people who only conform to our ideas and world view, he noted. This can affect us in our faith life as well, where we can think we know everything about Jesus and have it all figured out. The Pope warned, however, that “without openness to what is new and to God’s surprises, without amazement, faith becomes a tiring litany that slowly dies out”. He underscored the importance of allowing ourselves to be amazed, which is the natural reaction to a true encounter with the Lord.

The scandal of the Incarnation

Returning to Mark’s Gospel, the Pope said the reason Jesus’s fellow villagers did not recognise him was because “they did not accept the scandal of the Incarnation”. For them, he noted, it would be scandalouos to think that the immensity of God should appear in the smallness of our human condition, that “the divine should be hidden in the human” with the words and gestures of an ordinary man and simple life situation. Here too, he observed, we might be more easily attracted to the idea of a distant god who is up in his world and we in our world or also a “special effects” god who does extraordinary things, provoking strong emotions. The Pope said we too need to be aware of falling into this way of thinking and to learn to see that “God incarnated Himself: God is humble, God is tender, God is hidden, he draws nears to us, living the normality of our daily life”. The Pope said Jesus is our companion. He became one of us and therefore understands us, accompanies us, forgives us and loves us so much.

In conclusion, Pope Francis called on us to pray that we, like Mary, may welcome the mystery of God in our daily life and have “eyes and hearts free of prejudices and open to being amazed at God’s surprises, at His humble and hidden presence in daily life.”