Pope at Angelus: With God, sin does not have the last word

Pope at Angelus: With God, sin does not have the last word 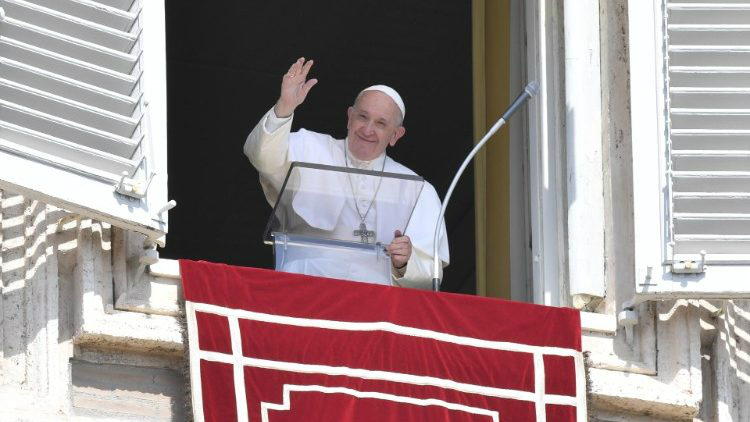 At the Angelus in St Peter’s Square on Sunday, Pope Francis says that we must never be afraid, as God has “infinite love for us sinners” and that through His forgiveness, evil can be defeated.

Before the recitation of the Marian prayer, the Pope recalled the Sunday Gospel, in which Jesus is criticized for being “in the company of tax collectors and sinners”, with the phrase “He welcomes sinners and eats with them”.

The Pontiff commented that this is actually a “great announcement”, because Jesus does exactly that: he “welcomes sinners and eats with them”. This is a phrase, said the Pope, that could be written on the doors of our Churches, as he explained that “at every Mass, in every Church: Jesus is happy to welcome us at his table, where he offers himself to us”.

Faced with those who criticize him, said the Pope, “the Lord recounts three parables which show his predilection for those who feel far from him”.

In the first parable, noted Pope Francis, Jesus asks ‘who among you, if he has a hundred sheep and loses one, does not leave the ninety-nine in the desert to go in search of the lost one?’.

However, God, continued the Pope, “does not resign himself.” For him, those who have not yet known the beauty of his love are “at the centre of his heart”.

The second parable recounts the story a of a lady who loses one of her ten coins.

“You”, said Pope Francis “are that little coin that the Lord does not resign himself to losing, and seeks relentlessly”. Because, he explained, the Lord wants to tell you that you are “unique”.

In the third parable “the Father awaits the return of the Prodigal son”. God, said Pope Francis, “awaits us, does not tire, does not lose heart.” Even if you think you have done many horrible things, said the Pope, “do not be afraid”. God does not get tired, because “we are that reunited son, that rediscovered coin, that caressed sheep…”

Pope Francis went on to explain that God waits for us to accept his infinite love. He continued, saying this infinite love, at times, “can be rejected”. This is precisely what the eldest son does in the parables, said Pope Francis. He imagines God as a “master” rather than as a “Father”; a “rigorous” God rather than a “merciful” one. “No”, said the Pope, “God saves with love, not with force. He proposes himself but does not impose himself”.

At times, said Pope Francis, we too are mistaken, when, like the eldest son, “we believe ourselves to be right” and think that it is others who are bad.

Let us “not believe ourselves to be good” said Pope Francis. “Because alone, without the help of God, who is good, we do not know how to overcome evil”.

Finally, the Pope asked, so how do we defeat evil? “By accepting God’s forgiveness”, he replied. “God cancels out evil”, he said, concluding that “with God, sin does not have the last word”.