Pope at Audience: An evangelizer should not impede God’s creativity

Pope at Audience: An evangelizer should not impede God’s creativity 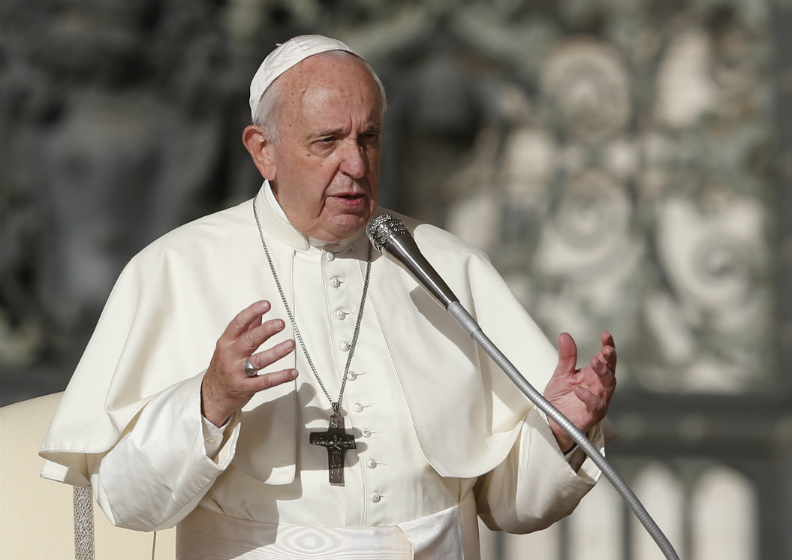 Pope Francis in his General Audience of Wednesday, focuses on the experience of St. Peter in the Acts of the Apostles to urge Christians to allow themselves to be amazed by God’s surprises and creativity with which He makes Himself known as the “Lord of all”.

The starting point of Pope Francis’ catechesis was the experience of St. Peter in the Acts of the Apostles, where he has a vision of a large tablecloth with four-legged animals, reptiles and birds descending from above and a voice asking him to eat their meat. As a good Jew, Peters abstains from eating anything impure. But the voice repeats: “What God has made clean, you are not to call profane.”

Looking beyond, to the heart

The Pope explained that through this episode, God wants Peter not to evaluate and categorize events and people as pure and impure, but to learn to go beyond, to look at the person and the intentions of his or her heart. In this regard, Jesus says that what makes man impure does not come from outside but only from within, from the heart.

After this vision, God sends Peter to the house of Cornelius, a non-Jew who is God-fearing and religious, given to works of charity and prayer. In that house of pagans, Peter preaches Christ and the forgiveness of sins to anyone who believes in Him. Cornelius and his family who are filled with the Holy Spirit are baptized by Peter in the name of Christ.

Meanwhile, other Christians in Jerusalem scandalized by Peter’s behaviour, reproach him severely because it was against the custom and the law. But after his encounter with Cornelius, Peter is freer from himself and in greater communion with God and with others, because he saw God’s will in the action of the Holy Spirit.

The Pope said that this event marks a decisive turning point in Peter’s life and his vision is a divine “provocation” that brings about a change of mentality in him. Peter realizes that God’s choice of Israel as His people is not based on their merits but is the sign of the gratuitous call to be the mediation of the divine blessing among pagan peoples.

Pope Francis said that from Peter we learn that an evangelizer cannot be an impediment to the creative work of God, who “wills everyone to be saved”, but one who fosters the encounter of hearts with the Lord. This episode, he said, questions our behaviour especially with our brothers and sisters, especially non-Christians, whether we hinder or facilitate their encounter with the Father.

The journey of the Gospel in the world, the Pope said, is accompanied by the supreme creativity of God which manifests itself in surprising ways. Christians, he said, need to overcome particularism and open themselves to the universality of salvation, because God wants to save everyone. They are called to come out of themselves and open themselves up to others, to live close together which transforms every interpersonal relationship into an experience of fraternity.

The Holy Father concluded his audience urging Christians to ask for the grace to allow themselves to be surprised by God’s surprises, without hindering His creativity, but to recognize and encourage the ever new ways by which the Risen Christ pours out His Spirit into the world and attracts hearts, making Himself known as the “Lord of all”.