Pope at Audience: Contemplative prayer ‘a guide along path of love’

Pope at Audience: Contemplative prayer ‘a guide along path of love’ 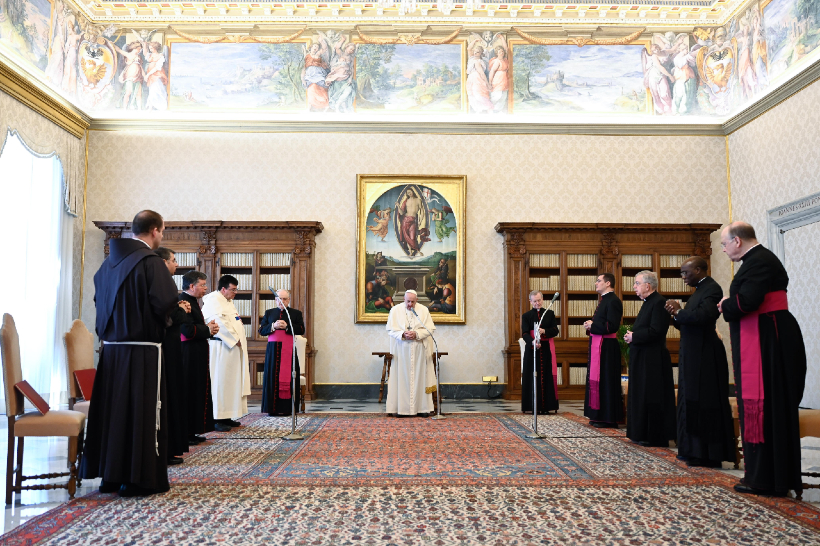 At the Wednesday General Audience, Pope Francis focuses his catechesis on contemplative prayer, and says contemplation helps guide us in following Jesus along the path of love.

He said every human person has a “contemplative dimension” which is like salt that gives flavor to our day. We can contemplate birds chirping, the sun rising, or art and music.

“To contemplate is not primarily a way of doing, but a way of being,” said the Pope.

Yet, added Pope Francis, the contemplative aspect of our nature requires us to enter into faith and love before it can become prayer.

“Being contemplatives does not depend on the eyes, but on the heart,” he noted. “And here prayer enters into play as an act of faith and love, as the ‘breath’ of our relationship with God.”

The Pope said prayer purifies our heart and sharpens our gaze, “allowing it to grasp reality from another point of view.”

Citing the Holy Curé of Ars, he said “contemplation is a gaze of faith, fixed on Jesus.”

“Everything comes from this: from a heart that feels that it is looked on with love. Then reality is contemplated with different eyes.”

Referring again to St. John Vianney, Pope Francis said loving contemplation of Christ requires few words and can be put simply: “I look at Him and He looks at me!”

“A gaze is enough,” said the Pope. “It is enough to be convinced that our life is surrounded by an immense and faithful love that nothing can ever separate us from.”

Jesus, he added, was the master of this gaze, always finding time and space to be in loving communion with God the Father.

Pope Francis then warned against falling into the ancient temptation of thinking contemplation is opposed to action. He said some spiritual masters of the past advocated this dualistic understanding of prayer.

“In reality, in Jesus Christ and the Gospel, there is no opposition between contemplation and action,” said the Pope.

He said the only great call in the Gospel is to follow Jesus along the path of love.

“This is the pinnacle and centre of everything. In this sense, charity and contemplation are synonymous; they say the same thing.”

Pope Francis concluded his catechesis recalling a teaching from St. John of the Cross, one of the Church’s greatest mystics and masters of contemplative prayer.

“A small act of pure love is more useful to the Church than all the other works combined,” said the Pope. “What is born of prayer and not from the presumption of our ego, what is purified by humility, even if it is a hidden and silent act of love, is the greatest miracle that a Christian can perform.”