Pope at Audience: Jesus the model of prayer for His disciples

Pope at Audience: Jesus the model of prayer for His disciples 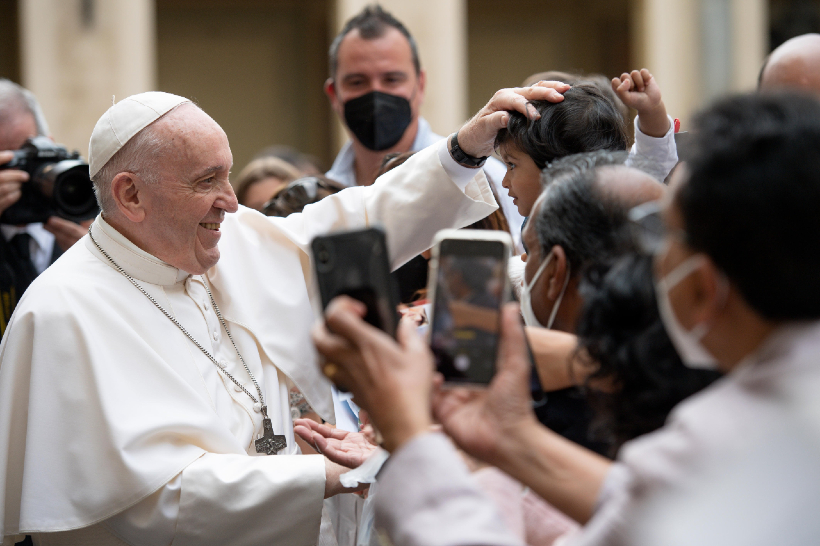 Pope Francis continues his catechesis on Christian prayer at the Wednesday General Audience, and explains that prayer was fundamental in Jesus’ relationship with His disciples.

Pope Francis picked out a few examples from the Gospel to explain that prayer was fundamental in Jesus’ relationship with His disciples.

Before choosing His disciples, Luke says, Jesus went up the mountain to pray and spent the whole night praying to God. At daylight, He chose His disciples naming them apostles. Prayer, which is dialogue with the Father, the Pope said, is the criterion of this choice, which many not appear to be the best ones, especially with regard to Judas, the future traitor. But the Pope said that the names of the disciples were written in God’s plan.

The Pope pointed out that the apostles are at times a cause of concern for Jesus, but He carries them in His heart even in their errors and when they fall because He receives them from the Father. Hence, prayer for them continually reappears in Jesus’ life.

As a teacher and friend, the Holy Father continued, Jesus waits patiently for the conversion of the disciple, as is evident with Peter at the Last Supper. Jesus tells Peter He has prayed that his faith may not fail and when he is converted, he should confirm his brothers. “Jesus’ love during the time of the weakness of His disciple does not cease, but rather becomes more intense, and we are at the centre of His prayer.”

Again, Jesus was in a solitary place praying, when He wanted to verify the faith of His disciples. When He asked them who they thought He was, Peter answered, “The Christ of God.”

“The great turning points of Jesus’ mission,” the Pope said, “are always preceded by intense, prolonged prayer.” This test of faith is “a renewed starting point for the disciples”, because from then on, the Holy Father said, Jesus took on a new tone in His mission, speaking openly to them of His passion, death and resurrection.

At this moment of the announcement of His end, which instinctively arouses repulsion in His disciples and in us, the Pope said, “prayer is the only source of light and strength”.

“It is necessary to pray more intensely every time the road takes a turn uphill.”

Soon after speaking about His lot in Jerusalem, the episode of the Transfiguration takes place.

Luke says that Jesus took Peter, John and James up the mountain to pray, when His face changed in appearance and His garment became white and radiant. Moses and Elijah in their glory were conversing with Jesus about His departure which was to accomplish in Jerusalem.

“Therefore,” the Pope explained, “this anticipated manifestation of the glory of Jesus took place in prayer, while the Son was immersed in communion with the Father and fully consented to His will of love, to His plan of salvation.”

And out of that prayer came a clear word for the three disciples involved: “This is my Son, the chosen one; listen to Him”.

Thus, the Pope said, Jesus not only wants us to pray as He prays, but assures us that, even if our attempts at prayer are completely vain and ineffective, we can always count on His prayer.

He urged Christians to repeat and memorize that Jesus always prays for us. “When there is some difficulty, when you are in the orbit of distractions: Jesus is praying for me,” he said adding, Jesus Himself has said it. “Let us not forget that what sustains each one of us in life is Jesus’ prayer for each one of us, with name, surname, before the Father, showing Him the wounds that are the price of our salvation.

In conclusion, Pope Francis said that “even if our prayers were only stutterings, if they were compromised by a wavering faith, we must never cease to trust in Him”.

“Supported by the prayer of Jesus, our timid prayers rest on eagle wings and soar to Heaven,” concluded the Pope.