Pope at Audience: Love is mystical root of believer’s life

Pope at Audience: Love is mystical root of believer’s life 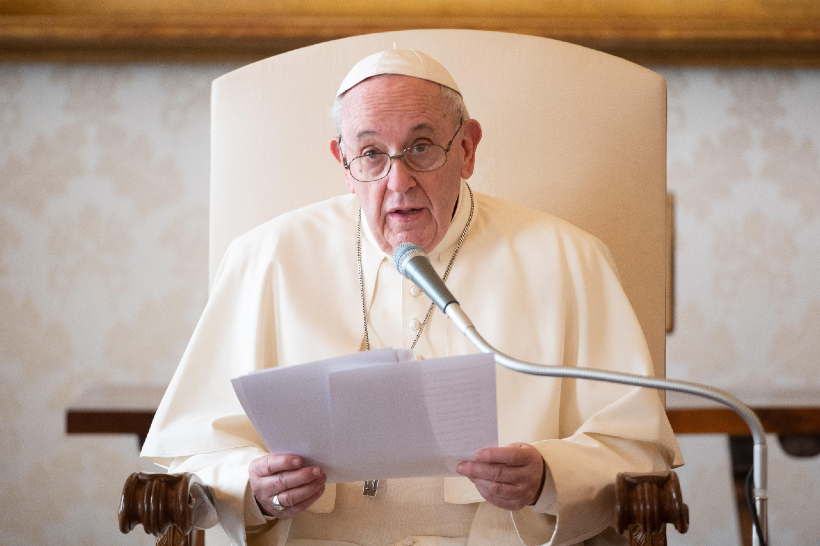 At the General Audience on Wednesday, Pope Francis turned his gaze to the prayer life of the early Church, as he continued his catechesis on prayer.

“The Church’s first steps in the world were interspersed with prayer,” the Pope said. The writings of the New Testament, and especially the Acts of the Apostles, give us “the image of an active Church on the move, yet which gathered in prayer finds the basis and impulse for missionary action.”

Prayer, the driving force of evangelization

The Holy Father pointed out four essential characteristics of ecclesial life, drawn from St Luke’s account in the book of Acts: “listening to the Apostle’s teaching” which involves preaching and catechesis; the continual quest for fraternal communion; the “breaking of the bread,” the Eucharist, which is the Sacrament of Jesus’ presence among us; and prayer, “which is the space of dialogue with the Father through Christ in the Holy Spirit.”

Anything that arises outside of those “coordinates,” the Pope warned, “is deprived of a foundation… deprived of ecclesiality.” When these four characteristics are present, however, it is a guarantee of the Holy Spirit.

Pope Francis said that reading the Acts of the Apostles, “we then discover what a powerful driving force of evangelization the prayer gatherings can be.” In prayer, he explained, we experience Christ’s presence among us “and are touched by the Spirit.”

The Pope quotes the Catechism: “The Holy Spirit … keeps the memory of Christ alive in his Church at prayer, also leads her toward the fullness of truth and inspires new formulations expressing the unfathomable mystery of Christ at work in his Church’s life, sacraments, and mission.” This, Pope Francis explained, “is the Spirit’s work in the Church: making us remember Jesus.”

He insisted, however, that this is not simply a question of recalling facts. Instead, “Christians, walking on the paths of mission, remember Jesus while they make Him present once more; and from Him, from His Spirit, they receive the ‘push’ to go, to proclaim, to serve.”

Prayer, the Pope said, “immerses” Christians in God’s love for each and every person and provides the missionary impulse to preach the Gospel to every human person. “God is God for everyone,” the Pope said, “and in Jesus every wall of separation has definitively crumbled.”

The exchange of love – God’s love for us, and the love He asks in return – is “the mystical root of the believer’s entire life,” Pope Francis said. And, both for the early Christians and for Christians today, prayer enables us to live that experience. Through prayer, the Pope continued, every Christian can make his own the words of St Paul: “the life I now live in the flesh I live by faith in the Son of God, who loved me and gave himself for me.”

Pope Francis said it is “only in the silence of adoration” that “we experience the full truth of these words… And this prayer is the living flame of the Spirit that gives strength to witness and mission.”