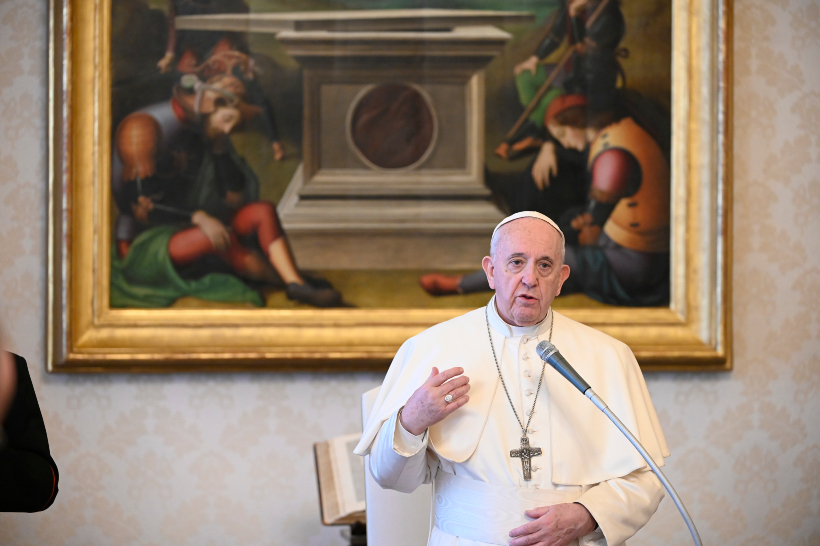 Pope Francis dedicates his catechesis during his Wednesday General Audience to the seventh beatitude, “Blessed are the peacemakers, for they shall be called sons of God”.

True inner tranquility flows from “the peace of Christ that comes from His Cross and generates humanity anew.”

Those were the Pope’s words on Wednesday during his Weekly General Audience livestreamed from the Vatican Library.

In order to understand this seventh Beatitude, ‘blessed are the peacemakers’ noted Pope Francis, “the word peace needs to be explained, because it can be misunderstood or become meaningless.”

Focusing on two ideas of peace, the Pope said that one kind can be seen in the biblical term ‘Shalom’, which signifies an abundant, or flourishing life.  A second idea, he commented, is the modern notion of interior serenity.  But Pope Francis underlined that this second type of peace is incomplete since spiritual growth often occurs precisely when one’s tranquility has somehow been disturbed.

The peace of Christ

“We must remember” underlined the Pontiff, “that the Lord means that His peace is different from that of the human one.

The peace of Christ, he explained, is a fruit of his Death and Resurrection. The Pope went on to say that the Lord bestows his gift not as the world does, where ‘peace’ is often purchased at the expense of others, but by destroying hostility in his own person.

“We have to at least suspect that in the globalized context, composed primarily of economic interests, the ‘peace’ desired by some corresponds to the ‘war’ of others. This is not the peace of Christ”, the Pope said.

Pope Francis stressed that the path to accomplish this peacemaking is Jesus’ body. “He, in fact, reconciles all things and makes peace with the blood of His cross.”

Who are the “peacemakers”, then? The Pope answered this question by saying that they are people “who have learned the art of peace and practice it, they know that there is no reconciliation without the gift of one’s life, and that peace must be sought always and in every case”. Those who do this, he said, are true children of God and show us the way of true happiness.