Pope at Audience: vocal prayer is a sure way to speak with God

Pope at Audience: vocal prayer is a sure way to speak with God 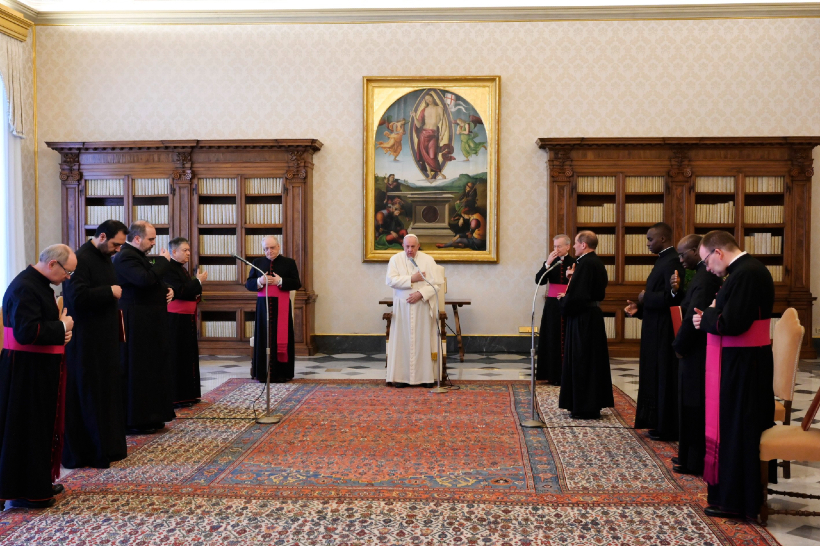 Pope Francis reflects on the importance of vocal prayer in his catechesis during Wednesday’s General Audience.

For human beings, he continued, “prayer becomes word, invocation, hymn, poetry… The divine Word is made flesh, and in the flesh of every person the word returns to God in prayer.”

The importance of words

The Holy Father’s catechesis began with a reflection on words, which not only proceed from us, but also “to some extent shape us.” In the Bible, words bring everything to light, ensuring that “nothing human is excluded, censored.”

That, said Pope Francis, “is why Sacred Scripture teaches us to pray, sometimes even with bold words.” The human authors of the Bible are intent upon showing humanity as it really is, to the point even of including “harsh expressions against enemies… words that belong to human reality and which find their way into the Sacred Scriptures.”

They are included, the Pope explained, “to testify to us that if, in the face of violence, there are no words to make bad feelings harmless, to channel them so they do no harm, then the world would be overwhelmed.”

The surest way to pray to God

While recognizing that prayer does not consist in simply repeating words without meaning, he nonetheless insisted that vocal prayer is the “surest” means of speaking with God. Feelings, he said, can be uncertain and unpredictable, as can the graces that come from prayer. At times, the mysterious “prayer of the heart” can be lacking.

Vocal prayer, however, “can always be practiced” and is necessary, even when our feelings are confused.

“We should all have the humility of certain elderly people who, in church… recite softly the prayers they learned as children,” Pope Francis said. “That prayer does not disturb the silence, but testifies to their fidelity to the duty of prayer practised throughout their lives, without fail.”

These “practitioners of humble prayer,” he said, “are often the great intercessors of our parishes.”  They too, like all of us, sometimes face dark nights, and “empty moments.” But, the Pope said, “one can always remain faithful to vocal prayer.”

Therefore, Pope Francis concluded, “we must not despise vocal prayer,” which is the only “sure” way “to direct to God the questions He wants to hear.”