Pope at Audience: We are never alone if we bring our lives to God in prayer

Pope at Audience: We are never alone if we bring our lives to God in prayer 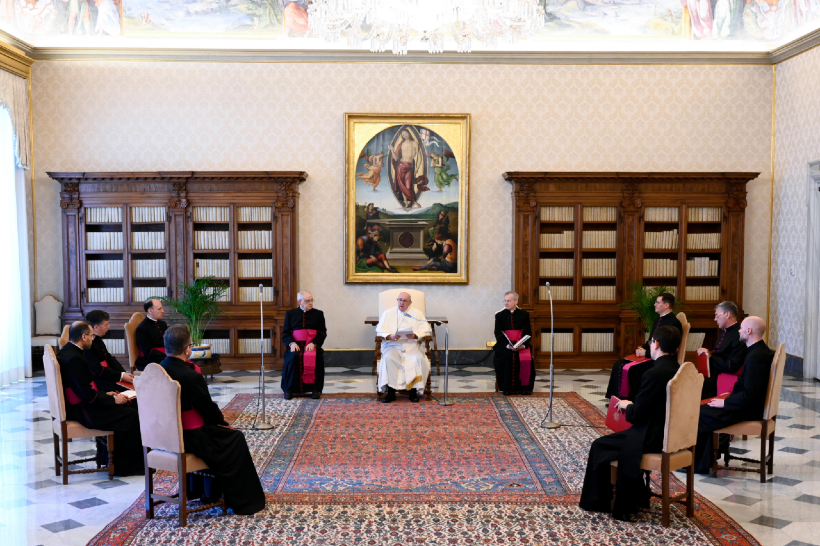 At the weekly General Audience, Pope Francis reflects on how King David prayed while shepherding God’s people with his poet’s soul.

Pope Francis focused his catechesis at the Wednesday General Audience on the Biblical figure of King David.

“Favored by God even from his youth, he is chosen for a unique mission that would play a central role in the history of the people of God and in our own faith.”

Jesus, said the Pope, is called “son of David” and fulfilled the ancient promises of “a King completely after God’s heart, in perfect obedience to the Father.”

David’s own story, said Pope Francis, begins in Bethlehem, where he shepherds his father’s flock.

“He worked in the open air: we can think of him as a friend of the wind, of the sounds of nature, of the sun’s rays.”

The Pope said David is first of all a shepherd. He defends others from danger and provides for their sustenance. In this line, Jesus called Himself “the good shepherd”, who “offers His life on behalf of the sheep. He guides them; He knows each one by name.”

Later in life, when David goes astray by having a man killed in order to take his wife, he immediately understands his sin when the prophet Nathan reproves him.

“David understands right away that he had been a bad shepherd,” said the Pope, “that he was no longer a humble servant, but a man who was crazy for power, a poacher who looted and preyed on others.”

With a poet’s soul

Pope Francis went on to reflect on what he called David’s “poet’s soul”.

“He has only one companion to comfort his soul: his harp; and during those long days spent in solitude, he loves to play and to sing to his God.”

David, said the Pope, was not a vulgar man. He often raised hymns to God, whether to express his joy, lamentation, or repentance.

“The world that presented itself before his eyes was not a silent scene: as things unraveled before his gaze he observed a greater mystery.”

Prayer, said Pope Francis, arises from “the conviction that life is not something that takes us by surprise, but a stupefying mystery that inspires poetry, music, gratitude, praise, even lament and supplication in us.”

Biblical tradition, he noted, holds that David was the great artist behind the composition of the Psalms.

David, said the Pope, dreamed of being a good shepherd. He was many things: “holy and sinful, persecuted and persecutor, victim and murderer.”

Like him, events in our own lives reveal us in a similar light. “In the drama of life, all people often sin because of inconsistency.”

Bringing everything to God

Pope Francis said that, like David, there is one golden thread that runs through all our lives: prayer.

“David teaches us to let everything enter into dialogue with God: joy as well as guilt, love as well as suffering, friendship as much as sickness,” he said. “Everything can become a word spoken to the ‘You’ who always listens to us.”

“This is the power of prayer in all those who make space for it in their lives,” he said. “Prayer makes us noble: it is capable of securing their relationship with God who is the true Companion on the journey of every man and woman, in the midst of life’s thousand adversities.”