Pope at Audience: We can always praise God, whose love never fails

Pope at Audience: We can always praise God, whose love never fails 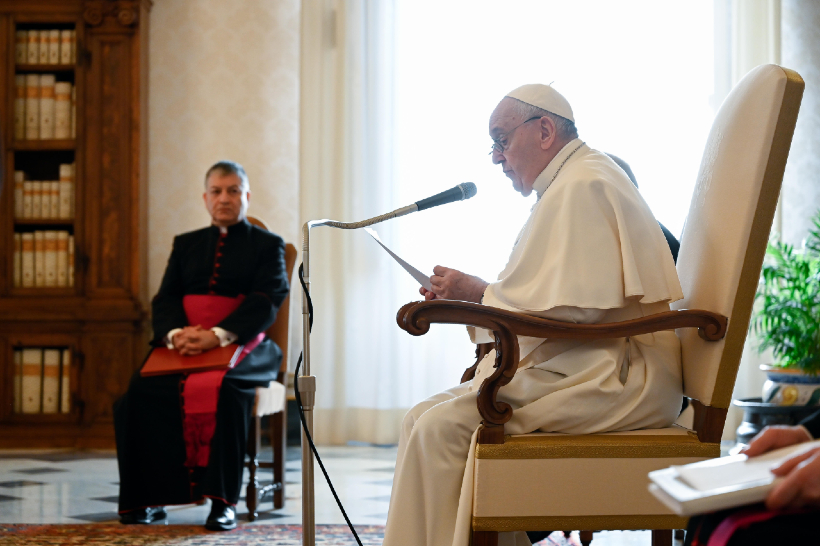 Continuing his catechesis on prayer at the Wednesday General Audience, Pope Francis reflects on “the prayer of praise”, which is possible in every circumstance because God is always faithful.

Pope Francis reflected on the dimension of praise in prayer, at the General Audience on Wednesday, taking as his starting point “a critical moment in the life of Jesus.”

At the beginning of His ministry, when He had already begun to preach the Kingdom of God and perform miracles, “the mission of the Messiah goes through a crisis,” the Pope said: John the Baptist expresses doubts, while the people to whom He had preached showed hostility to Jesus and His message.

But “precisely in this disappointing moment,” Pope Francis said, “Jesus does not lift up a lament to the Father, but rather a hymn of jubilation… in the midst of a crisis, Jesus blesses the Father, He praises Him.”

God is praised for Who He is

Jesus praises God for Who He is, calling upon Him as “Father, Lord of heaven and earth.” Jesus acknowledges His Father as Lord of the universe, and conversely recognizes “the Lord of all that exists,” as His Father. “Praise springs from His experience of feeling the He is ‘Son of the Most High’,” the Pope said.

God favours the little ones

In His prayer, Jesus goes on to praise God “for favouring the little ones.” Pope Francis explained that in His ministry, Jesus saw those who were considered “wise” and “learned” react to His preaching with suspicion, while the “little ones” were open to His message. “This can only be the will of the Father,” the Pope said, “and Jesus rejoices in this. We too must rejoice and praise God because humble and simple people welcome the Gospel.”

Jesus’ prayer of praise “in that moment of seeming failure” leads us to see our own failures in a different light, Pope Francis continued. He explained that praising God, especially “when it seems evil prevails and there is no way to stop it,” is necessary, not for God’s sake, but for our own.

Praising God in times of trial

The Pope cited the catechism, which says that the prayer of praise “shares in the blessed happiness of the pure of heart who love God in faith before seeing Him in glory.”

Paradoxically, he said, it is not only at times of happiness, when we feel blessed, but especially “in difficult moments” that we must praise God – precisely, so that, rising up to God, we will be able “to see a new panorama, a broader horizon.”

The example of the Saints

Saint Francis, in his Canticle of the Creatures – Laudato sí – offers an excellent example of praising God in time of difficulties.

The prayer was composed at the end of Francis’ life, when he was beset by difficulties. Yet in that moment, Pope Francis said, the saint “praises God for everything, for all the gifts of creation, and even for death, which he courageously manages to call ‘sister’.”