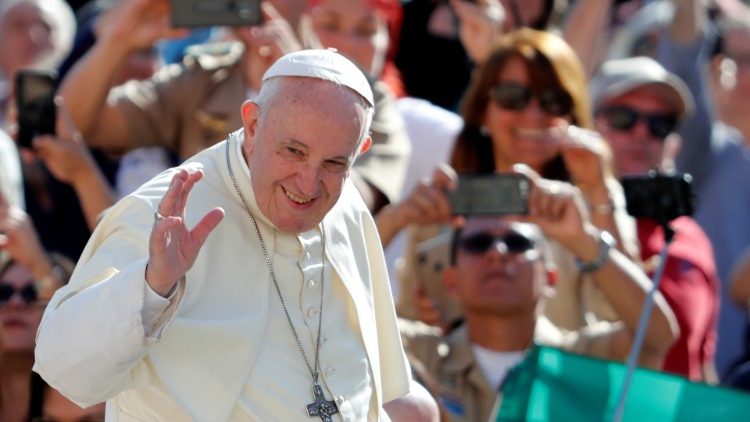 Pope Francis at the General Audience of 11 September in the Vatican.

Pope Francis reflected on his just-concluded Apostolic Journey to Mozambique, Madagascar and Mauritius, saying as a pilgrim of peace and hope, he tried to bring the leaven of Jesus to the people of the three countries.

In his catechesis during Wednesday’s General Audience in the Vatican, Pope Francis recalled the various events of his memorable to Mozambique, Madagascar and Mauritius, 4-10 September.

“I thank God who has allowed me to complete this journey as a pilgrim of peace and hope,” the Pope said, adding, “Christ is the hope of the world, and His Gospel is the most powerful leaven of brotherhood, freedom, justice and peace for all peoples.”  He said that with his visit, in the footsteps of the holy evangelizers, he tried “to bring this leaven, the leaven of Jesus, to the people of Mozambique, Madagascar and Mauritius”.

The Pope said he went to “sow seeds of hope, peace and reconciliation” in Mozambique, “a land that has suffered so much in the recent past because of a protracted armed conflict, and that last spring was hit by two devastating cyclones.  The local Church, he said, “continues to accompany the peace process, which took a step forward on 1 August with a new Agreement between the parties”. In this regard, the Pope particularly thanked the Community of Sant’Egidio, a lay Catholic group, which, he said worked very hard in this peace process.

The Pope encouraged the authorities of the country on the path of peace, “urging them to work together for the common good”. “And I encouraged the young people, who have gathered from different religious backgrounds, to build the country, overcoming pessimism and anxiety, spreading social friendship and building on the traditions of the elderly.”

In his encounter with Mozambican bishops, priests and consecrated persons in the Cathedral of the Immaculate Conception in Maputo, the Pope said he proposed to them the “way of Nazareth, the way of the generous “yes” to God, in the grateful memory of her call”.

A strong sign of this evangelical presence, he said, is the Hospital of Zimpeto, on the outskirts of Maputo, that the Community of Sant’Egidio helped build. He said the important thing there was that everyone works for the sick who belong to various religious faiths. The director of the hospital is a Muslim woman specialized in AIDS and all work together as brothers for the sick.

The culminating Mass in Mozambique in a stadium was a joyous event with songs and dances, despite the rain. And the message of the Lord that echoed loud at the Mass was, “Love your enemies” (Lk 6:27), which the Pope said, is the “seed of the true revolution, that of love, which extinguishes violence and generates brotherhood”.

In Antananarivo, the capital of Madagascar, the Pope found a country rich in beauty and natural resources but marked by much poverty.

Animated by their traditional spirit of solidarity, the Malagasy people, the Pope said, can overcome adversity and build a future of development by combining respect for the environment and social justice.

“As a prophetic sign in this direction,” the Holy Father said he visited Akamaso, the “City of Friendship”, where they try to combine work, dignity, care for the poor and education for children, in the spirit of the Gospel. There, at the granite quarry, the Pope prayed for the workers.

The Pope also met the contemplative nuns of different congregations in the Carmelite monastery, to underscore the fact that without faith and prayer one cannot build a city worthy of man.

In his encounter with bishops of the country, they renewed their commitment to be “sowers of peace and hope”, in caring for God’s people, especially the poor, and their priests. Together with the bishops, the Pope venerated the Blessed Victoire Rasoamanarivo, the first Malagasy woman to be elevated to the altars. In also joined an evening vigil with young people, full of testimonies, songs and dances.

In Antananarivo, the Pope celebrated Sunday Mass in the vast “Diocesan Field” with a large crowd, and later met Madagascar’s priests, consecrated women and men and the seminarians calling it “an encounter as a sign of praise to God”.

Monday was dedicated to Mauritius, a well-known tourist destination, which the Pope chose to visit as a “place of integration between different ethnic groups and cultures”. The Pope noted a strong inter-religious dialogue and friendship between the various faith communities. An example of this is that when he entered the bishop’s house, he found a beautiful bouquet for him sent by the Great Imam as a sign of brotherhood.

The Holy Mass in Mauritius was celebrated in memory of Blessed Jacques-Désiré Laval, known as the “apostle of Mauritian unity”. “The Gospel of the Beatitudes, the identity card of Christ’s disciples, in that context,” the Pope said, “is an antidote to the temptation to selfish and discriminatory well-being. It is also the leaven of true happiness, imbued with mercy, justice and peace.

The Pope said he was struck by the work of evangelization by the bishops for the poor. In his meeting with the country’s authorities, the Pope appreciated their commitment to harmonize differences as a common enterprise and encouraged them to continue in their efforts to welcome people even today and maintain and develop their democratic life.

The Pope said that before and after every foreign apostolic visit, he always goes to Our Lady in the Basilica of St Mary Major in Rome, praying that she accompany him on his journey like a Mother, telling him what to do and say. “With Our Lady, I am safe,” he said.

In conclusion, Pope Francis urged those present to thank God and ask Him that the seeds sown in this apostolic journey may bring abundant fruit for the peoples of Mozambique, Madagascar and Mauritius.