Pope at General Audience: Love the world that persecutes you

Pope at General Audience: Love the world that persecutes you 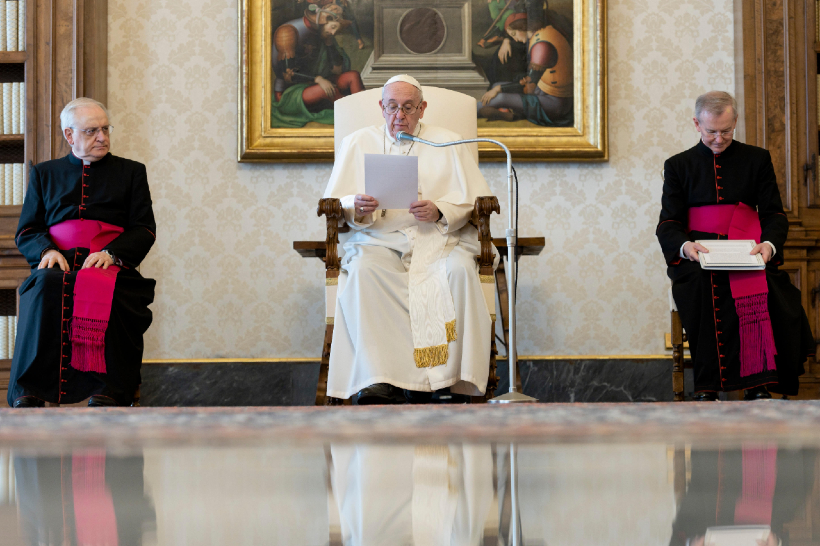 At his General Audience on Wednesday, Pope Francis concludes his series of catecheses on the Beatitudes, focusing on the final Beatitude, “Blessed are those who are persecuted for righteousness’ sake, for theirs is the kingdom of heaven”.

Pope Francis concluded his catechesis on the Beatitudes during his General Audience on Wednesday, 29 April. His reflection focused on the last of the Beatitudes: “Blessed are those who are persecuted for righteousness’ sake, for theirs is the kingdom of heaven”.

The Holy Father noted that the happiness promised in this final Beatitude is the same as that of the first: the Kingdom of Heaven. “Thus we understand that we have arrived at the end of a unified journey” that gradually unfolded as Christ proclaimed each succeeding Beatitude, the Pope explained. “The Path of the Beatitudes is an Easter journey that leads from a life according to the world to a life according to God”.

The drama of persecution

So, the Pope said, when the world sees people living the beatitudes, there is discomfort that calls for a decision: either to be open to discussion and goodness; or “to refuse that light and harden the heart, even to the point of opposition and rage”.

This shows “the drama of persecution”, the Pope said, but also reveals “the place of liberation from subjugation to success, vainglory, and the compromises of the world”.

Those who reject the trappings of worldliness because of Christ are happy and blessed, Pope Francis said, “because they have found something more valuable than the whole world”.

The Holy Father once more noted, with sorrow, the ongoing persecution of Christians, which is greater now than it was even in the early centuries of Christianity. He said, “we must hope and pray that their tribulation will be ended as soon as possible”, and urged Christians to express their closeness to their persecuted brothers and sisters, “the bleeding members of the Body of Christ, which is the Church”.

He warned us, though, that hearing the final Beatitude should not lead to a self-pitying attitude, or a victim mentality. When Christians are despised by others, it is not always synonymous with persecution. Sometimes we are at fault, he said, because “we have lost the taste of Christ and of the Gospel”.

Pointing to the example of St Paul, Pope Francis noted that when Paul thought he was righteous, he was in fact a persecutor. It was only after he realized that he was such that he converted, and became “a man of love, who faced gladly the persecution he suffered”.

Made to resemble Christ crucified

Pope Francis concluded by saying that facing exclusion and persecution, “if God grants us the grace”, will make our lives resemble the life of Christ, Who for our sake was “despised and rejected by men”.

Accepting Christ’s Spirit in our lives can lead us to truly love the world, even to the point of offering our lives, “without compromising with its deceptions, and even accepting its rejection” of us. This, said Pope Francis, “is the life of the Kingdom of Heaven, the greatest joy, and true happiness”.