Pope at Mass: cherish those who accompany us in life

Pope at Mass: cherish those who accompany us in life 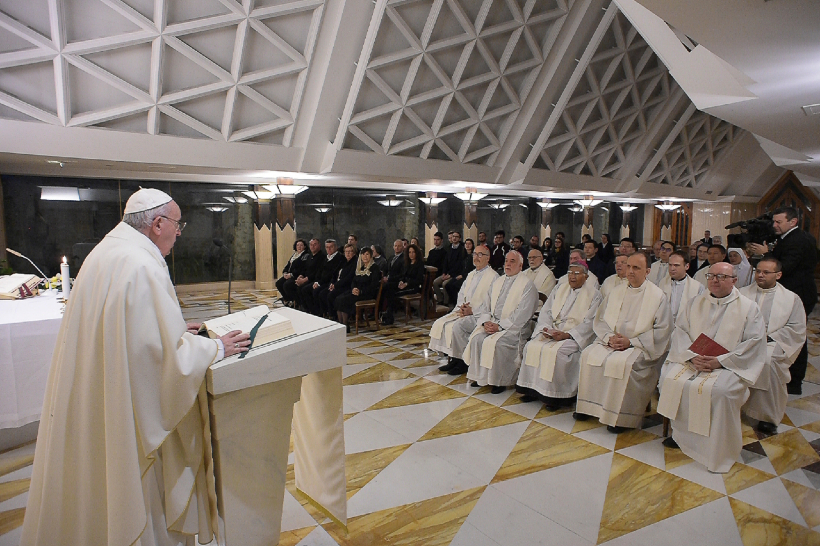 In his homily at Mass at Casa Santa Marta, Friday morning, the Pope invites Christians to remember those who accompany us in life as in a family.

Pope Francis centered his homily on the theme of the family, which he said is not only made up of father, mother, brothers, uncles, and grandparents but also the larger family of those who accompany us on the path of life for some time, at the workplace or at studies.

He took his cue from a retiring Casa Santa Marta employee present at the Mass, Patrizia. The Pope compared Casa Santa Marta, where he lives, to a “large family” made up of people who accompany us on the path of life.  They work there every day with dedication and care, who help if a companion is ill, who feels sad if one of them leaves.

Faces, smiles, and greetings, he said, are like seeds that are sown in everyone’s heart.  At a farewell, it would do us good, he said, to make an “act of memory and thanksgiving” and also an apology to those who accompany us on our journey.

Remembering Patrizia who was leaving after 40 years of service, the Holy Father said that it would do good to those at Casa Santa Marta to think of themselves in a family that accompanies.  Similarly, those not belonging to Casa Santa Marta should think of their neighbors, friends, colleagues at work or study… The Lord wants us to be in company, not alone.  He does not want us to be selfish and selfishness is a sin.

God does not want us to live alone

The Holy Father recalled the generosity of many colleagues at the workplace who take care of those who fall ill.  Every name, a presence, a history, a short stay leaves a mark left behind.

In this regard, the Pope recalled Luisa, Cristina and the grandmother of the house, Sister Maria, who joined work young and decided to consecrate herself there. He also remembered Miriam, who left with her child, and Elvira, an example of struggle in life.  It is difficult, he said, to forget others who have retired or moved elsewhere.

Pope Francis said it would be good for us today to gratefully remember those who accompanied us on the path of life and also in gratitude to God, thanking Him for not leaving us alone. The Pope noted there are always problems where there are people, including at Casa Santa Marta.  One prays and chats and sometimes, he said, one also sins against charity.

A big “thank you”

Sin, patience, and apology for failings are all in the family, the Pope said and made Patrizia’s farewell an opportunity to remember, thank and apologize to all those who accompany us.  He urged all to do so in their own situations.  Offering a “big thank you” to those who work at Casa Santa Marta, the Pope wished Patrizia another 40 years of this second part of her life.