Pope at Mass: Christians without joy are prisoners of formalities

Pope at Mass: Christians without joy are prisoners of formalities 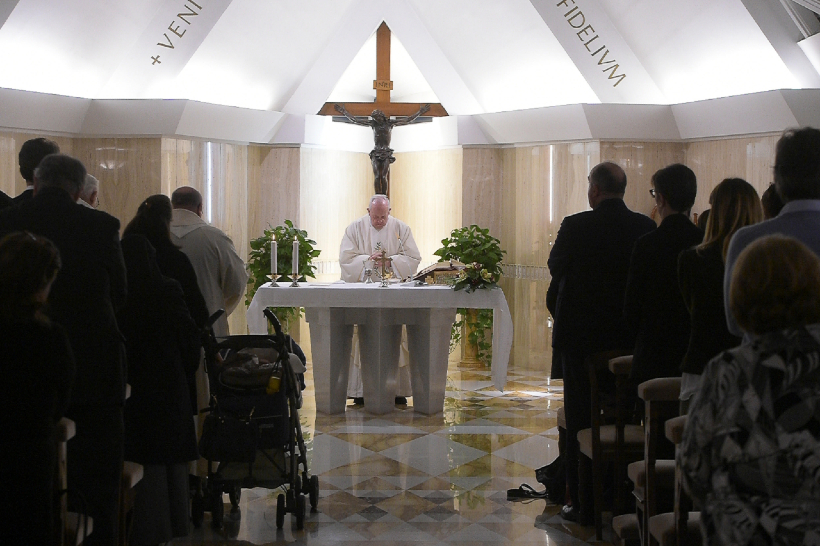 Pope Francis is urging Christians not to be ashamed of expressing their joy of meeting God and feeling His closeness. He made the exhortation at Mass at the Casa Santa Marta Tuesday morning, saying the Gospel will only go ahead with evangelizers full of joy, a joy that also continues in the family at the table together with the Lord.

Pope Francis took the inspiration of his homily from the day’s First Reading, which speaks of the great joy with which David and all the people of Israel were celebrating the return of the Ark of the Covenant to Jerusalem following its capture.

The people felt that God was close to them and they celebrated, the Pope said and leading the procession was King David who sacrificed an ox and a fatling.  He joined the people shouting, singing and dancing “with all his might”.

The fact that God was with them was the cause of their celebration, the Pope said.  David dances before the people expressing his joy without feeling shy.  The Pope said it is the spiritual joy of encountering the Lord, of His return to the people.  David loves the Lord, and he is happy and joyful to bring back the ark of the Lord with dancing and singing like all the people.

The Pope pointed out that we also experience this joy and celebrate when “when we are with the Lord” in our parishes or villages.  In this regard, he recalled that at the time of Nehemiah, in the Old Testament, people wept with joy when the book of the law was found, and they continued their celebration at home.

Continuing David’s story, the Pope said that one of his wives, Michal, Saul’s daughter, reproached him with contempt saying he was dancing shamelessly like a vulgar, like one of the people.

The Pope described Michal’s reaction as contempt of “genuine religiosity” and spontaneity of joy of being with the Lord.  But David explained to her that he was rejoicing in the Lord as the ark was back home.   The Bible says that Michal was punished for this and did not bear children.  Without joy in the heart, the Pope said, a Christian is not fruitful.

Pope Francis further explained that celebration is not only expressed spiritually but becomes sharing. After the blessing, David distributed to each person “a loaf of bread, a cut of roast meat and a raisin cake”, so that everyone could celebrate in their homes. “The Word of God is not ashamed of celebration,” the Pope said, warning, at the same time, of the danger of a joy that goes beyond limits, believing this is everything.

The Holy Father recalled his predecessor, Saint Pope Paul VI in his Apostolic Exhortation “Evangelii Nuntiandi,” saying “the Gospel will not go forward with boring, bitter evangelizers”. “ It will only go forward with joyful evangelizers, full of life.”  The Pope thus urged for the joy of receiving the Word of God, the joy of being Christians, the joy of going ahead, the ability to celebrate without being ashamed and not being like Michal, formal Christians, prisoners of formalities.