Pope at Mass: Experiencing God’s love for us

Pope at Mass: Experiencing God’s love for us 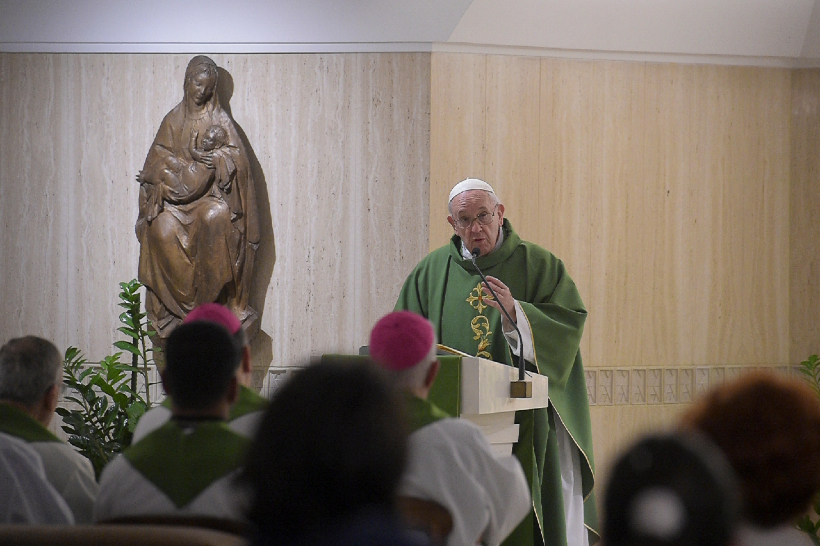 David’s sorrow for the death of his son, who had fought against him, is a prophecy of God the Father’s love for us — a love that extends even to Jesus’ death on the Cross. That was the message of Pope Francis at the morning Mass at Casa Santa Marta on Tuesday.

“My son Absalom! If only I had died instead of you!” This was the anguished cry of David, weeping at news of the death of his son. The Second Book of Samuel tells of the end of the long battle Absalom had waged against his own father, King David, in order to replace him on the throne. Pope Francis described how David had had to flee Jerusalem, “barefoot, his head uncovered, insulted by some, while others threw stones at him because all the people were with this son who had deceived the people, had seduced the heart of the people with promises”.

David’s sorrow shows us the heart of God

Tuesday’s reading shows David waiting for news from the front, and tells of the arrival, finally, of a messenger, who tells him that Absalom had died in the battle. David was shaken at this news, and trembling and weeping, cried out, “My son Absalom! My son, my son Absalom! If only I had died instead of you!” Those who were with him were amazed by this reaction, the Pope said:

“‘But why are you weeping? [they asked.] This person was against you, he had denied you, he had denied your paternity, he had insulted you, he had persecuted you. But celebrate, rejoice that you have won!’ But David [said] only, “My son, my son, my son,” and wept. This weeping of David is a historic fact, but it is also a prophecy. It makes us see the heart of God, what God does when we turn away from Him, what the Lord does when we destroy ourselves with sin, [when we are] disoriented, lost. The Lord is a Father, and He never denies this paternity, [but says] ‘My son, my son’.”

Pope Francis continued by noting that we encounter this weeping of God when we confess our sins. Confession, he said, is not like “going to the dry cleaners” to take away a stain; rather, “it is going to the Father who weeps for me, precisely because He is a Father”.

David’s words — “If only I had died instead of you, Absalom my son” — are prophetic, the Pope said. They show what God actually did. God’s love is the love of a Father, to the point where God Himself, the Second Person of the Trinity, died in our place:

“He became man and died for us. When we look at the crucifix, we think of this: ‘He died instead of you’. And we hear the voice of the Father who in the Son says to us, ‘My child, my child’. God does not deny His children, He does not reject His paternity”.

In Jesus, God dies in our place

The love of God is so great that the Son of God, Who is God, was sent by the Father to give His life for us. Pope Francis said:

It would be good in the difficult moments in our lives — and we all have them — in moments of sin, in moments when we feel far from God, to hear this voice in our hearts: ‘My son, my daughters, what are you doing? Don’t kill yourself, please. I died for you”.

Pope Francis recalled the verse from the Gospel where Jesus wept over Jerusalem. Jesus weeps for us, the Pope said, “because we don’t let Him love us”. Pope Francis concluded his homily with an invitation: “In the moment of temptation, in the moment of sin, at the moment when we are far from God, let us try to hear this voice: ‘My son, my daughter, why?’”