Pope at Mass: God Corrects and Comforts Us With Tenderness

Pope at Mass: God Corrects and Comforts Us With Tenderness 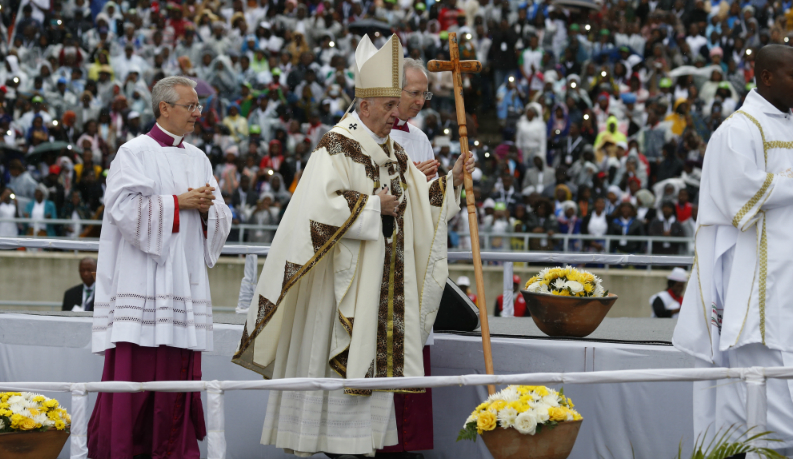 Pope Francis, in his homily at the Mass at the Casa Santa Marta chapel in the Vatican, speaks about how the Lord consoles and corrects us. He reflects on the Parable of the Lost Sheep in Matthew’s Gospel.

The Lord guides His people, comforts them but also corrects them and punishes them with the tenderness of a father, a shepherd who “carries the lambs in His bosom and leads the ewes with care”. This was the heart of the homily of Pope Francis at Mass as he reflected on the Parable of the Lost Sheep, asking how the Lord comforts and corrects us.

The first reading from the Book of Isaiah speaks about God’s consolation for His people Israel as “a proclamation of hope”. “Comfort, give comfort to my people,”, the prophet echoes the words of God saying the tribulation of Jerusalem is over and her guilt is expiated.

Sinner in The Lord’s Bosom?

The Lord always consoles us, the Pope pointed out, provided we allow ourselves to be consoled. And God corrects with consolation, referring to the passage from Isaiah, that speaks of the Lord as the Good Shepherd, who gathers the flock with His arms, carrying the lambs “in His bosom” and leading the ewes with care. Drawing attention to the words “in His bosom”, the Pope said it is an expression of the tenderness with which the Lord punishes, corrects and consoles us. “Can you imagine, in the bosom of the Lord, after having sinned?”

The Pope said that the Lord punishes with tenderness and caresses. This attitude that neither didactic nor diplomatic is a joy that comes from within Him when a sinner approaches Him. “It is joy that makes Him tender,” the Pope said.

Speaking about God’s tenderness, the Pope recalled the Parable of the Prodigal Son, whose father longs for his return. And when he does return, the father cuts short his son’s repentance speech and starts celebrating.

In the Gospel too, the shepherd who returns with the lost sheep and rejoices over it more than over the 99 that were not lost. This, the Holy Father said, is the joy of the Lord when we sinners approach Him and allow ourselves to be forgiven. It is a joy that turns into tenderness and comforts us.

Many times, the Pope pointed out, we complain about difficulties when the devil wants us to fall into the spirit of sadness, embittered by life or our sins.

The Pope noted that many times we complain and think that our sins, our limitations cannot be forgiven. It is that moment when we hear the voice of the Lord, “I comfort you, I am near you”, which overwhelms us with tenderness. The powerful Creator of heaven and earth, the God-hero, so to say, our brother, who allowed Himself to be carried to the cross to die for us, the Pope said, is able to caress us and say, “Do not cry”.

The Widow of Nain

With what tenderness, the Pope wondered, the Lord must have caressed the Widow of Nain when he told her not to weep when she was in front of her son’s coffin. This consolation of the Lord, he said, is the grace of forgiveness.

When one sins and makes mistakes, the Pope said, one should allow oneself to be consoled by the Lord. Ask for forgiveness, be courageous, open the door for Him to caress you with the tenderness of a father and a brother. “Like a shepherd He feeds His flock, in His arms He gathers the lambs, carrying them in His bosom, leading the ewes with care’, so the Lord comforts us,” the Pope said.