Pope at Mass in Mauritius: Be a youthful, joyful, missionary Church

Pope at Mass in Mauritius: Be a youthful, joyful, missionary Church 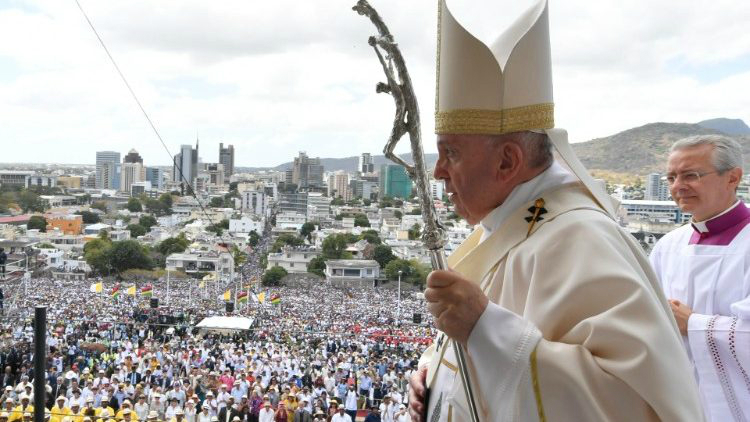 Pope Francis celebrates Holy Mass at the Mary Queen of Peace Monument in Port Louis. In his homily he describes the Beatitudes as “a Christian’s identity card”.

Around 100,000 people attended the Pope’s Mass in Port Louis. That’s roughly 10% of the entire population of Mauritius.

The Mass was celebrated at the Monument of Our Lady, on the slopes of a mountain overlooking the city. The Monument was inaugurated on the Feast of the Assumption in 1940, and was dedicated to Mary Queen of Peace in thanksgiving for keeping the country safe during World War I.

This is where Pope St John Paul II celebrated Mass when he visited the island nation in 1989. In a deeply symbolic gesture of continuity, Pope Francis chose to use the same crozier carried here by his predecessor 30 years ago.

“Before this altar dedicated to Mary Queen of Peace, on this mountain from which we can see the city and the sea beyond, we are part of a great multitude”, said the Pope, “a sea of faces come from Mauritius and other islands of this Indian Ocean region to hear Jesus preach the Beatitudes”.

The Beatitudes were at the heart of the Pope’s homily. They are like “a Christian’s identity card”, he said. “If anyone asks: ‘What must one do to be a good Christian?’ the answer is clear. We have to do, each in our own way, what Jesus told us in the Sermon on the Mount”.

In the Beatitudes, continued Pope Francis, “we find a portrait of the Master, which we are called to reflect in our daily lives”.

Pope Francis went on to recall Blessed Jacques-Désiré Laval, the “Apostle of Mauritian unity”. Quoting Saint Paul, the Pope said Blessed Laval knew that evangelization entails becoming “all things to all people”. That is why “he learned the language of the recently freed slaves and taught them the Good News of salvation in simple language”.

Father Laval’s pastoral care earned him “the trust of the poor and outcast”, said the Pope. “Through his missionary outreach and his love, Father Laval gave to the Mauritian Church a new youth, a new life, that today we are asked to carry forward”.

Missionary momentum, said the Pope, has “a young and invigorating face”. For it is the young, he said, “who can give it the beauty and freshness of youth, when they challenge the Christian community to renewal and urge us to strike out in new directions”.

Pope Francis recognised that this is not always easy. “It means learning to acknowledge the presence of the young and to make room for them in our communities and in our society”, he said.

The Pope then turned his attention specifically to young people. Unemployment “creates uncertainty about the future”, he said, and this “makes them feel that they are on the margins of society; it leaves them vulnerable and helpless before new forms of slavery in this twenty-first century”.

Pope Francis identified young people as “our foremost mission”. We must not speak to them “in an aloof or distant way”, he said, but “learn their language, listen to their stories, spend time with them, and make them feel that they too are blessed by God”.

“Only joyful Christians” awaken in others the desire to follow the path of Christ’s call to be “blessed”, continued the Pope. The word “blessed” means “happy”, he said. “It becomes a synonym for ‘holy’, because it expresses the fact that those who are faithful to God and His word, by their self-giving, gain true happiness”.

Pope Francis concluded his homily at the Mass in Port Louis, confirming that “when young people see the project of a Christian life being carried out with joy, this excites and encourages them”.