Pope at Mass: in the struggle between good and evil choose salvation

Pope at Mass: in the struggle between good and evil choose salvation 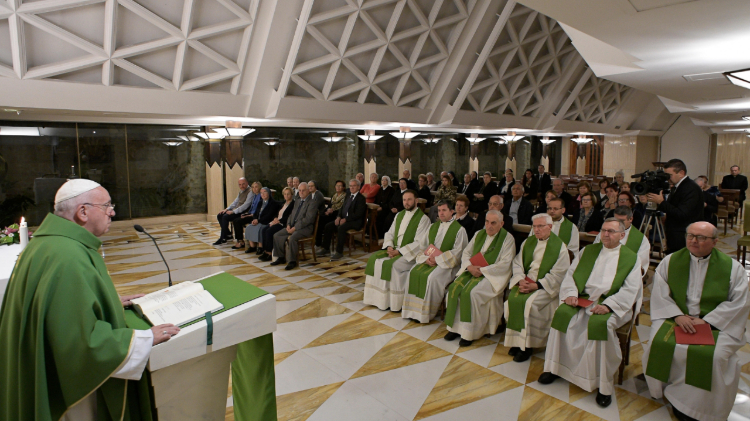 Pope Francis says that in all of us there is a constant struggle between grace and sin. He invites Christians to examine themselves at the end of the day and find out whether their decisions are “from the Lord” or are dictated “by the devil”.

Pope Francis is urging Christians to ask the Lord for the light to know well what is happening inside us.  In his homily at Mass, Friday morning, at the Vatican’s Casa Santa Marta, he reflected on the First Reading where St. Paul speaks to the Romans about the continuous inner struggle inside him between the desire to do good and not being able to do it.

A struggle in all of us

Some might think that by carrying out the “evil he does not want” St. Paul might be in hell or defeated. Yet, the Pope says, he is a saint because even saints experience this war within themselves, between the good that the Holy Spirit inspires and the bad of the evil spirit, It is “a law for all”, “an everyday war”.

Anyone who says he does not have this struggle within and feels blessed and at peace, the Pope tells him or her: “You’re not blessed.  You’re someone who doesn’t understand what’s happening”.

In this daily struggle, the Pope says, we win today, tomorrow and the day after until the end.   The martyrs “had to fight to the end to maintain their faith”.   It’s the same for the saints, like Therese of the Child Jesus, for whom “the hardest struggle was the final moment”, on her deathbed, because she felt that “the bad spirit” wanted to snatch her from the Lord.

According to the Pope, we Christians are often busy in many things, including good things, but he wonders whether we ask what is going on inside and who leads us to them.  “Our life,” the Pope says, “is like life in the street”.  “When we go down the road, we just look at the things that interest us; others, we don’t care.”

Pope Francis says there is always the struggle between grace and sin, between the Lord who wants to save and pull us out of this temptation and the bad spirit that always throws us down in order to win over.   He thus urges Christians to ask themselves whether they walk down the street like one who comes and goes without realizing what is happening and to find out whether their decisions come “from the Lord” or are dictated by our “selfishness”, “by the devil”.

Before the end of the day, the Pope says, one needs to stop for two to three minutes to examine oneself whether anything important has happened that day.  One can find a bit of hatred,  speaking ill of others as well as an act of charity. To understand what goes on inside, one should ask who inspired these acts.  At times, the Pope says, with our gossip mentality, we know what happens in the neighbourhood and in the neighbours’ house but we don’t know what happens inside us.